The Center for Rural Pennsylvania’s Board of Directors approved eight research grant proposals as part of the Center’s 2014 Research Grant Program at its December meeting.

Faculty members of Pennsylvania State University, the State System of Higher Education universities, and a University of Pittsburgh regional campus submitted the successful proposals and will begin their respective research in February.

“This research will continue building on the Center’s past research results and rich database to provide policy and decision makers with information that is unique to rural Pennsylvania and its nearly 3.5 million rural residents,” Senator Gene Yaw, Center board chairman, said.

The approved research grant projects are summarized below.

Evaluating Campaign Success: Ten Years of the United Way in Pennsylvania
Dr. Chad M. Kimmel of Shippensburg University of Pennsylvania will evaluate the success of the annual community fundraising campaigns of all United Ways in Pennsylvania from 2003 to 2013. The research will explore the extent to which community socio-economic and demographic characteristics impact United Way campaign success.

2015 research program
As this year’s grantees begin their projects, the board is identifying topics for the 2015 Research Grant Program. The grant topics will address relevant issues impacting Pennsylvania’s rural residents.

After the topics have been identified, the Center will issue its Request for Proposals (RFP).

For a copy of the 2015 RFP or more information about the Research Grant Program, call the Center at (717) 787-9555 or visit www.rural.palegislature.us. 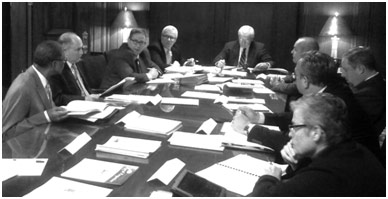 Happy New Year. I hope that many of you had the chance to visit the 98th Annual Pennsylvania Farm Show this January. This traditional welcome to the New Year is the nation’s largest indoor agricultural exposition.  It features some of Pennsylvania’s finest farm animals and food, as well as competitive and commercial exhibits. Every time I attend, I learn something new about our agricultural industry. I’ve even enjoyed competing in the Celebrity Milking Contest.

The Farm Show truly offers something for everyone €“ up close and personal. Whether you’re standing next to prize winning livestock, cheering at the famous rodeos, tasting Pennsylvania’s finest at the Food Court, or checking out the latest farm equipment, the Farm Show is a perfect forum for connecting with our farms and our farm families, who work tirelessly generating our food and fiber.

I am very impressed by the enthusiasm of our young farmers who participate in the various activities of the Farm Show. It is so important to engage our youth in activities that matter to them and to provide our youth with information and experiences on future career opportunities, particularly those that will keep them in our rural communities. The Center for Rural Pennsylvania recognizes the importance of keeping our young folks here.

On Page 4, we highlight the results of a longitudinal study of rural youth that was sponsored by the Center. The study gathered a great deal of information about the educational, career and residential goals of two groups of rural youth over a roughly 6-year period. According to that research, about 32 percent of students who were in 7th grade when the study began wanted to live in rural Pennsylvania as an adult. By the end of the study, 46 percent wanted to live in rural Pennsylvania as an adult. Those percentages are encouraging, and they show that a good number of our younger residents like where they live and see the benefits of living in our rural communities.

However, there was also a large percentage of students who were unsure of where they wanted to live or who wanted to move out of Pennsylvania. This suggests that more work needs to be done to show our youth the opportunities available to them in rural Pennsylvania and the value they add to their communities. Over the course of the next several months, we’ll continue providing data from the survey to provide other insights about the things that are important to our rural youth and some ideas on how we can encourage them to stay in or return to Pennsylvania’s rural communities.

The Center has released the research report, Telehealth in Rural Pennsylvania. The research was conducted by Dr. C.J. Rhoads, Gary Bankston, Justin Roach, Roger Jahnke and William Roth of Kutztown University of Pennsylvania in 2012 and 2013. It set out to describe how and to what extent telehealth is being implemented in rural Pennsylvania and to identify obstacles preventing its wider implementation.

Telehealth is the use of electronic information and telecommunications technologies to support long-distance clinical health care, patient and professional health-related education, and public health and health administration. It has been proposed as a possible solution to meeting the challenges of improving the quality of healthcare while lowering costs and increasing access in rural Pennsylvania.

The report, Telehealth in Rural Pennsylvania, is available on the Center’s website at www.rural.palegislature.us.

The Center for Rural Pennsylvania contracted with Pennsylvania State University researchers in 2004 to begin a longitudinal study of rural Pennsylvania school students to understand their educational, career and residential goals and the factors influencing these goals. The study was motivated by the outmigration of youth and young adults from rural Pennsylvania.

The Center will share the data from this study in this and upcoming installments of Rural Snapshot, specifically focusing on the younger group.

The table below provides the response rates for the younger group during each wave of the study.

Results from the first three waves of the study are available on the Center’s website at www.rural.palegislature.us/publications_reports.html, under the subheading “Education.”

Researchers who want access to the data for further analysis should call or email Jonathan Johnson at (717) 787-9555 or johnsonj@rural.palegislature.us.

Rural Students Who Wanted to Earn a High School Diploma or Less, Waves 1 Through 4

Rural Students Who Wanted to Earn a 4-Year Degree, Waves 1 Through 4

Where Rural Students Want to Live as Adults, Waves 1 and 4

Did You Know: Nuclear Families in Rural Pennsylvania


Just the Facts: Per Capita Income


The latest data from the U.S. Bureau of Economic Analysis indicate that rural incomes are slowly rebounding from the “Great Recession,” which began in 2008.

Although urban incomes are $10,735 higher than rural incomes, the income gap has been narrowing. From 2007 to 2012, the gap between rural and urban per capita incomes declined 11 percent.

The increase in rural incomes was helped along by wage growth. From 2011 to 2012, per capita rural wages increased $302 while unearned income increased $229. Unearned income includes interests, dividends, and rent along with personal transfer payments, such as Social Security, unemployment compensation, and pensions.

During the same period, per capita urban wages increased $135 and unearned income increased $152.

North Dakota had the nation’s largest increase at 14 percent, followed by Montana and Indiana, each with 3 percent.

South Dakota was the only state with a decline in per capita income during this period.

Among all states, Pennsylvania had the 35th highest increase in per capita income at 1 percent.