Following is a summary of the 2016 grant projects.

Evaluation of Community Health Workers in Rural Pennsylvania
Dr. Steven Granich of Lock Haven University of Pennsylvania will conduct a year-long project to determine the characteristics, functions, roles, issues and opportunities for community health workers in rural Pennsylvania. This project, which will include survey research and focus groups, also will develop policy implications for the Pennsylvania General Assembly.

Flood Mitigation for Pennsylvania’s Rural Communities: Community-Scale Impact of Federal Policies
Pennsylvania has incurred and is predicted to suffer significant flooding impacts. Multiple federal policies have attempted to mitigate such impacts, but the costs and effects are not fully understood. Dr. Lara B. Fowler of Pennsylvania State University will conduct a year-long study to estimate the financial and social effects of these policies, including the Biggert-Waters Flood Reform Act and floodplain maps, on commonwealth communities.

The Impact of Minimum Wage Increases in Rural and Urban Pennsylvania
Dr. Pattabiraman Neelakantan of East Stroudsburg University of Pennsylvania will identify industries and occupations in rural and urban Pennsylvania counties that currently pay predominantly minimum wage to workers. He and his research team will then estimate the economic cost-benefits to specific industries, occupations, and demographic groups if the minimum wage is increased by differing amounts.  The research will also assess the impact, if any, on public income maintenance programs.

After the topics have been identified, the Center will issue its Request for Proposals (RFP).

For a copy of the 2017 RFP or more information about the Research Grant Program, call the Center at (717) 787-9555 or visit www.rural.palegislature.us.

The top recommendation made by the presenters was this: heroin and opioid addiction is a chronic disease that should be treated with individualized care. This statement came through loud and clear as the presenters told the Center’s Board of Directors and various legislators attending the hearings how heroin addiction could not be cured. They stressed, however, that this addiction could be treated, and how, with proper treatment, individuals could have stable, fulfilling lives in recovery.

Other recommendations made by presenters included restoring funding to Single County Authorities for drug and alcohol treatment, ensuring the compliance of both federal and state laws addressing health insurance coverage for the treatment of alcohol and drug addiction, requiring continuing medical education credits on pain management and prescribing practices of opioids, and continuing the expanded use of naloxone among local police departments in Pennsylvania.

With the release of this second report, the Center’s board and staff are hoping that steps will be taken to address the recommendations made in both reports.

In the state Senate, Sen. John Wozniak, the Center’s vice chairman, and I will be introducing legislation to address a specific recommendation that came from the presenters on continuing medical education on pain management and prescribing practices of opioids. At the hearings, several presenters told us about the increased use of opioids in the late 1980s and early 1990s for chronic, non-cancer pain relief; however, there remains very little formal training on addiction and prescribing practices in medical schools or residencies. According to a National Survey of Primary Care Physicians, nine out of 10 doctors reported prescription drug abuse as a moderate to large problem in their communities, and 85 percent believed that prescription drugs are overused in clinical practice. We know that effective medical education is a critical part of this complex issue, and we believe this will help alleviate the rising abuse of prescription opioids.

On behalf of the Center’s Board of Directors, thank you to everyone who presented at, presided over, and attended the hearings. Together we’ve made some progress in bringing the issue of heroin and opioid addiction out of the shadows, and addressing the needs of those suffering from addiction €“ our family, friends, and neighbors.

On December 7, 2015, the Center for Rural Pennsylvania’s Board of Directors released the second report on the heroin epidemic in Pennsylvania at a press conference at the Capitol. The report, Heroin: Combating this Growing Epidemic in PA €“ Findings Compiled from Statewide Hearings on Addiction Treatment and Recovery Services, is available at www.rural.palegislature.us.

A Note on the Analysis
For this Snapshot, the Center used data from the Pennsylvania Department of Education's 2014-15 Professional Personnel Individual Staff Report. The Center limited its analysis to full-time, active, classroom teachers who taught in a public school district. The total number of teachers in the Center's analysis (104,898) differs from the total number of teachers in the department's summary table (105,903). This difference is largely attributed to the exclusion of teachers who were not active (teachers on sabbatical, suspension, or workers compensation) in the Center's analysis. The difference of 1,008 classroom teachers is spread across 202 school districts; 56 percent of which had a discrepancy of two or fewer teachers. Additionally, when teachers were assigned to more than one category, such as music, English, and math, the Center only counted them once for the number of years teaching, educational attainment, gender, and annual salary. This filter was removed when analyzing teacher assignments. Finally, there were no data for the Bryn Athyn School District. 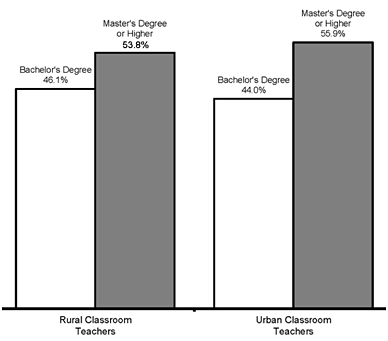 Classroom Teachers by Grade and Gender, 2014-15 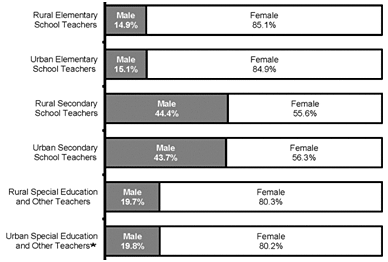 Classroom Teachers by Number of Years in Education, 2014-15 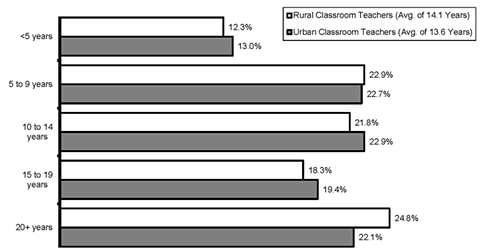 Heritage tourism is an important segment of Pennsylvania’s overall tourism economy, supporting significant numbers of businesses and jobs. According to research sponsored by the Center for Rural Pennsylvania and Heritage PA and conducted by Dr. John M. McGrath of the University of Pittsburgh at Johnstown and his team of researchers, tourists spent an estimated 7.5 million days/nights in Pennsylvania’s 12 Heritage Areas in 2014, purchasing $2 billion worth of goods and services. The total contribution of heritage visitor spending, including direct, indirect and induced effects, to the state’s economy was 25,708 jobs and $798 million in labor income.

The research, conducted in 2014-2015, studied five Pennsylvania Heritage Areas: PA Route 6, National Road, Allegheny Ridge, Lincoln Highway, and Susquehanna Gateway. The research involved a survey of heritage-area visitors, interviews with stakeholders in the five study heritage areas (HAs), and an estimation of the economic impact of the heritage-related visitation to all 12 HAs statewide.

The research found that the five study HAs contribute positive economic benefits to their local geographic regions by facilitating economic development projects and bringing visitors. Results from the visitor surveys also found that approximately 70 percent of visitor spending and associated economic effects would be lost to these regions if heritage anchor attractions were not available. The importance of these individual attractions was underlined by one finding that indicated low awareness of the concept of a “heritage area” as well as the existence of the overall HA Program.

Based on the research findings, the research team recommended several actions to improve aspects of the HA Program including a meeting between HA staff and key Department of Conservation and Natural Resources (DCNR) leaders to develop a statewide roadmap for the future of the HA Program. For a copy of the research results, The Economic Impact of Pennsylvania Heritage Areas, visit www.rural.palegislature.us.

According to the most current estimates from the Centers for Disease Control and Prevention (CDC) from 2012, nearly one out of three (32 percent) rural Pennsylvania adults is obese. Since 2004, the number of rural adults who are obese increased 23 percent.

Among urban adults, the CDC estimates 28 percent are obese. From 2004 to 2012, the number of urban adults who are obese also increased 23 percent.

The CDC’s identifies obese adults as those individuals 20 years old and older with a body mass index of 30 or greater. The data for the CDC estimates were derived from individuals who self-reported their height and weight.

In rural Pennsylvania, males were more likely to be obese (33 percent) than females (31 percent). In urban Pennsylvania, the obesity rate among males and females was identical (28 percent).

Nationwide, 27 percent of adults were estimated to be obese. From 2004 to 2012, the number of adults who were obese increased 29 percent. 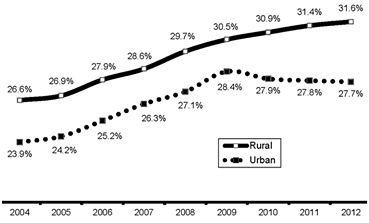 Just the Facts: One Plus One