More than 467,500 rural Pennsylvanians, or 14 percent of the rural population, lived in poverty in 2010, according to U.S. Census Bureau estimates for that year. From 2006 to 2010, the number of rural residents in poverty increased 13 percent.

In urban counties, approximately 1.18 million people, or 13 percent of the urban population, lived in poverty in 2010. From 2006 to 2010, the number of urban residents in poverty increased 14 percent.

The increase in poverty is not unique to rural and urban Pennsylvania. Across the nation, 46.2 million people lived in poverty in 2010, a 19 percent increase from 2006.

Compared to other states, Pennsylvania had the 31st highest poverty rate of 13 percent. Mississippi and New Mexico had the highest rates of more than 19 percent, while Maryland and New Hampshire had the lowest rates of less than 10 percent.

Within Pennsylvania, Forest, Fayette, and Philadelphia counties had the highest poverty rates, each at or above 20 percent. The three southeast counties of Bucks, Chester, and Montgomery had the lowest rates, each with less than 7 percent.

Among rural residents in poverty who were under 65 years old, 21 percent did not have health insurance.

Forty percent of rural householders in poverty were homeowners and 60 percent were renters.  Among renters, the median gross rent was $580 a month, or approximately 60 percent of their household income.

On behalf of the Center's Board of Directors, I welcome our newest board members Representative Garth Everett and Representative Rick Mirabito. The board looks forward to their contributions and welcomes their expertise and experience on rural issues.

Last year, Hurricane Irene and Tropical Storm Lee caused some devastating damage across Pennsylvania. As of February 13, the damage statewide totaled more than $11.3 million. Of that amount, $4.6 million in damages occurred in 21 rural Pennsylvania counties, the majority of which sit in the eastern region of the state.

While much of the media attention about the impacts of that hurricane and storm has subsided, the damage that these storms caused in our rural counties is still visible today. And many rural residents are still trying to clean up their communities and prevent this magnitude of flooding from happening again.

To learn firsthand from rural residents and officials about the challenges they face in clearing the region's stream channels to minimize the danger of future flooding, I participated in a listening session on stream cleaning hosted by the Center for Rural Pennsylvania on January 19. The session was held at the Sullivan County Conservation District and Agriculture Center in Dushore, Pa. At the session, local elected officials and local business owners and residents from the affected counties of Bradford, Lycoming, Sullivan and Susquehanna, along with members of the Pennsylvania Farm Bureau, offered testimony regarding the flooding and its impact.

At the session, we heard that the region is still dealing with the aftermath of the flooding, and attendees offered advice on what could be done at the state level to help those affected. The information compiled at the session is being shared with the legislature and executive branch agencies to review policies or regulations that could better address any ongoing issues.

In the coming weeks, Center Director Barry Denk and I will be hosting Pennsylvania Department of Environmental Protection Secretary Michael Krancer and Department of Agriculture Secretary George Greig on a tour of portions of the northeast region to see firsthand some of the impacts highlighted by local residents at the January listening session.

From there, we'll work with the secretaries and their departments to address the concerns that residents have, and we'll be sure to keep you up-to-date on the results of that tour and any subsequent actions taken to sort out the issues. 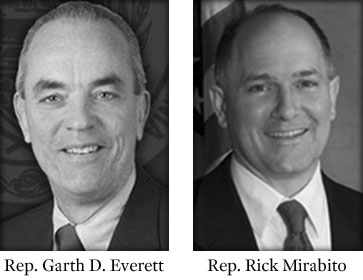 Rep. Everett serves the 84th Legislative District, which includes parts of Lycoming County. He was first elected to the state House of Representatives in 2006 and serves on the Agriculture and Rural Affairs, Environmental Resources and Energy, Game and Fisheries, and Veterans Affairs and Emergency Preparedness committees.

Prior to serving in the House, he served on active duty in the U.S. Air Force for more than 20 years. After retiring from the Air Force, he attended and graduated from Penn State's Dickinson School of Law.

He is a board member of the River Valley Regional YMCA and a member of the National Rifle Association, VFW, American Legion, and Highland Lake 40 & 8.

Rep. Mirabito serves the 83rd Legislative District, which includes parts of Lycoming County. He was first elected to the state House of Representatives in 2009. He serves on the Agriculture and Rural Affairs, Commerce, Finance, and Local Government committees.

Prior to serving in the House, he served as court counsel to the Supreme Court in the island nation of the Republic of Palau and as a law clerk to a U.S. District Judge in Williamsport. He graduated from Cornell University and Boston College Law School.

Although the number of rural females and males is close, there are some demographic and socio-economic differences between the genders, according to data from the U.S. Census Bureau's 2010 American Community Survey Public Use Microdata Sample (ACS-PUMS). Following is a rundown of the 2010 data.

The poverty rate for rural females was highest among those under 18 years old at 19 percent, followed by those aged 18 to 64 years old at 14 percent and senior citizens at 9 percent.

Rural females who were divorced or separated had a higher poverty rate (26 percent) than to those who were married (5 percent).

Bullying, according to the Pennsylvania Department of Education's Safe Schools Office, is an intentional electronic, written, or verbal act, or series of acts, that is severe, persistent or pervasive. It is directed at one or more students, substantially interferes with another student's education, creates a threatening environment, or disrupts the orderly operation of the school.

To determine if there were any relationships between the number of reported bullying incidents in rural schools and certain social, economic and academic variables, the Center for Rural Pennsylvania analyzed data from the Pennsylvania Department of Education and the U.S. Census Bureau. For the analysis, the Center combined three years of bullying data (2007-08, 2008-09, and 2009-10) and compared them with school district socio-economic and academic data, including household income, types of households, poverty rates, educational attainment, school test scores, student-teacher ratios and school revenues/expenditures.

There appeared to be few differences between rural districts with incidents of bullying above and below the statewide average. For example, both had similar total school expenditures per student, comparable percentages of students who were eligible for the free and reduced school lunch program and nearly comparable percentages of students scoring below-basic in the PSSA math and reading tests.

In summary, the number of reported incidents of bullying from 2007-08 to 2009-10 doubled. This increase could be the result of better reporting by school districts and an increased awareness of bullying.

Second, bullying incidents are not limited to districts with unique characteristics, such as low-test scores among students, or high poverty rates in the district. Instead, bullying appears to be a statewide issue, and not one that is pervasive in strictly rural or urban school districts.

Just the Facts: Homelessness
In late March 2010, Census Bureau enumerators went to emergency and transitional shelters to count the number of people who were homeless on that particular day. In Pennsylvania rural counties, the enumerators counted a total of 1,009 individuals. In the state's urban counties, they counted 7,278 persons.

According to the National Coalition for the Homeless, people experiencing homelessness in rural areas are less likely to live on the street or in a shelter and more likely to live in a car or camper, or with relatives in overcrowded or substandard housing.

According to HAP's client report, in rural counties, 60 percent of those who benefited from assistance were adults and 40 percent were children. Approximately 2 percent of the rural adult clients were veterans.  These percentages are very similar to those in urban counties.