Research on the rural homeless, conducted by Dr. Heather Feldhaus and Avi Slone of Bloomsburg University and sponsored by the Center for Rural Pennsylvania, found that homelessness in rural counties increased in the past 5 years and rural clients had slightly higher rates of mental health and substance abuse issues than urban clients.

Research background
Homelessness is a difficult issue to document since the homeless population is largely hidden, stigmatized and transient. Documenting rural homelessness is even more complex since many people in rural areas do not have access to more formal services, such as shelters, and tend to use more informal networks, such as friends or family, for assistance.

To conduct their research and overcome some of these difficulties, Feldhaus and Slone analyzed existing data on the homeless collected yearly by the federal Department of Housing and Urban Development through its Continuum of Care sites, surveyed professionals who work with the rural homeless, and summarized information gathered at two homelessness summits in Pennsylvania in 2012 and 2013.

In their analyses, the researchers found that limitations associated with the available data on rural homelessness are substantial. These include the challenges of counting unsheltered homeless in large geographic areas and the various data collection systems being used by service providers.

From the data that were available, the research found clear differences among the homeless in rural and urban areas and an increase in the number of homeless counted in rural areas.

According to the research, regional differences exist between rural parts of the state both overall and in the rates of homelessness among veterans and the chronically homeless.

The survey results indicated a rise in homelessness in the past 5 years, particularly in rural counties; these results corresponded with data patterns at the state and regional levels. The survey results also indicated slightly higher rates of mental health and substance abuse issues among rural clients. The survey respondents were concerned about the inconsistencies in the definitions of homelessness used by different agencies, organizations, and programs, and with the definitions that exclude clients who are living temporarily with family or friends.

This research underscores the point that inconsistency in data collection methods represents a lost opportunity to help increase the understanding of and the ability to track homelessness at the state and local levels.

Information from the homelessness summits confirmed the data weaknesses identified in the research.

For a copy of the report, Homelessness in Rural Pennsylvania, visit http://www.rural.palegislature.us/publications_reports.html or call the Center at (717) 787-9555.

Research conducted by faculty from Penn State University and sponsored by the Center for Rural Pennsylvania found that the number of hate and bias incidents in Pennsylvania increased from 1999 to 2012. The research also found that criminal incidents showed high fluctuations, but were roughly flat overall, while both civil incidents and tension incidents, which are non-criminal acts of bias that may inflame a community, increased during the approximately 14 years examined. Hate group activity varied greatly from year to year.

According to the research, which was conducted in 2014, cases of prosecuted ethnic intimidation (the hate crime statute in Pennsylvania) remained at low levels.

In addition to the PHRC data, the researchers used demographic, social, and economic data from the U.S. Census Bureau, and data from the U.S. Department of Education for analyses related to incidents at higher education institutions.

The research found that, across the 1999-2012 period, there were no significant differences in the rates of hate and bias incidents per 100,000 population.

In about 35 percent of the overall incidents in the dataset, the offender was not known. Of the cases in which the offender was identified, most were individuals or small groups of individuals, as opposed to organized groups, and were disproportionately white.

As compared to incidents when an individual offender was identified, when hate groups were identified, the incident was less likely to involve a crime. If a crime occurred, an arrest was more likely if a hate group, rather than an individual, was involved. Hate groups largely engaged in noncriminal acts such as rallies, protests, and distribution of literature.

The research found that both law enforcement and civil rights agency responses to hate and bias incidents increased over time, but especially by civil rights organizations.

The research also found that 4 percent of hate and bias incidents occurred at higher education institutions.

It is important to recognize that the findings from this study are limited since the PHRC data disproportionately represent some areas of the state. In addition, because some reports in the PHRC database are not verified, some reported incidents may not have been discriminatory or motivated by bias. Despite these limitations, the PHRC database is the best source for examining hate and bias incidents in Pennsylvania.

At the March meeting of the Center’s Board of Directors, the board approved a list of targeted topics for the Center’s 2016 Research Grant Program Request for Proposals, or RFP. Every March, the Center issues its RFP, which provides details on the research program and lists specific topics for research, which currently include emergency medical services, community health workers, local parks and recreation areas, the impact of minimum wage increases, wildlife tourism, unemployment and underemployment, public transportation, and changes in homeownership.

The program is open to qualified faculty members of Pennsylvania State University, the State System of Higher Education universities and the regional campuses of the University of Pittsburgh, which are in Bradford, Greensburg, Johnstown and Titusville. We encourage them to submit their Letters of Intent for the program and to partner with other academic institutions, community organizations, and other public and private agencies if suitable.

Some fine examples of the research sponsored by the Center are featured in this issue of Rural Perspectives. The research provided some very important insights and information about two topics that are not often studied in rural areas, namely homelessness and hate and bias incidents.

For the study on homelessness, the research team from Bloomsburg University found that limitations associated with the available data on rural homelessness were substantial. The research team from Penn State University who studied hate and bias incidents also used data that had specific limitations, such as the way data were collected. However, both studies provided results that offer a clearer picture of both issues. And ultimately, the results from both studies indicate how important reporting is to address and combat both homelessness and hate and bias occurrences across Pennsylvania. Copies of both reports are available online or by calling the Center.

At the March meeting, the Center board welcomed its newest member, Representative Sid Michaels Kavulich. The board looks forward to his contributions and welcomes his expertise and experience on rural issues.

I would also like to thank all of the Center’s board members for their commitment to the Center, their continuing support and their active participation to help ensure the work of the Center remains timely and relevant to its mission.

In February, the Center for Rural Pennsylvania welcomed Representative Sid Michaels Kavulich to the Board of Directors. Representative Kavulich represents the 114th Legislative District in northeastern Pennsylvania, which includes portions of Lackawanna, Luzerne, Susquehanna and Wyoming counties.

He was first elected to the state House of Representatives in 2011 and serves on the Agriculture and Rural Affairs, Finance, Game and Fisheries, Gaming Oversight and Local Government Committees and the Committee on Ethics.

Prior to serving in the House, he was a communications specialist for the Pennsylvania Democratic Senate Communications Office, a broadcaster for several radio and television stations in northeastern and central Pennsylvania, and general manager of St. Ann’s Media at St. Ann’s Basilica in Scranton.

Rep. Kavulich is involved with several civic organizations, including Catholic Social Services of the Diocese of Scranton, where he served as president. He is also a member of Broadway Theatre League of Northeastern Pennsylvania, the Abington Rotary and the Stephanie Jallen Group.

Rural and Urban Households With and Without Internet Service, 2013 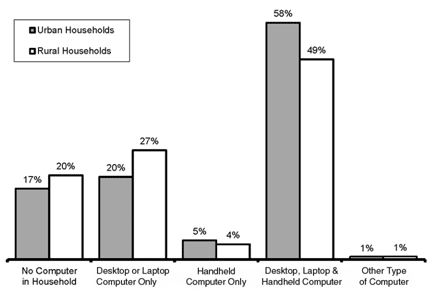 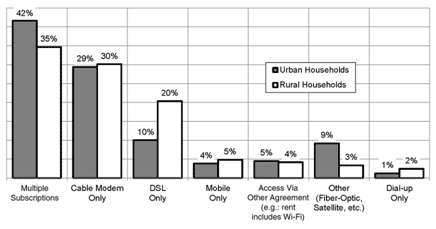 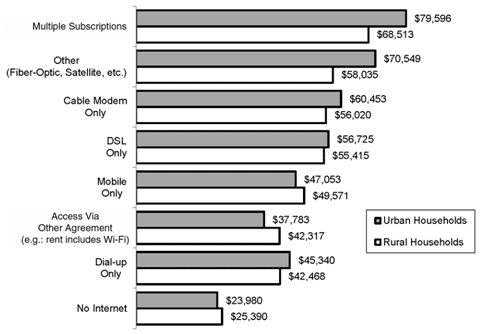 Homes With Internet Service by Age of Householders, 2013 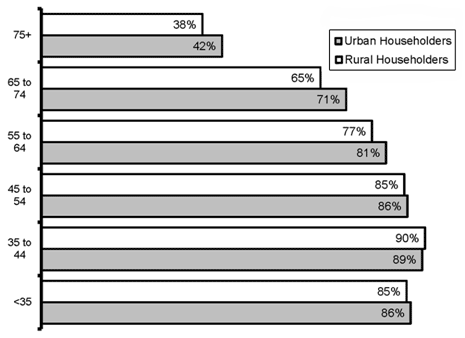 Profile of Rural and Urban Households With and Without Internet Service, 2013

Percent of Rural and Urban Municipalities with Email Addresses, 2015 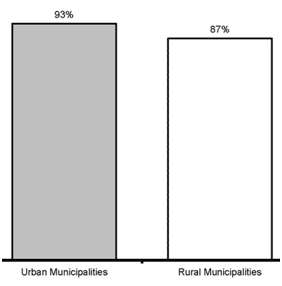 Data from the U.S. Department of Education’s National Center for Education Statistics (NCES) showed that, nationwide, in 2011-12, the most current year for which data were available, there were 3.96 million private school students, or 7 percent of all students.

Profile of Rural Households with Students in Private, Public and a Mix  of Schools, Grades K-12, 2013* 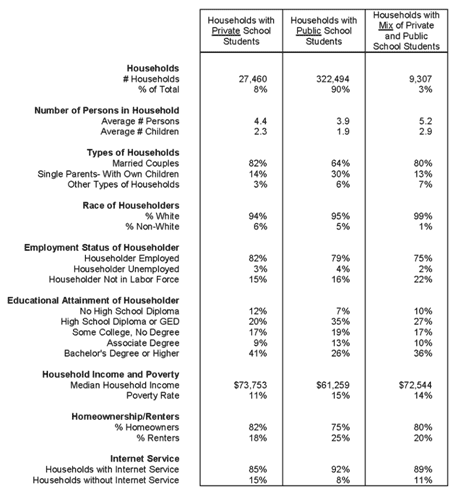 *Note: Profile includes households with children, age 5 to 18, enrolled in grades K-12 who have not yet received a high school diploma. Households with a “mix,” have some children enrolled in public schools and others enrolled in private schools. Data source: U.S. Census Bureau’s 2013 American Community Survey, Public Use Microdata Sample (ACS-PUMS).

According to 2013 data from the Pennsylvania State Police (PSP) Uniform Crime Report, there were fewer serious crimes reported in rural counties than in urban counties.

In 2013, there were 64,594 serious crimes reported in rural Pennsylvania, or 1,874 crimes per 100,000 residents. According to the PSP data, these crimes included both violent crimes, such as criminal homicide, rape, aggravated assault, burglary, and robbery, and property crimes, such as motor vehicle theft, larceny theft, and arson.

From 2012 to 2013, serious crimes throughout Pennsylvania declined. Rural counties experienced a 3 percent decline and urban counties had a 6 percent decline in reported crimes.
In rural counties, property crimes accounted for 90 percent and violent crimes accounted for 10 percent of serious offenses in 2013. In urban counties, 85 percent of serious offenses were property crimes and 15 percent were violent crimes.

The PSP data indicated that, in 2013, Philadelphia, Dauphin and Lehigh counties had the highest serious crime rates in Pennsylvania overall, each with crime rates above 2,850 per 100,000.

The counties with the lowest serious crime rates in 2013 were the rural counties of Juniata, Armstrong, and Union, each with rates under 1,050 per 100,000.