Pennsylvania’s 19 urban counties experienced a 4 percent increase in population over the past decade. From 2000, the urban county population grew by about 347,000 to total 9.2 million in 2010. Urban residents make up 73 percent of the commonwealth’s population.

Ups and downs
The increase in Pennsylvania’s rural population was tipped toward the eastern region of the state. These counties, which include Carbon, Juniata, Monroe, Pike, Union, Wayne and Wyoming, had an average population gain of 7 percent. Rural counties in the western region of Pennsylvania had a 1 percent decline.

Throughout rural Pennsylvania, approximately 21 percent of the population was younger than 18 in 2010. That is a 2 percentage point decline from 2000.

Digging deeper
To gain a better understanding of why some rural counties gained population and others did not, the Center for Rural Pennsylvania analyzed data from the 2005-2009 American Community Survey (ACS), the Pennsylvania Department of Health, and the Internal Revenue Service (IRS).

While these data cover slightly different time periods than the 2000 to 2010 Census data and cannot be compared with the Census data, they do provide an in-depth look at the characteristics of rural counties and offer further insight about the counties that gained and lost population.

Over the past decade, in-migration has positively affected the rural population more so than births.

Also, Pennsylvania’s rural population is aging as there continues to be a decline in the number of residents who are under 18 years old.

For more information on the Center’s definition or rural and urban counties and school districts, visit the Center’s website at www.rural.palegislature.us. Updates to the Center’s municipal definition will be made after the U.S. Census Bureau releases urbanized data in 2012. 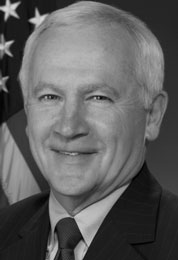 As the new Board Chairman of the Center for Rural Pennsylvania, I am eager and optimistic to continue the exemplary work of my predecessors to address important rural needs and trends.

I am no stranger to the myriad issues affecting many of our rural communities.  Elected to the State Senate in 2008, I represent the second largest rural district, which consists of Bradford, Lycoming, Sullivan, Susquehanna and Union counties. As a result, I have a vested interest in the policy considerations of the Center’s research programs and its extensive database on rural trends and conditions. In addition, I find the Center’s information and services to be very helpful to myself and my constituents.

In April, my first official act as Board Chairman involved the approval of targeted topics for the Center’s annual Research Grant Program. The topics for potential research cover a wide range of issues, including an examination of century farms, the implementation of electronic health records in rural Pennsylvania, an examination of postsecondary educational debt, and guardianship services in the state.

Additionally, as a result of the Marcellus Shale industry in Pennsylvania, the Center will take an in-depth look at four rural counties over multiple years and focus on a number of indicators in the areas of economic development, com­munity services and infrastructure.  Increased investment driven by the natural gas industry has resulted in the growth of new businesses locating to Pennsylvania, the expansion of many existing businesses, increased job opportunities and a greater need for residential and commercial infrastructure to serve this growth.

I am hopeful that faculty from Penn State, the State System of Higher Education universities and the regional campuses of the University of Pittsburgh, who are eligible for the Center’s Research Grant Program, will present some very competitive proposals on this topic.

Ultimately, this research will contribute a wealth of information on the natural gas industry’s economic and social impact in Pennsylvania.

For more information on the 2012 Request for Proposals and the full list of targeted topics, I encourage you to visit the Center’s website at www.rural.palegislature.us.

Once again, I look forward to my role as Board Chairman and will ensure that the Center’s continued viability in the state, especially rural Pennsylvania, will continue.

The Center for Rural Pennsylvania’s Board of Directors welcomed Stephen M. Brame and Taylor A. Doebler III to the board in April. Mr. Brame and Mr. Doebler were appointed to the board by Governor Tom Corbett.

Among his responsibilities in the Lieutenant Governor’s office were legislative priorities, General Assembly relations and communications strategy.

Mr. Doebler is the recipient of the 2010 Mid-Atlantic Master Farmer award.

The nation’s urban population increased 11 percent during the last decade. In 2010, there were 228.4 million urban residents or 74 percent of the nation’s population.

From 2000 to 2010, Delaware, Florida, Hawaii, and Utah had the highest rural population increases, with each realizing a 20 percent or more increase in its rural population. Over the past decade, eight states had declines in their rural population. They are Arkansas, Iowa, Kansas, Louisiana, Mississippi, Nebraska, North Dakota, and South Dakota.

These days, child care is a regular experience for many children during their early years. Research has shown that children who attend higher quality child care enter school better prepared and continue to do better in the early years of schooling.

The research found that the majority of licensed child care available in both rural and urban counties was child care centers (84 percent and 92 percent, respectively), followed by family child care and group homes.

The research also revealed that the majority of providers participating in the Keystone STARS program were child care centers. This was true for providers in both rural and urban counties.

The results indicated that the overwhelming majority of children in rural counties who received child care subsidies were cared for in regulated child care settings. However, there was considerable county-by-county variability.

Distance learning (DL) is a promising way to enable geographically isolated youth and adults to obtain a GED (General Educational Development) credential. In DL courses, students may complete all or part of an educational program in a separate location from the institution hosting the program. Typically the program incorporates print, television, video, radio, the Internet, or other technologies.

In 2009-2010, Dr. Esther Prins, Brendaly Drayton and Ramazan Gungor of Pennsylvania State University and Dr. Cathy Kassab investigated the types, use, and effectiveness of DL for GED candidates in rural Pennsylvania to provide information on enhancing DL study options.

Specifically, the study, which was sponsored by the Center for Rural Pennsylvania, sought to: identify the types and use of GED distance education in rural Pennsylvania; describe the demographic characteristics and participation patterns of rural GED students in DL and face-to-face classes; determine the effectiveness of DL in preparing rural students to pass the GED tests; assess the cost of DL provision; and examine the advantages and disadvantages of DL for GED study.

The data sources used by the researchers included the Bureau of Adult Basic and Literacy Education’s (ABLE) e-Data system and GED Demographics survey, a telephone survey of non-ABLE DL providers, and telephone interviews with a key informant and DL staff and students from ABLE-funded programs. Other data used for the study included: the ABLE-funded Distance Learning Project’s student record, survey, and cost data; and a 2007 survey of ABLE-funded DL agencies.

According to the research results, from July 1, 2004 to December 31, 2008, 4 percent (975) of rural students in ABLE-funded GED classes participated in DL, with 47 percent of their instructional hours in DL. About 75 percent of these students participated in DL and face-to-face instruction. The research identified only four non-ABLE-funded organizations that provided GED DL classes for rural students.

The research found that DL is as effective as face-to-face classes in preparing students to pass the GED tests. The pass rate for rural DL students was 75 percent, compared to the national rate of 73 percent in 2008.

The effectiveness of DL, coupled with the limited number of DL providers and students using these services, indicates great potential for the expansion of DL in rural regions.

The estimated average cost of DL provision for Pennsylvania adult learners ($361 to $688 per student) was comparable to other states.

Print-plus-computer was the most common DL instructional format. Despite the limitations of print materials, they are widely used because programs and students lack the technological and financial resources that interactive, online instructional tools require. These results highlighted the need to provide professional development and financial resources for technologically sophisticated instruction, and to ensure affordable broadband and computer access in rural areas.

In addition, 22 percent of rural DL students are single parents; 35 percent are employed; and 38 percent receive cash or in-kind public assistance. A substantial minority (18 percent) of rural DL students have learning or other disabilities. These characteristics indicate a need for basic-level instructional resources and support services to overcome barriers to DL participation.

To take and pass the GED tests, rural DL students need to access testing sites. In 2009, about three out of four rural Pennsylvania counties had at least one public GED testing site.

In general, the research found that DL offers students: more options to study for the GED tests, enhanced academic growth, convenience and flexibility, the ability to combine GED study and work, the ability to study independently and at their own pace, and confidentiality.

The perceived disadvantages and challenges of DL were students’ restricted computer and Internet access, limited awareness of DL’s existence and value, insufficient DL funding, and educational issues such as teacher-student communication, provision of timely help and feedback, and student struggles with isolation, time management, and difficult subject matter.

Nearly one quarter of Pennsylvania’s 31,662 bridges is structurally deficient, according to 2010 data from the Pennsylvania Department of Transportation (PennDOT)

As PennDOT defines it, structural deficiency is an indication of a bridge’s overall structural soundness and its ability to service the traveling public. A structurally deficient bridge has deterioration to one or more of its major components.

In rural Pennsylvania, 24 percent of the 18,550 bridges are considered structurally deficient.

In urban Pennsylvania, nearly 23 percent of the 13,112 bridges are structurally deficient.

Among locally owned rural bridges, about 36 percent are structurally deficient.

From 2007 to 2010, the average sufficiency rating of a state-owned rural bridge rose from 76 to 78, while the average rating of a locally owned rural bridge dropped from 67 to 66. Sufficiency ratings indicate a bridge’s performance capability on a scale of 0, which is entirely insufficient, to 100, which is entirely sufficient.

Of the 31,662 bridges in Pennsylvania, more than 50 percent were constructed before 1960. In rural Pennsylvania, the average state-owned, structurally deficient bridge is 64 feet long and was built in 1938.

The average locally owned, structurally deficient bridge in rural Pennsylvania is 52 feet long and was built in 1935.

To ensure safety, PennDOT has closed some bridges or has imposed weight limitations on them.

Of the structurally deficient bridges in rural areas, 2 percent of state-owned and about 9 percent of locally owned bridges are closed or temporarily closed.