The research, sponsored by the Center for Rural Pennsylvania, analyzed 2007 to 2010 data from the Pennsylvania Department of Community and Economic Development’s (DCED) Survey of Financial Condition (SOFC) and found that about 9 percent of rural and 18 percent of urban municipalities were experiencing symptoms of financial distress.

The research also indicated that municipalities experiencing the most symptoms of distress were clustered in the northeast and southwest regions of the state.

The researchers collected the data on all 2,562 cities, boroughs and townships in Pennsylvania and defined a symptom of financial distress as any “yes” answer on the SOFC form, if the question matched the criteria of financial distress established by the Municipalities Financial Recovery Act of 1987 (53 P.S. §§ 11701.101 to 11701.501 and all amendments), also known as Act 47. The researchers controlled for a municipality’s status as rural or urban and its type as a city, borough, township of the first class or township of the second class.

Municipalities answered “yes” 155 times to the SOFC questions in 2007 compared to 286 times in 2010, indicating that the frequency of distress had increased. These symptoms impacted approximately 2.1 million people, 268,840 of whom lived in rural municipalities.

The most common reason for a municipality answering yes to a SOFC question, regardless of the type of municipality, was an excess of expenditures over revenues for 3 or more years. Accumulated deficits of 5 percent or more for 2 consecutive years were also very common.

The municipalities experiencing the most symptoms of distress were clustered in the northeast and southwest regions of the state. The researchers conclude that this distress was likely caused by the migration of the coal and steel industries from these regions several decades ago.

The researchers note that while the commonwealth’s early warning system encourages collaboration, it will be interesting to see whether the efforts of individual municipalities can mitigate the chronic symptoms of financial distress found in these regions, since the remedies for long-term, structural distress usually require significant, new, economic development efforts.

According to the research, financial distress at the municipal level is an inter-governmental problem. It can make state government unstable by threatening its bond-ratings, and putting pressure on it to deliver public services if the distressed municipalities become unable to do so. Municipal financial distress can also affect the willingness of new businesses to move into the area.

The research concludes that state government can play an important role in preventing, detecting, and mitigating the symptoms of financial distress in municipalities, but only if it is aware of the symptoms.

Winter’s grip is finally over and the clear signs of spring are everywhere. One familiar sign of spring is the preparation of fields for planting. Pennsylvania’s agriculture industry is getting ready for another growing season. One important segment of agriculture here in Pennsylvania is the wine industry. Recently, the Center released an assessment report on the wine industry, noting that 81 percent of Pennsylvania wine is being sold directly from wineries or winery outlets. According to the Pennsylvania Winery Association, we have approximately 150 wineries that produce and sell wine throughout the state’s seven wine regions. Pennsylvania is also home to 11 wine trails that contribute $2 billion to the state’s economy.

Spring is also the time when the Center releases its annual Request for Proposals and accepts Letters of Intent for the next research grant award cycle. At its March meeting, the board approved targeted topics that it considers most timely and relevant to our rural communities including an analysis of: the fiscal status of rural volunteer fire companies, municipally owned rural roadways, the economic impacts of state and federal Heritage Areas, Pennsylvania’s health workforce, special education funding in rural and urban school districts, unearned income, self-employed workers, earned income tax revenues at the municipal level, non-profit fundraising in Pennsylvania, rural acute care hospitals, and the needs of our state’s older residents. The eligibility requirements and guidelines for submitting a Letter of Intent are on the Center’s website, listed below.

The Pennsylvania Rural-Urban Leadership (RULE), a longtime partner of the Center, is also starting a new season by recruiting class members for its upcoming leadership class. RULE is accepting applications for its two-year leadership development initiative. The program, which partners with Penn State University, focuses on developing proficiencies in communication skills, group process, personal leadership and specific community issues. The first year emphasizes local, regional and state public policy issues, and the second year focuses on national and international issues. If you think you, or someone you know, would be a good candidate for this leadership program, call (814) 863-4679 or visit www.rule.psu.edu.

With the new legislative session underway, the Center’s Board of Directors held its reorganization meeting. I want to thank the board members for their support in re-electing me as chairman. The Center is well-served by my fellow officers and board members, all of whom were reappointed by their respective organizations. We all remain committed to the fine work of the Center and ensuring that our products and services continue to inform public policy debate in Harrisburg and provide practical tools and resources to local officials and communities.

Here’s how the Center defined young families. First, it used the Census Bureau’s definition of “family” as follows: a family is comprised of two or more people who are related by birth, marriage, or adoption and who reside in the same housing unit.

Types of Young Families
There are two types of young families: married and non-married. Married families are comprised of a husband and wife and non-married families are made up of two or more related persons. Examples of this category include a single parent with children, an older relative living with a younger person, or siblings living together. In 2011, the Census Bureau did not classify same sex partners as a family.

Forty-four percent of young rural families rented their homes. On average, these families lived in a home with 2.7 bedrooms and paid a median monthly gross rent of $743.

Among young urban families, the majority rented their homes (53 percent). These families lived in a home that had an average of 2.4 bedrooms and paid a median monthly gross rent of $900. Forty-seven percent of young urban families were homeowners, most of whom (91 percent) had a mortgage payment. The median monthly payment for these families was $1,100. In 2011, the estimated median value of their homes was $170,000.

A Dollar a Dozen? Dollar-Type Retail Stores in Pennsylvania 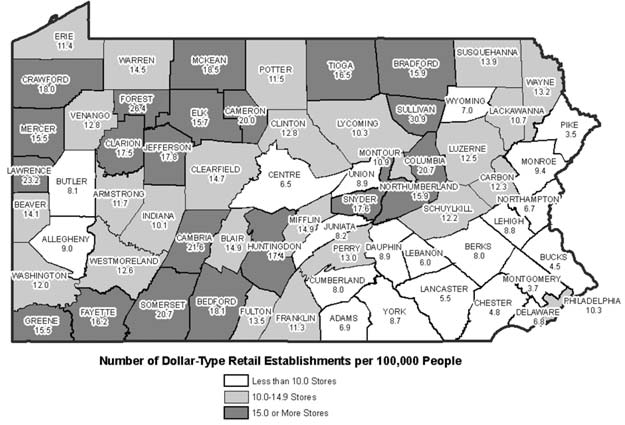 
After a few sluggish years, tourism expenditures in rural Pennsylvania are beginning to climb.

According to the most recent data from the Pennsylvania Department of Community and Economic Development, visitor spending increased 5 percent from 2010 to 2011, from $11.2 billion to $11.7 billion.

Statewide, from 2010 to 2011, tourism expenditures increased in the spending categories of transportation, food and beverage, recreation, shopping, and lodging.