The results of recent research sponsored by the Center for Rural Pennsylvania suggest there are a number of factors, such as health care worker job dissatisfaction and potential retirement, which could intensify these shortages in the future.

Research background
Dr. Brandon Vick, Margaret Gagel and Dr. David Yerger of Indiana University of Pennsylvania analyzed survey data on four health workforces in Pennsylvania, namely physicians, physician assistants, dentists, and dental hygienists, to identify any rural/urban differences in the workforce makeup, career satisfaction, and plans to leave patient care. The research was conducted in 2014 and the data for the analysis came from the 2012 and 2013 Pennsylvania Health Workforce Surveys, which are from the Pennsylvania Department of Health’s Bureau of Health Planning.

In rural areas, most physician assistants and dental hygienists are younger than 45 years old. The age distribution of these professionals is similar in urban areas.

Only 24 percent of all rural physicians are female, 39 percent of whom are age 40 and younger. However, a much larger percentage of younger urban physicians are female (47 percent), suggesting that there may be barriers or preferences that sway females from practicing in rural areas. While females make up a smaller percentage of dentists overall (21 percent), the results suggest stronger female representation among dentists beginning their careers (45 percent) in both rural and urban settings.

After controlling for other factors, the research indicated that rural physicians have 17 percent higher odds of reporting dissatisfaction, which is important given the strong links between career satisfaction and decisions to leave practice.

Rural physician assistants, dentists, and dental hygienists nearing retirement age also have higher odds of retiring in the next 6 years than their urban counterparts.

As the research could not determine why rural health care workers report dissatisfaction and plans to leave their professions, the researchers recommend future research to focus on a number of areas, including: qualitative studies to help uncover the reasons for higher rural dissatisfaction and plans to leave patient care, as well as reasons why female and younger physicians and dentists are underrepresented in rural areas; county-level studies to identify specific factors that drive rural/urban differences identified in this research; and studies into what fraction of the health care workforce is equipped to provide services for veteran and elderly patient populations and the potential barriers that may exist to meeting the growing demand from these populations.

For a copy of the research results, Assessing Career Dissatisfaction and Plans to Leave Patient Care Among the Rural Health Workforce, visit www.rural.palegislature.us or call (717) 787-9555.

Source: Researchers' calculations, Health Workforce Surveys, 2012, 2013. Pennsylvania population information from the Center for Rural Pennsylvania (2014). Note: Analysis of 26,544 physicians, 4,568 physician assistants, 5,187 dentists, and 5,570 dental hygienists. Health workforces consist of those in direct patient care at the time of the survey.

Sources of Professional Dissatisfaction Among Rural and Urban Physicians and Dentists

Source: Researchers’ calculations, Health Workforce Surveys, 2012, 2013. Note: Analysis of 26,544 physicians, and 5,187 dentists. “Other” category represents the respondents who chose “Other” as their primary source on the survey questionnaire.

A number of studies have called attention to the growing need for health care professionals, especially primary care physicians, in Pennsylvania in the near future.

For rural Pennsylvania, health care professional shortages are nothing new. In fact, research sponsored by the Center for Rural Pennsylvania and conducted by Mansfield University in the early 1990s documented Health Professional Shortage and Medically Underserved Areas in Pennsylvania. The federal Department of Health and Human Services officially approved these designations following the release of that research, and these designations helped rural areas get access to more health care professionals through loan forgiveness programs.

Over the years, however, rural areas still struggled with attracting and retaining health care professionals, and more recent research sponsored by the Center indicates that health care worker job dissatisfaction and potential retirement could intensify shortages in the future. The study, featured on Page 1, was conducted by researchers from Indiana University of Pennsylvania. It indicated that rural physicians and dentists who are nearing retirement age outnumber those who are early in their careers. The research also found that slightly more rural physicians than urban physicians are dissatisfied with their careers. This research supports other recently released studies that suggest policy and program changes that will increase the number of health care professionals, especially in rural areas.

Defining Municipal Pension Plans in Pennsylvania
The data used for the Snapshot are from the Pennsylvania Public Employee Retirement Commission. According to the commission, municipal pension plans may be categorized as defined benefit or money purchase (defined contribution) pension plans.

In defined benefit pension plans, the pension benefit to be payable at retirement is fixed in some manner and a resultant actuarial liability is established and funded.

Types of Municipal Pension Programs in Rural and Urban Municipalities, 2013 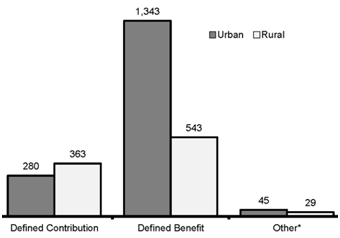 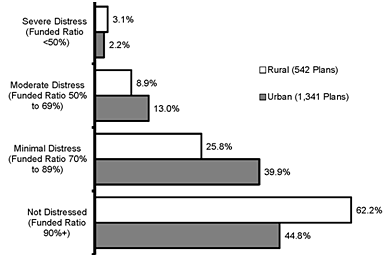 Assets and Liabilities of Defined Benefit Programs by Active Members, 2013 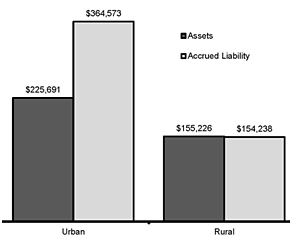 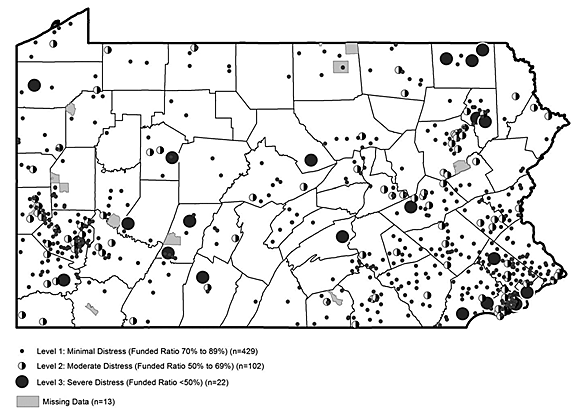 Note that the index provides an overall look at income distribution within a county and does not necessarily indicate areas of high and low income. 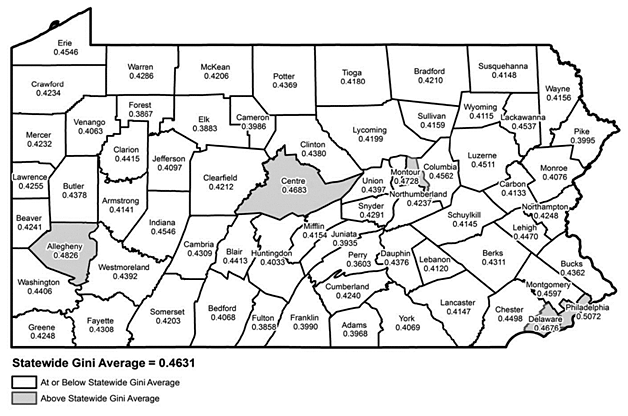 $180.6 billion is the 2013 value of all taxable real property in rural Pennsylvania ($52,366 per capita).  (Pennsylvania Tax Equalization Division)

$600.7 billion is the 2013 value of all taxable real property in urban Pennsylvania ($64,374 per capita). (Pennsylvania Tax Equalization Division)

Just the Facts: Look Twice, Save a Life

As the temperature rises, so do the number of motorcycles on Pennsylvania roadways.

Despite the larger increase in registrations, motorcycles are only slightly more prevalent in rural Pennsylvania than in urban Pennsylvania.

The three counties with the largest increase in motorcycle registrations from 2010 to 2014 were Clinton, Fulton and Forest, each with an increase of more than 10 percent.

Not every county had increases during this period. Twenty-nine counties saw a decline in registered motorcycles. The three counties with the largest declines were Somerset, Wyoming and Lackawanna, each with a decline of 3 percent.

Nationwide, the number of motorcycles is on the rise. According to 2008-2011 data from the U.S. Department of Transportation, there was a 9 percent increase in registered motorcycles.

A 2014 membership survey of the American Motorcycle Association indicated that, on average, its members were 48 years old and had a riding experience of 26 years. Ninety-five percent of their members were male and 5 percent were female. On average, their members had household incomes of $85,300.