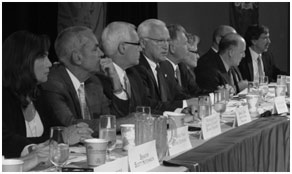 In 2014, the Center sponsored four public hearings on the heroin/opioid epidemic in Pennsylvania. This year, the Center is sponsoring three additional hearings to learn more about heroin/opioid addiction treatment methods and recovery services.

On June 15, the Center for Rural Pennsylvania’s Board of Directors approved three statewide public hearings to gather testimony on heroin and opioid addiction treatment and recovery services in Pennsylvania. The first two hearings were held July 21 at St. Vincent College in Latrobe and July 29 at the Commonwealth Medical College in Scranton. The third hearing is scheduled for August 18 at the Yorktowne Hotel in York.

Last summer, the Center sponsored four public hearings to examine the heroin epidemic in Pennsylvania. In September, the Center issued a report summarizing the testimony from the hearings and listing specific legislative recommendations and programming actions for consideration. By November, pending legislation that the report’s recommendations addressed was passed into law.

Through this current round of hearings, the Center expects to learn more about effective treatment methods and the critical support services available to individuals in recovery and their families.

More information on the hearings is available at http://www.rural.palegislature.us/publications_heroin_and_opioid_addiction_public_hearings.html#june18.

While Act 139 of 2014 allows all first responders, including law enforcement, to carry and administer this medication, the survey found that the majority of local police departments are not carrying naloxone.

The survey did find that 28 percent of departments planned to provide naloxone to their officers within the next 3 months.

The mail survey was sent to 1,008 municipal police chiefs, or officers in charge, in late May. By the end of June, 578 completed surveys were returned, for a response rate of 57.3 percent.

For a copy of the survey results, Pennsylvania Municipal Police Departments and Naloxone, visit www.rural.palegislature.us or call (717) 787-9555.

Earlier this summer, the Center worked with the Pennsylvania Department of Drug and Alcohol Programs, or DDAP, to conduct a study of local police departments and their use of naloxone, a medication used to reverse opioid overdose.

As you may recall, in November 2014, the legislature passed Act 139, known as David’s Law, to allow naloxone to be acquired and used by all first responders, including law enforcement, family and friends. Since the passage of that law, it was unclear how many police departments had acquired naloxone and received the free training on its use.

The results from the Center/DDAP survey, featured on Pages 1 and 3, indicate that there is a need for this life-saving medication to be available to all first responders as a majority of local police departments have responded to overdose calls within the past 12 months.

However, the survey also found that, as of late June, less than 20 percent of police departments were carrying the medication. Some of the reasons for not carrying naloxone were reliance on other first responders, such as EMS, cost concerns, difficulty in accessing training, and potential liability.

Also, there were funding initiatives put in place after the passage of Act 139 to supply local law enforcement with free training and naloxone. DDAP has more information on how to access naloxone supplies and training on its website (www.ddap.pa.gov).

In terms of liability, Act 139 protects all first responders against criminal and civil liability. Specifically, the law states that a person who, acting in good faith and with reasonable care, administers naloxone to another person who is suffering an opioid-related drug overdose is immune from criminal and civil prosecution.

Right now, the commonwealth is witnessing fatal opioid-related overdoses at rates never seen before. According to a report by the Pennsylvania State Coroners Association, in 2014, 2,489 individuals died from drug-related causes, which was a 20 percent increase from the number of such deaths in 2013. The association further reported that initial data from 2015 indicate that the number of deaths will continue to increase this year.

We know our local police departments take their duty to protect and serve seriously, and that they are often the first line of defense in our communities to all types of hazards. Including naloxone in their toolkit is another way that they can help our commonwealth combat this onslaught of fatal overdoses.

The United Way of Pennsylvania, established about 40 years ago, provides state-wide leadership to individual United Ways and partners with other community-centered, fundraising organizations to collect and distribute resources within Pennsylvania communities.

While United Ways are not the only organizations raising and distributing funds throughout their respective communities, they are often the most recognized. However, there is little public information available on their overall campaign success.

The research defined “campaign success” as a combination of two variables: the number of times a UW surpassed a previous year’s total, and the number of times a UW increased its campaign goal from the previous year. It used secondary data from the United Way of Pennsylvania and United Way Worldwide, and data from the 2010 Census to describe the characteristics of communities served by Pennsylvania UWs. These community characteristics included race, age, education, household income, and household owner occupancy rates.

The results offered a glimpse into what organizations like the United Way can achieve over the course of a decade; the last of which was hit by an economic crisis and unstable global economic and political conditions.

The research found that Pennsylvania UWs increased their goals more often over the10-year study period than decreased them, and surpassed their campaign totals of the previous year about five times over the 10-year period.

The research also found that Pennsylvania UWs that achieved campaign success were more likely to have service areas with more residents under age 65 and more executive directors in their history and tended to be among the top fundraisers among all UWs in any given year.

For a copy of the research, Measuring United Way Campaign Success, visit www.rural.palegislature.us or call (717) 787-9555. 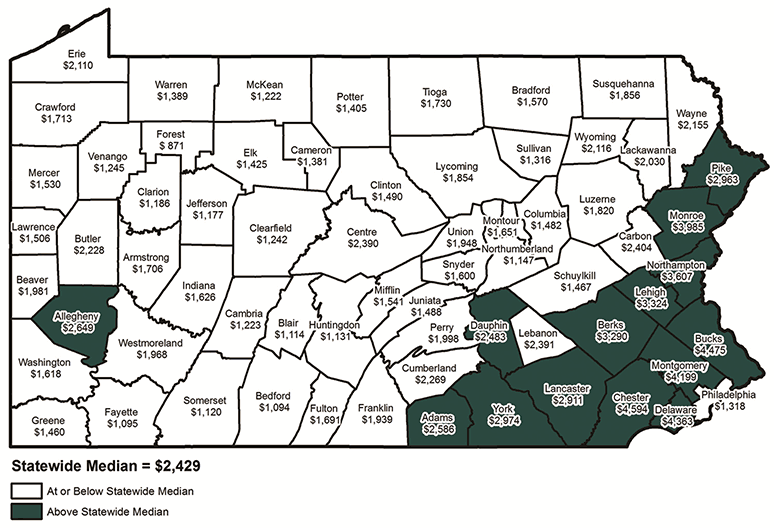 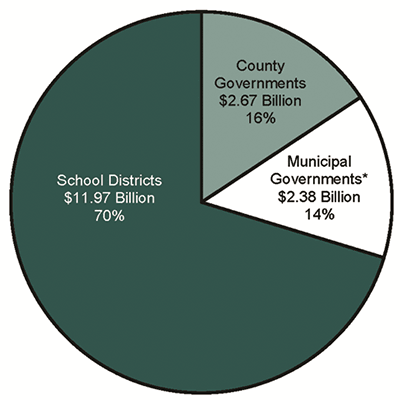 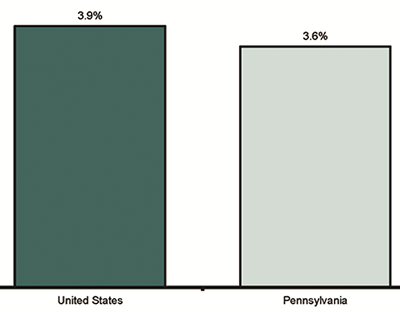 Profile of Rural and Urban Homeowners by Property Taxes Paid, 2013

Range of Property Taxes Paid by Rural and Urban Homeowners, 2013 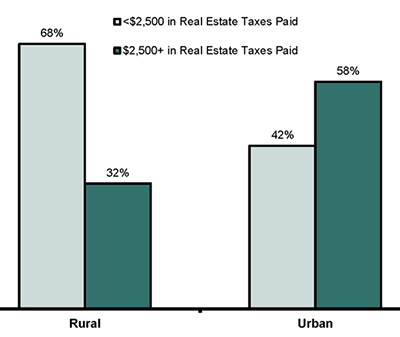 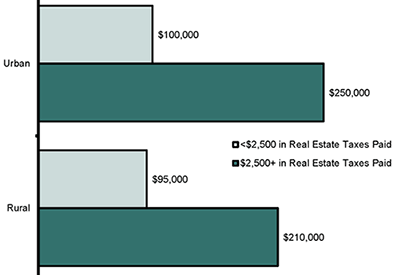 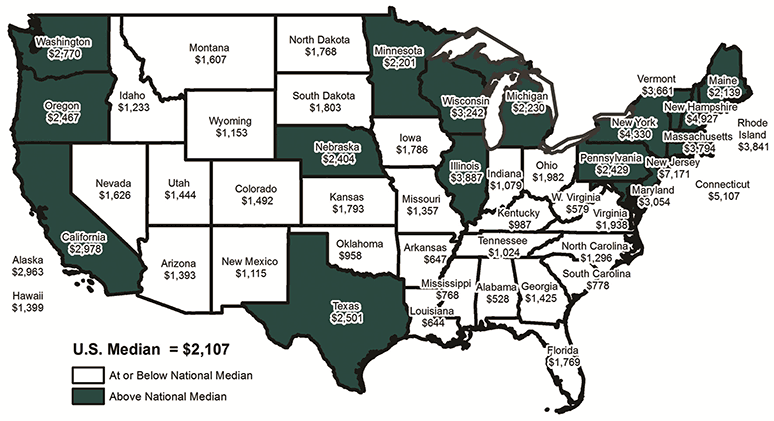 In 2008, a first-of-its-kind study for Pennsylvania projected $1.17 trillion in personal wealth to change hands among Pennsylvania generations over the next 10 to 50 years, with $193.38 billion changing hands by this year.

The study, called Wealth Transfer in Pennsylvania and sponsored by the Center for Rural Pennsylvania, was completed to provide estimates on the amount of personal wealth that is likely to be transferred from one generation to the next from 2005 to 2055.

This year, the Center has contracted with the Center for Rural Entrepreneurship, which completed the first study, to once again create scenarios for inter-generational wealth transfer for the state and its counties.

“The first study’s findings demonstrated the magnitude of assets present in every county of the commonwealth and the opportunities to invest a small portion of those assets toward community betterment projects,” said Senator Gene Yaw, board chairman. “It helped start conversations among philanthropic groups, community and economic development organizations, financial planners, agricultural interests, community residents and others about the wealth that is in their communities and how that wealth may be invested to benefit their communities.”

Since information for the first study was gathered before the last recession and before much of the Marcellus Shale drilling activity had started, and because data from the 2010 Census and the Center’s population projections are now available, the Center’s Board of Directors agreed that it was time for an update.

“Our hope is that the updated scenarios will kick-start those community conversations,” Yaw said, “and encourage people with a passion for their community to invest in its future.”

The study is scheduled to be completed later this year. For information on the 2008 study, visit www.rural.palegislature.us/publications_wealth_transfer.html. 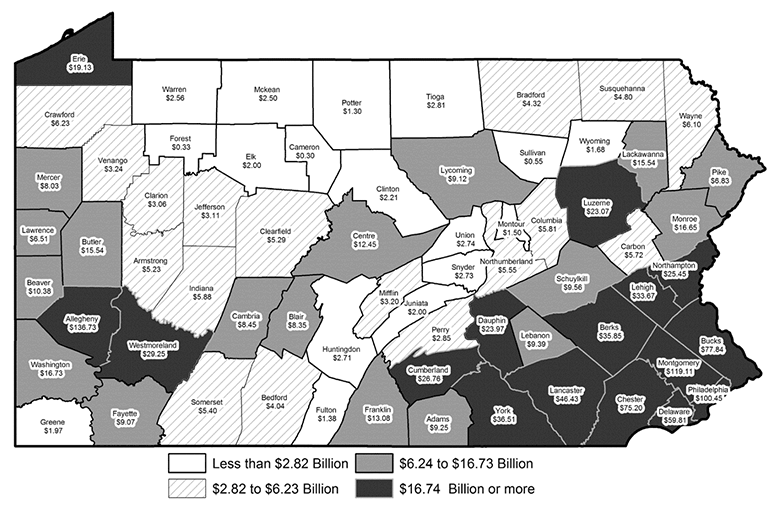 The 2008 transfer of wealth study projected $1.17 trillion in personal wealth to change hands from one generation of Pennsylvanians to the next over a 50-year period. The Center is updating the study this year because of several changes in the state, including new population forecasts, energy development, and recovery following the last recession.

Just the Facts: Home on Wheels

RV registration in Pennsylvania took a hit during the most recent recession. From the beginning of the recession in 2008 to 2014, the number of registered RVs in Pennsylvania declined 13 percent. During this period, the biggest decline (37 percent) was in the number of smaller RVs, which are those that weighed less than 5.5 tons. The number of larger RVs, which are those that weighed 5.5 tons or more, declined only 0.3 percent. In 2014, these larger RVs accounted for 74 percent of all registered RVs in Pennsylvania.

While comparable data on RV registration in other states were not readily available, data from the Recreation Vehicle Industry Association, a national trade group of RV manufacturers, indicate that registration may be growing. From 2008 to 2014, the number of wholesale shipments of RVs increased by 15,600, or 55 percent.

A 2011 study at the University of Michigan found that 8.5 percent of U.S. households owned an RV.  The median age of owners was 48 and 39 percent of owners had children living at home. The average household income among RV owners was $75,000. According to the study, owners had their RVs for about 6.4 years.