For many rural municipalities, the implementation of the UCC in 2004 resulted in the regulation of the design and construction of buildings for the very first time. Those municipalities that chose to “opt-in” to the UCC accepted enforcement responsibilities that included: reviewing and approving building plans and documents, issuing permits, conducting inspections, taking appropriate enforcement actions to achieve compliance when permit holders fail to comply, and issuing certificates of occupancy. Municipalities that chose to "opt-out" deferred those responsibilities to the state or third-party agencies.

To investigate the potential impacts of the UCC in rural Pennsylvania, researchers from Pennsylvania State University conducted a study in 2009, which assessed, to some extent, how well the UCC has met some of the goals outlined in Act 45. The research was sponsored by the Center for Rural Pennsylvania.

Survey of officials, agencies
Using a survey of municipal officials and third-party agencies, the researchers, Dr. Bohumil Kasal and Mike Turns, collected information regarding UCC enforcement methods and costs among opt-in municipalities. The survey also collected information on the prevalence of municipal amendments to the UCC, which was analyzed as one indicator of the actual degree of uniformity provided by the UCC. The research compared rural and urban municipalities regarding UCC enforcement methods, costs, and prevalence of amendments.

The researchers also analyzed two sources of building permit data and recent trends in the number of permits issued in rural counties.

Finally, they assessed the potential impact of the UCC on homeowners’ insurance premiums as a potential cost-mitigating factor.

According to the study, an overwhelming majority of rural municipalities rely on UCC-certified, third-party plan review and inspection agencies to meet their UCC enforcement responsibilities.

Board of appeals and fees
The UCC requires opt-in municipalities to have a board of appeals, to which permit applicants or holders can appeal UCC-related decisions made by the municipal code administration. Requests for variances are also heard by the board of appeals.

Code uniformity
A major goal of the UCC was to provide increased uniformity of code requirements across Pennsylvania. More than 20 percent of rural municipalities said they adopted an amendment to the UCC. Urban municipalities had a much higher prevalence of amendments at more than 50 percent. On average, urban counties had greater code requirement differences than rural counties.

Impact on insurance rates
To determine if the UCC has impacted insurance rates, the researchers contacted several insurance industry professionals to learn if insurance companies consider building codes when determining their rates. The researchers theorized that the UCC and its associated requirements would likely reduce homeowners’ insurance premiums below what they would be were there not a modern building code in place. This effect appeared to be relatively small.

Policy considerations
Based on the results, the researchers suggested several policy considerations including: the possibility of eliminating a municipality’s ability to opt-out of UCC enforcement; an evaluation of administrative fees, along with the overall UCC fee schedule, to determine if they are commensurate with the administrative services provided; the possibility of giving the Pennsylvania Department of Labor and Industry the authority to impose sanctions on municipalities who fail to comply with their responsibility to establish a board of appeals; and requiring all municipalities to declare all amendments they are enforcing, since there seemed to be confusion over what constituted an amendment, and how to legally adopt an amendment.

The proverbial expression, “A man’s home is his castle,” is often used to illustrate the principle of an individual’s right to privacy. But I also think this expression describes how important homeownership is to most people. It is part of the American Dream.

According to the most current U.S. Census Bureau data, 71 percent of all homes in Pennsylvania are owner occupied. In rural Pennsylvania, that percentage jumps to 75 percent.

A home is often the greatest asset a person has in terms of his or her personal possessions. This is true whether we build that dream home, or buy an existing one and begin to add our own personal touches to it.
In this issue of Rural Perspectives, homes and homeownership take center stage, with three articles focusing on home construction and how the recession is affecting the American Dream.

In 2009, faculty from Penn State University conducted a study to consider how well the Uniform Construction Code, or UCC, has met some of the goals outlined in its enabling legislation. The UCC was enacted to protect life, health and the environment with regard to the design and construction of buildings, including homes, in Pennsylvania. Since the 2004 implementation of the UCC, there had been little documentation of the mix of enforcement approaches chosen by municipalities, or the fees charged for enforcement services, particularly from an urban and rural perspective. Our feature article summarizes the results of that research.

We all have heard about one of the tragic results arising from the current recession and that is the foreclosure on homes. Pennsylvania is fortunate to have in place, since 1983, the Homeowner’s Emergency Assistance Program, created by the passage of Act 91. The program is administered by the Pennsylvania Housing Finance Agency and provides emergency mortgage assistance to eligible homeowners in danger of foreclosure. An in-house analysis of data collected by the Pennsylvania Housing Finance Agency offers a look at the number of Act 91 notices received by rural and urban homeowners and a comparison of quarterly results from 2009 and 2010. A map detailing some of the findings is shown below.

Center staff also looked at the number of new residential building permits issued in Pennsylvania over the period of 2007 through 2009. Both rural and urban counties in the commonwealth experienced a 46 percent decline over that period. This compares to a 58 percent decline nationwide, with Nevada, Georgia, and Illinois experiencing the largest declines.

While the news may not be good in terms of how this recession has affected home construction and homeownership, the dream of owning a home remains strong. As the nation continues its efforts to grow and expand the economy, this one measurement of our success will continue to be an important part of the Center’s data collection and analysis.

Board Thanks Dr. Robert Pack for Decade of Service, Welcomes Dr. Livingston Alexander 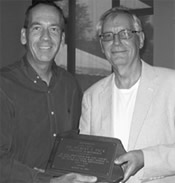 At its August 2010 meeting, the Center for Rural Pennsylvania’s Board of Directors thanked Dr. Robert F. Pack for his decade-long service to the board. He was appointed to the Center's board in March 2000 to represent the University of Pittsburgh. He served until August 2010.

At the university, he serves as Vice Provost for Academic Planning and Resources Management. He will retire from the university at the end of 2010.

On behalf of the Center's board, Senator John Gordner, board chairman, presented Dr. Pack with a plaque to honor his exemplary service and dedication to the board and to rural Pennsylvania.

In September, the Center welcomed Dr. Livingston Alexander of the University of Pittsburgh.

Dr. Alexander is president of the University of Pittsburgh-Bradford. He joined the university in 2003. Early in his tenure, he implemented a campus-wide strategic planning effort that resulted in a new vision for the university. Among the major accomplishments resulting from his planning efforts were the development of new academic majors, a successful completion of a $13 million capital campaign, the construction of one academic building and two residence halls, the development and implementation of an integrated marketing plan and significant increases in enrollment. 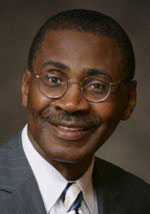 Dr. Alexander is a graduate of the University of Houston (Texas).

Data from the U.S. Census Bureau show home construction has declined statewide during this current recession.

From 2007 to 2009, the number of new residential building permits issued declined about 46 percent in both rural and urban Pennsylvania counties.

Nationwide there was a 58 percent decline in building permits. Nevada, Georgia, and Illinois had the largest decline, each with more than 70 percent.

Nationally, more than 1.6 million construction jobs, or 22 percent, were lost.

Among urban counties, there were 12,594 permits issued, or one for every 730 residents. Urban counties had an estimated total of nearly 3.9 million housing units.

Nationally, in 2009, there were more than 582,900 permits issued, or one permit for every 527 residents.  The Census Bureau estimated there were 129.9 million housing units in the United States.

Nationally, the average construction costs for a new residential unit were $163,700, a 2 percent decline from 2007.

While 2009 was a challenging year for Pennsylvania’s housing industry, the data indicate that the first half of 2010 showed signs of improvement. During the first six months of 2010, 9,721 permits for residential units were authorized in Pennsylvania. That was a 27 percent increase from the same period in 2009.  Nationally, the number of authorized permits for residential units increased 14 percent.

Researchers at Pennsylvania State University have completed the third wave of a longitudinal study that is examining the educational and career aspirations and future residential plans of rural Pennsylvania school students.

The study, sponsored by the Center for Rural Pennsylvania, is also examining the factors influencing the students’ aspirations, whether their plans change as they age, and if they attain their goals. In its entirety, the study is designed to include four waves of data, collected about every other year, beginning in 2004 and continuing through 2011.

Below is a sample of the findings from the youth who participated in Waves 1 through 3.

Younger group results
The majority of the younger group youth want to go to college for four or more years and enter professional or managerial occupations. These aspirations have remained consistent across Waves 1, 2 and 3.

Older group results
A majority of the older group is enrolled in post-secondary school 3 years past high school graduation. About 56 percent of these young adults combine school and work.

Overall, the results indicate that, even though the older youth are out of high school, they continue to make slight changes in their educational, occupational and residential aspirations.

Final wave underway
The researchers are currently working on the fourth and final wave of the longitudinal study. After all waves are completed, they will develop an overall analysis of the factors that are shaping the educational, occupational and residential aspirations of Pennsylvania's rural youth and offer policy considerations that may help rural youth achieve their goals.

In May 2010, the federal Home Affordable Modification Program estimated there were 1.6 million delinquent home mortgage borrowers across the United States.

What is Act 91?
Act 91 was enacted in 1983 and established the Homeowner’s Emergency Assistance Program (HEMAP). HEMAP, which is administered by PHFA, provides emergency mortgage assistance to help homeowners who are in danger of losing their homes to foreclosure.

Homeowners eligible for the program must be experiencing financial hardship due to circumstances beyond their control, be at least 60 days delinquent on their mortgage, and be facing foreclosure actions by their lender.

The Act 91 data collected by PHFA represent homeowners who have received an “Act 91 Notice,” informing them of their right to apply for HEMAP assistance.

The data do not represent foreclosed homes.

At the county level, homeowners in Allegheny and Philadelphia counties received the highest number of Act 91 notices (6,457 and 13,163, respectively).

Homeowners in Cameron and Forest counties received the least number of notifications, each with 13.

Counties with the largest declines were Forest, Monroe and Pike, each with a decline of more than 43 percent.

However, there were a few counties that experienced an increase in Act 91 notices. Luzerne, Chester and Jefferson counties each had an increase of more than 5 percent.

The number of dentists in rural Pennsylvania is increasing.

According to survey data from the Pennsylvania Department of Health, from 2007 to 2009, there was a 6 percent increase in the number of general practice dentists in rural counties. In 2007, there were 997 dentists who spent the majority of their practice time in one of Pennsylvania’s 48 rural counties. In 2009, there were 1,059 dentists, or one dentist for every 3,240 rural residents.

Still, the results of the 2009 survey data show a generally positive future for rural dentistry. Fifty-seven percent of rural dentists in the survey said they anticipated the continuation of their practice for 11 or more years. In addition, 68 percent said they were accepting new patients who were uninsured.

States with the largest increases were Arizona, Idaho, Nevada, and Utah, each with an increase of more than 29 percent.