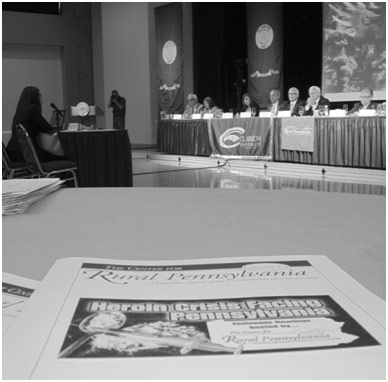 On August 19, the Center for Rural Pennsylvania held the last in a series of four public hearings on heroin and opioid abuse in Pennsylvania. The hearing was held at Clarion University of Pennsylvania. Earlier hearings were held in Williamsport, Reading and Loretto. Representatives from state and local law enforcement organizations, health care organizations and treatment facilities, school districts and universities, local and state government agencies, businesses and the public presented testimony to the Center's Board of Directors and local legislators.

In September, the Center will provide the General Assembly with a summary of the hearings and suggestions for legislative policies that may help to curb the use of these dangerous narcotics.

More information on the hearings is available below in the Chairman's Message and at http://www.rural.palegislature.us/publications_heroin_and_opioid_addiction_public_hearings.html.

It's no secret that Marcellus Shale development in Pennsylvania has created significant discussion about the potential implications for the commonwealth's communities and natural environment. In 2012, a team of researchers from Penn State University began to chronicle community changes in four counties to learn more about the social and economic impacts of Marcellus Shale development in Pennsylvania. The study, sponsored by the Center for Rural Pennsylvania, is documenting strategies used by institutions, organizations, and communities to manage economic and social impacts of gas development.

The first phase of the study, conducted in 2012 and 2013, focused on aggregate change in the four study counties of Bradford and Lycoming, in the northern tier, and Greene and Washington, in the southwest. It examined county-level indicators including population, housing, local economies, crime, health and healthcare access, K-12 education, agriculture and local government. It also examined the experiences of youth and low-income residents in communities with shale-based development.

The results from this phase of the study are available in nine topical reports, which are described below.

For a copy of the research report, The Marcellus Shale Impacts Study: Chronicling Social and Economic Change in North Central and Southwest Pennsylvania, and the nine topical reports, visit www.rural.palegislature.us.

We can't arrest our way out of this problem. This was a recurring theme at each of the four public hearings on the heroin epidemic that the Center for Rural Pennsylvania conducted in July and August. Law enforcement personnel at every level, from local police chiefs and sheriffs to county district attorneys to Pennsylvania Attorney General Kathleen Kane, told Center board members and legislators about their efforts to combat the availability of heroin in our rural and urban communities by attacking the supply chain. They told us how that chain has spread from our metropolitan areas throughout the commonwealth, overrunning our towns with a narcotic that has become more pure, more potent and more addictive over the past two decades. These law enforcement officials are using everything at their disposal to break that chain, but they know that it will take more than just arrests to put an end to this heroin epidemic.

Many of the judges who testified at the hearings echoed this theme. While they talked about the need to hand down stiffer penalties to dealers, they also talked about the need for more treatment courts and alternative sentencing options for heroin and other opioid addicts, particularly those who are low-level offenders, to get the help they need and possibly avoid incarceration.

Health care professionals, treatment professionals and parents described the effects of heroin and opioid addiction, and the heavy toll it takes on individuals, families, communities and our commonwealth. They talked about the disease of addiction and the need to treat it properly, just like any other disease. They talked about the life saving results of the drug naloxone, which counters the effects of a heroin or opioid overdose, and the need to make it available to more first responders, parents included.

And they talked about the proactive steps that everyone must take to combat this epidemic, namely through education and prevention. Starting with our middle-school-age youth and working our way on up to teens, adults and seniors, we need to present a clear message about the dangers of drugs, all drugs, including prescribed narcotics. Some testifiers identified prescription medications as gateway drugs to heroin, and said that we need to help everyone understand the dangers of sharing these medications and not using them as prescribed.

These are just some of the themes that emerged from the more than 15 hours of testimony from the more than 50 presenters who shared compelling statistics, information and stories. Thank you to each of them for taking the time to meet with us and help us to get some solid ideas on how we can address this public health crisis. In September, the Center will summarize information from the hearings and present its report to the legislature. Overall, when it comes to combating this issue, I think David Ellis, regional director with the Attorney General's Bureau of Narcotics Investigation, said it best: "We are only limited by our creativity."

The Center for Rural Pennsylvania contracted with Pennsylvania State University researchers in 2004 to begin a longitudinal study of rural Pennsylvania school students to understand their educational, career and residential goals and the factors influencing these goals.

This installment of Rural Snapshot looks at the students who were in 11th grade during Wave 3 and their employment status. It compared those who were employed and not employed with other school- and non-school-related variables. For the analysis, an 11th grader was considered to be employed if he/she usually worked 5 or more hours a week.

Researchers who want access to the data for further analysis should call or email Jonathan Johnson at (717) 787-9555 or johnsonj@rural.palegislature.us.

Percent of 11th Graders Who Were Employed, Wave 3
(worked 5 or more hours per week)

Note: Totals do not add up to 100 percent due to some students having more than one job.

Newly released data from the Pennsylvania Department of Conservation and Natural Resources (DCNR) confirms what many have suspected; Pennsylvania has loads of local parks.

According to the data, there are 5,618 local parks (county and municipal) in Pennsylvania. These local parks encompass 171,408 acres, or nearly 1 percent of the state's total land area. The data do not contain information on park amenities or use.