The number of fatal heroin overdoses has been steadily increasing in Pennsylvania.

A 2014 report from the Pennsylvania State Coroners Association indicated that 2,489 individuals died from drug-related causes in 2014, a 20 percent increase from 2013. The association also reported that initial data from 2015 indicate the number of deaths will continue to increase. Other states across the nation are reporting an increase in heroin use, as well, as addicts are shifting from more costly prescription opioids to cheaper alternatives.

“The heroin crisis has reached epidemic proportions, and has taken center stage on the local, state and national levels,” said Sen. Gene Yaw, Center for Rural Pennsylvania board chairman, at the last of three public hearings on heroin and opioid addiction treatment and services sponsored by the Center this past summer. “The Center has taken a leadership role to educate policymakers, inform the public, and enhance current policies in Pennsylvania related to heroin and opioid addiction treatment.”

Over the past two summers, the Center conducted seven public hearings and received more than 30 hours of verbal testimony and 350 pages of written testimony from 90 presenters.

“Our efforts are aimed at finding ways to better administer prevention, recovery and treatment options and learn more about what law enforcement can do,” said Sen. John Wozniak, Center board vice chairman.

Dr. Nancy Falvo of Clarion University and Center board secretary said, “Through these hearings, we are increasing awareness of this complex issue and how it affects individuals living with the disease of addiction, their families and their communities. As a nurse and an educator, I am thrilled that the Center’s hearings, held in both rural and urban communities of Pennsylvania, are helping to provide a clearer picture of this public health crisis.”

This fall, the Center will provide the General Assembly with a summary of the hearings and suggestions for legislative policies that address treatment and recovery services.

For more information on the hearings, visit http://www.rural.palegislature.us/publications_heroin_and_opioid_addiction_public_hearings.html#082015. Copies of the testimony submitted by presenters are available at Sen. Yaw’s website at www.senatorgeneyaw.com/heroin-combating-this-growing-epidemic-in-rural-pennsylvania/. 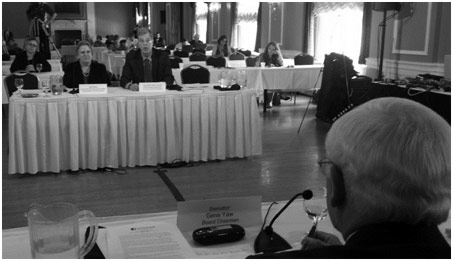 Deb Beck, president, Drug and Alcohol Service Providers Organization of Pennsylvania, and Secretary Gary Tennis,
Pennsylvania Department of Drug and Alcohol Programs, present testimony to the Center for Rural Pennsylvania Board of Directors
and area legislators at the York public hearing on heroin addiction treatment and recovery services. 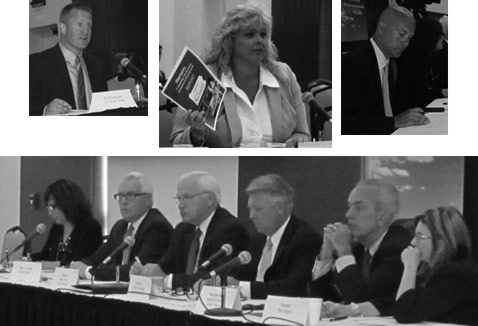 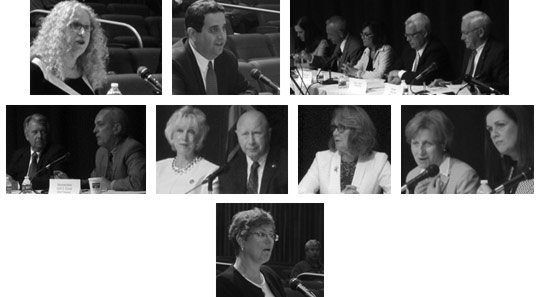 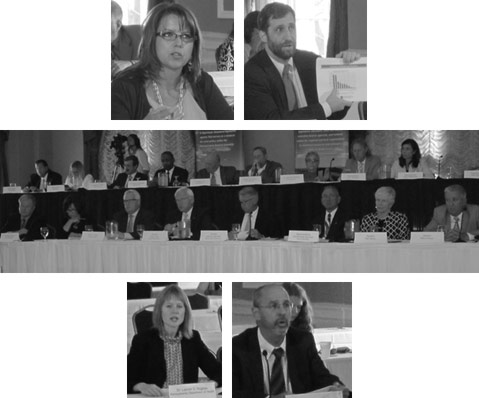 In this latest round of public hearings on heroin and opioid addiction sponsored by the Center for Rural Pennsylvania, I was struck by the powerful testimony of Delaware County District Attorney Jack Whelan, who presented at the York hearing.  I want to share some of his comments with you.

DA Whelan discussed his county’s response to the alarming number of heroin-related deaths that started as far back as 2007. The county formed a Heroin Task Force in 2012, started a school-based program called “Realities of Prescription Drugs and Heroin Abuse,” and also formed a Narcotics Overdose and Prevention and Education Task Force to provide additional outreach to schools.

DA Whelan then noted his county’s overwhelming support for Act 139 of 2014, known as David’s Law, which permitted all first responders, including law enforcement, to carry Naloxone, a medication used to reverse opioid overdose. He said that when the law went into effect on November 29, 2014, Delaware County was ready to put the 900 doses of nasal Naloxone into the hands of its police officers, and put two doses in every Delaware County police vehicle.

Almost immediately, Ridley Township Patrolman Shawn McGee, who also testified at the York hearing, became the first law enforcement officer €“ possibly in the state €“ to administer Naloxone under David’s Law. DA Whelan followed that up by saying Delaware County has made 81 saves with Naloxone since the law went into effect. He also said that, because of the limited immunity David’s Law provides to those who report a drug overdose to authorities, he believes this “Good Samaritan” portion of the law will also save lives.

As you may recall, the Center worked with the Pennsylvania Department of Drug and Alcohol Programs on a study of local police departments and their use of naloxone earlier this summer. The survey found there was a need for this life-saving medication to be available to all first responders as a majority of local police departments said they responded to overdose calls within the past 12 months. The Center also issued a report summarizing the testimony from the first four public hearings on heroin/opioid addiction last summer, which noted the support for David’s Law, and the need for more work in terms of treatment, education, prevention and law enforcement.

Once again, the Center will be summarizing the testimony from this last round of hearings and publishing a report this fall. As DA Whelan said, legislation will not solve all of the issues surrounding the heroin/opioid crisis, but continued focus on education and prevention programs and mental health and substance abuse treatment will go a long way to combating this public health crisis.

About this Snapshot
This snapshot focuses on first-time homebuyers. It used data from the Federal Housing Finance Agency (FHFA), Enterprise Public Use Database, Single-Family Properties, Census Tract File. FHFA collects information on the number of mortgages acquired each year by Fannie Mae and Freddie Mac. The data include the borrower’s age, gender, race and income and the amount borrowed or Unpaid Principal Balance. The data also indicate the purpose of the mortgage (home purchases, refinancing, or investment) and whether the borrower is a first-time buyer, which FHFA defines as a homebuyer who intends to live in the purchased home and who has not owned a home in the past 3 years.

For the fact sheet, First-Time Homebuyers in Rural and Urban Pennsylvania, visit http://www.rural.palegislature.us/publications_fact_sheets.html. 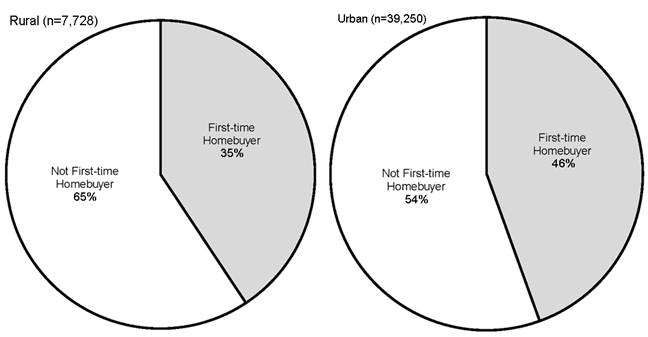 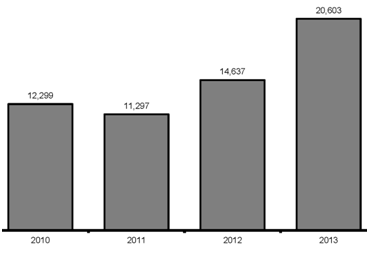 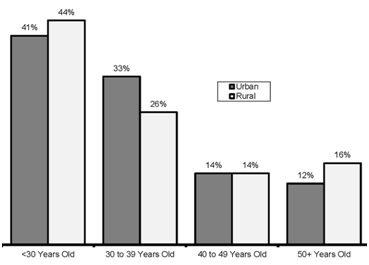 *Percentages only include the age of the first person listed on the mortgage. 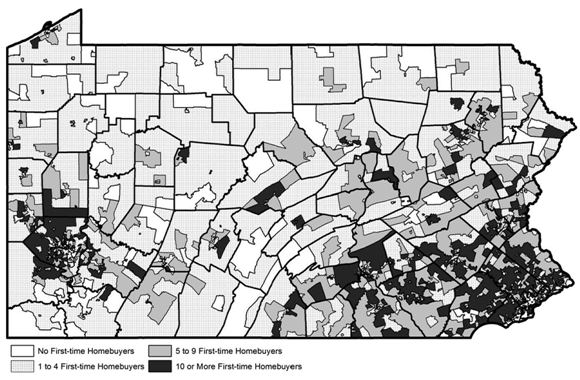 FHFA records the amount of money borrowed to purchase the home. Called the €œacquisition of Unpaid Principal Balance€ (UPB),
this amount is not the same as the selling price of the home since it excludes any down payments and closing costs.

Research examining special education enrollments, expenditures and revenues in rural and urban Pennsylvania school districts and charter schools over the 10-year period of 2002-03 to 2012-13 found that state subsidies and federal funding for special education each increased approximately $140 million over the study period while local funding rose by $1.3 billion.

The research, conducted by Dr. William Hartman of Penn State University and sponsored by the Center for Rural Pennsylvania, indicated that the state share of funding dropped from 42 percent to 27 percent over the study period. The federal share rose slightly from 3 percent to 5 percent, and the local share increased from 56 percent to 68 percent of total special education revenues. What was essentially an equal state/local partnership in 2002-03 changed to where the state is a minor partner and local districts have become major partners. The direct fiscal impact has been a shift of funding of more than $500 million from prior levels of state support to local districts.

Expenditures for special education students are largely driven by instructional programming specified in each student’s Individual Educational Plan. Consequently, changes in state policy to increase funding levels through state subsidies are the most likely avenue to reduce the current local burden.

Therefore, a policy consideration would be to maintain the state share of funding for special education and preferably increase the state share over time. However, implementation of this consideration is constricted by the state’s fiscal situation. On the other hand, continuing the current approach, with decreased state participation and little increase from federal sources, will result in even greater fiscal burdens on school districts.

For a copy of the research results, Analysis of Special Education Enrollments and Funding in Pennsylvania Rural and Urban School Districts, visit http://www.rural.palegislature.us/publications_reports.html.

Data from the Pennsylvania Department of Environmental Protection (DEP) indicate that, in 2013, rural residents and businesses recycled 1.08 million tons of plastic bottles, newspapers, aluminum cans and other recyclable items. Per capita, that’s about 628 pounds of recycled items per person.

The three counties with the highest number of pounds recycled per capita were Beaver, Chester, and Schuylkill, each with more than 2,000 pounds per person.

Greene and McKean counties had the lowest number of pounds recycled, with less than 50 pounds per person. No data were reported for Forest County.

Pounds per Capita of Recycled Items in Pennsylvania, 2013

Items include both residential and commercial. Data source: Pennsylvania Department of Environmental Protection.