PSP covered, on a full- or part-time basis, an average of about 3.4 million Pennsylvanians per year.

In 75 percent of the cases where PSP provided patrol coverage to a municipality, the coverage was full-time.

Research results
Looking at the specific types of incidents to which PSP responded in these municipalities, the research found the profile to be consistent with routine municipal patrol activities. The top 10 incidents to which PSP responded in both rural and urban municipalities included requests for assistance, collisions, burglaries, thefts, assaults, criminal mischief, and other, such as 911 hang-ups and disturbance incidents. PSP appears to be fulfilling a fairly traditional municipal policing role in municipalities where it has patrol responsibilities.

Looking at the workload level that municipal patrol responsibilities place on PSP, the study found that 72 percent of all PSP calls for service occurred in municipalities where PSP has some official (full- or part-time) level of patrol responsibility. Rural municipalities that rely on PSP for full-time coverage accounted for the largest proportion of PSP incident response at 46 percent. However, urban municipalities that have their own local police departments accounted for the second largest proportion of incident responses at 23 percent.

Municipalities do not provide any direct compensation to the commonwealth in exchange for PSP patrol or other services. Fines written by troopers patrolling municipalities can be seen as an indirect source of reimbursement.

An additional $14.7 million was written in non-traffic fines (non-Title 75 offenses), with 85 percent being written in municipalities where PSP has official patrol responsibility. All of this fine revenue remained with the commonwealth.

It should be noted that this study, conducted in 2011, was completed before the enactment of Act 124 of 2012, which amended Title 42 Section 3571(b). The act provides that fines and forfeitures for vehicle offenses prosecuted as a result of PSP action shall only be distributed to municipalities that have populations under 3,000 or provide at least 40 hours per week of local police service through a municipal police department or regional police department or contract for police services with another municipality or regional department. Revenues not payable to municipalities are to be transferred to PSP for cadet classes.

Recruitment and Retention of Pennsylvania Firefighters

When that fire whistle blows, most communities rely on trained firefighters, usually volunteers, to answer that call for help. When times are quiet, however, community members may not realize that their firefighters are still working hard, completing long hours of training, and in most cases, participating in a variety of recruiting and fundraising activities.

In 2001, the Center for Rural Pennsylvania and the Pennsylvania Fire and Emergency Services Institute conducted a statewide survey of fire chiefs to better understand the wide range of issues, including recruitment and retention and training and fundraising, that state fire companies faced.

In 2012, the Center and the Emergency Services Institute completed a follow-up survey to find out how fire companies were doing and to track any changes that may have occurred over the past 11 years.

The top firefighter recruitment methods used by fire companies in both 2012 and 2001 were word of mouth, and family and friends.

Firefighters cited the same main reasons for leaving service in 2012 and 2001. The reasons included moving, job commitments, family commitments, and/or loss of interest in firefighting.

The 2012 results found that fire companies, on average, had 17 fundraising events and responded to 551 fire calls per year.

For a copy of the results, Pennsylvania Firefighters: Recruitment and Retention, 2001 and 2012, call or email the Center at (717) 787-9555 or info@rural.palegislature.us or visit www.ruralpalegislature.us/publications_fact_sheets.html. 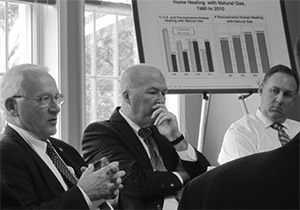 On October 4, the Center for Rural Pennsylvania, in collaboration with the Pennsylvania Public Utility Commission and the Pennsylvania Chamber of Business and Industry, hosted a meeting on natural gas extension services. The meeting was a follow-up to the public hearing the Center hosted back in April, which focused on the pros, cons and solutions to providing natural gas service to Pennsylvanians who are currently unable to use this abundant resource.

The October meeting was well attended by representatives of local and state government agencies and organizations, and the natural gas distribution industry.

The meeting attendees shared information about the statewide availability of natural gas for residential and commercial uses, how other states regulate gas line extension services, and the availability of state and federal loan and financing programs for consumers. They also discussed ideas and possible solutions on how to make natural gas available to more residents, businesses and institutions statewide.

Over the next few months, the attendees will be sharing information that was discussed at the meeting and will set a date to reconvene to keep moving forward on bringing natural gas services to more Pennsylvania consumers.

On behalf of the board and staff, I thank the attendees for their interest and look forward to continuing the discussion and taking any necessary action. And as we move forward, we’ll be sure to keep you up-to-date on our progress.

Also on behalf of the board and staff, I wish you a happy holiday season.

Employment
The majority of new rural and urban moms were employed (58 percent and 61 percent, respectively). One difference between these two groups was the number that was employed but temporarily absent from work due to factors such as illness or parental leave. Among employed rural new moms, 23 percent were employed but temporarily absent from work.  Thirteen percent of urban new moms were in this category.

The overall poverty rate for rural new moms was 28 percent and for urban new moms, 20 percent.

On October 1, the Center for Rural Pennsylvania was recognized by the Pennsylvania General Assembly for 25 years of service to the legislature and the residents of Pennsylvania.

Senator Yaw commended the Center for its commitment to improving conditions throughout the state for both rural and urban communities.


In September 2012, the U.S. Census Bureau released data from the 2010 Census that helped identify urbanized areas in Pennsylvania. With this data, the Center for Rural Pennsylvania can now identify rural and urban Pennsylvania municipalities.

Just the Facts: Tattoo You


Are you thinking about getting a tattoo? If so, you’ll have plenty of places to choose from in rural Pennsylvania.

In urban Pennsylvania, there are 370 tattooing establishments, or 4.0 for every 100,000 residents.

According to the L&I data, eight counties have no tattooing establishments.

While there is no known data on how many rural Pennsylvanians have a tattoo, a 2010 survey by the Pew Research Center found that 23 percent of all Americans who are 18 years old and older have a tattoo.

The survey also found that adult men and women are equally likely to have tattoos, and that young adults are more likely to have a tattoo than older adults.

If you’re under 18 years old, however, you should know that you need the approval of a parent or guardian to get that ink.

According to the National Conference of State Legislatures (NCSL), Pennsylvania is one of 31 states that prohibit minors from getting a tattoo without parental consent.