The research also found that unearned income became a larger percentage of personal income in rural Pennsylvania from 2002 to 2012 €“ not because rural county residents received more government transfer payments than urban counties, but because rural net earnings have lagged behind urban earnings.

Todd Behr, Dr. Constantinos Christofides, and Dr. Pattabiraman Neelakantan of East Stroudsburg University of Pennsylvania conducted the research, which was sponsored by the Center for Rural Pennsylvania. 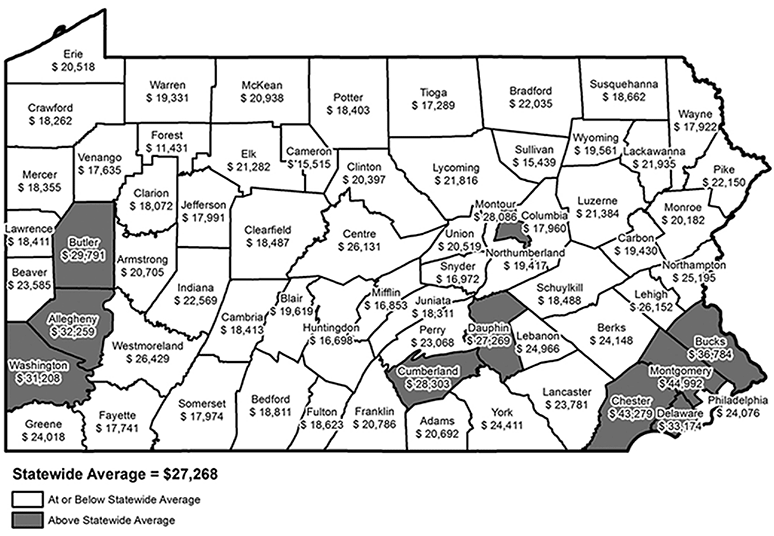 They used the Social Security Administration Handbook to define unearned and earned income as follows:

Unearned income is all income not earned, including: in-kind support and maintenance (food or shelter) given to an individual or received by an individual; private pensions and annuities; periodic public payments such as Social Security benefits, Railroad Retirement benefits, Department of Veterans Affairs pension and compensation payments, civil service annuities, workers' compensation, unemployment compensation, and payments based on need involving federal funds; life insurance proceeds and other death benefits; gifts and inheritances; support and alimony payments; prizes and awards; dividends and interest; rents and royalties (except those royalties defined as earned income); and certain payments not considered wages for Social Security purposes such as in-kind payments to certain agricultural workers, tips under $20 per month, and jury fees.

Earned income includes: wages paid for services performed by employees; military pay; net earnings from self-employment; payments for participating in workshops; sickness or temporary disability payments; and certain royalties and honorariums (such as royalty payments to an individual in connection with any publication of the work of the individual or if an individual receives a royalty as part of his/her trade or business).

While rural counties received lower levels of transfer payments, they became increasingly dependent on these same payments. This was due to slower growth of earned income in rural counties.

In general, the research found that, over the 40-year period of 1972 to 2012, rural counties in Pennsylvania had lower levels of per capita earned income and lower unearned income per capita than urban counties.

Research available
For a copy of the research, Analysis of Unearned Income in Rural and Urban Pennsylvania, visit www.rural.palegislature.us.

Packing up the moving van and driving it out of your hometown, or even your home state, is a common experience for many people. As a father of two grown children, I’m very familiar with the moving process and all of the happiness and headaches that usually come along for the ride. During the most recent drive to help my youngest move to her new home, I was reminded of the population projections released by the Center for Rural Pennsylvania in March 2014, especially the information about in- and out-migration.

For a more recent look at the migration patterns of our rural residents, turn to the Rural Snapshot on Pages 4 and 5. The information in this installment shows that our rural residents, for the most part, aren’t crossing the Mississippi River to get to or move from rural Pennsylvania, but are keeping close to the East Coast. It also shows that much of rural Pennsylvania has been experiencing positive net migration.

It will be interesting to see how these tables and graphs shift and change over the coming years. And you can be sure that the Center will share those changes with you.

As we look forward to 2016, the Center will continue to track the trends, conditions and opportunities for our rural communities and our commonwealth, as a whole, and provide you with timely research and data. And as always, I encourage you to contact the Center with any data needs or research ideas.

On behalf of the board and staff, I wish you a happy holiday season and safe traveling. 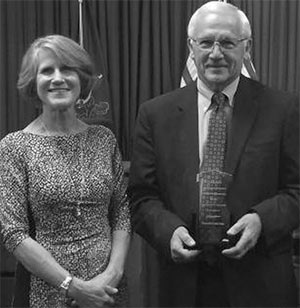 Congratulations to Sen. Gene Yaw, Center board chairman, on receiving the 2015 Legislator of the Year Award from the Pennsylvania Office of Rural Health (PORH). In late October, Lisa Davis, PORH director, presented the award to Sen. Yaw to recognize the substantial contribution he has made to rural health in Pennsylvania in his role as the Center chairman, and especially his role in helping to organize and host a series of public hearings in 2014 and 2015 on the heroin epidemic facing Pennsylvania.

“I was shocked and very surprised, as it was something I never expected,” Yaw said. “When we started the heroin hearings a year ago, the goal was to raise the awareness of the heroin problem in rural Pennsylvania. As a result of those hearings, the Center for Rural Pennsylvania has completed the most definitive report on the heroin problem in the state. The fact that the work of the Center has led to this award is very rewarding to me.”

Rural Snapshot €“ Rural Residents on the Move: In- and Out-Migration

(Note: All data are from the 2009-13 American Community Survey, U.S. Census Bureau unless otherwise cited.)

Estimated Net Domestic and International In-Migration to Rural Pennsylvania, 1990-91 to 2013-14 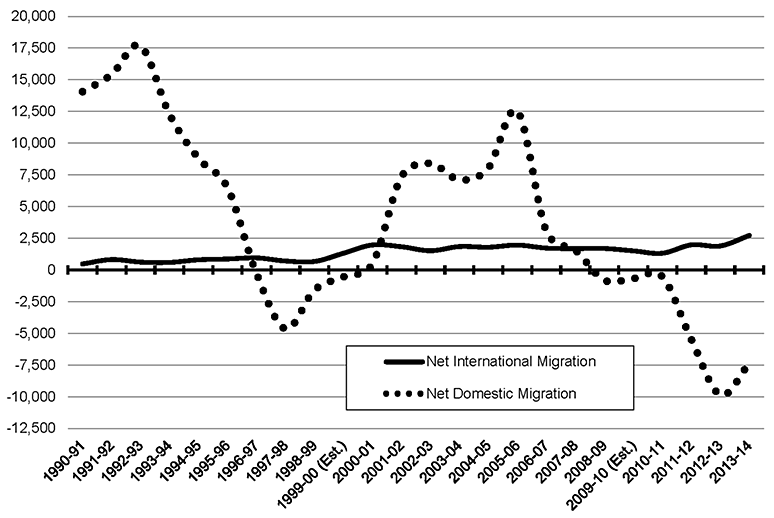 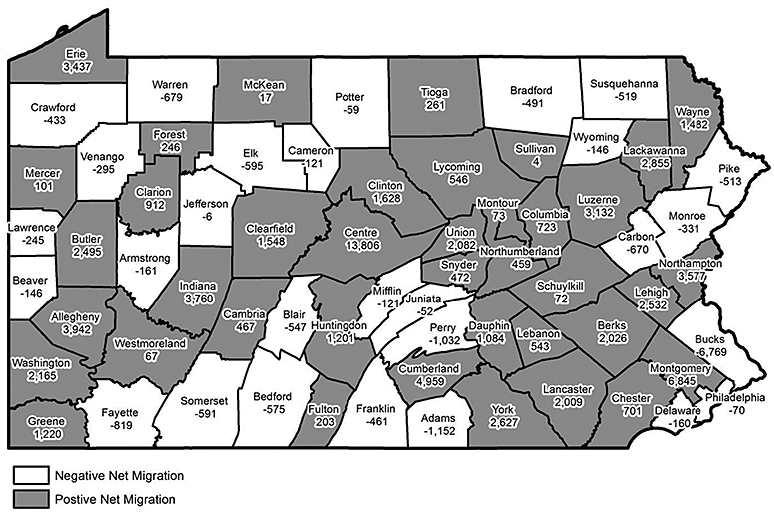 Profile of Adults Who Moved Into and Out of Rural Pennsylvania, 2013* 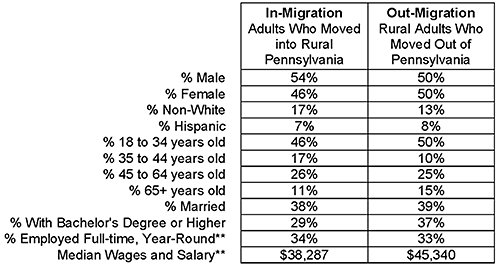 *Includes non-institutionalized people 18 years old and older not enrolled in school for the past 3 months. **Data include those who are employed full-time (35+ hours a week) and year round (50+ weeks are year) and who worked in the preceding week. Data source: 2013 American Community Survey, Public Use Microdata Sample, U.S. Census Bureau. 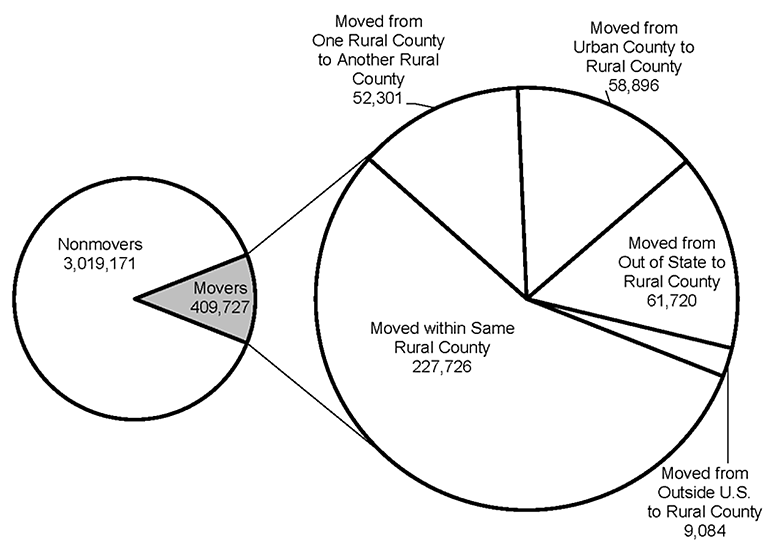 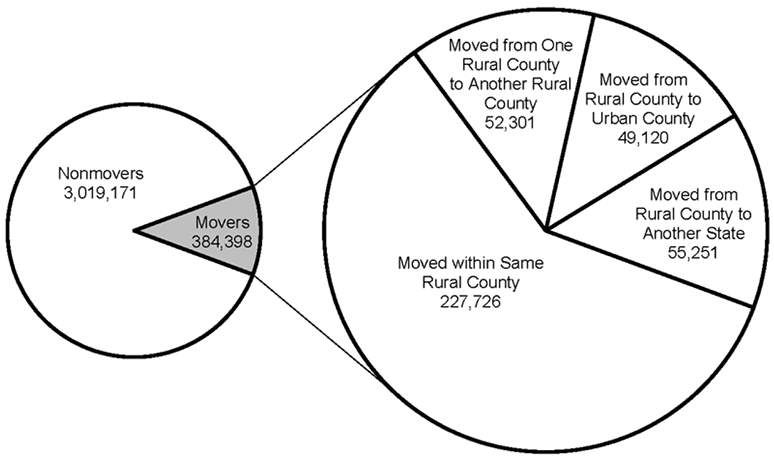 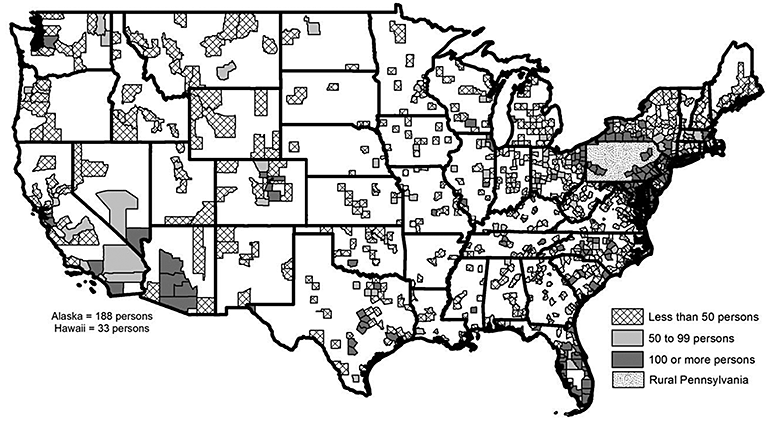 There are, however, a small but growing number of rural commuters who use public transportation to get to work.

Following are some basic characteristics of rural commuters using public transportation, according to data from the 2013 American Community Survey, Public Use Microdata Sample:

According to 2014 fourth quarter data from the Center for Workforce Information and Analysis, the five largest categories of employers in rural Pennsylvania counties were: health care (22 percent): manufacturing (19 percent); state and federal governments (15 percent); school districts (15 percent); and sales/retail (9 percent).

1.2 Percent change in Pennsylvania's urban estimated population from 2010 to 2014.

According to data from the U.S. Army Corps of Engineers, there are 1,552 dams in Pennsylvania’s rural and urban counties. They range in age from relatively new (completed in 2010) to historic, with some more than two centuries old (completed in 1748). Dams across Pennsylvania differ not only in age, but also height, primary purpose, ownership, length, depth, and type.