“The Center for Rural Pennsylvania is continuing its important work, in collaboration with our university faculty partners, to investigate relevant issues to rural Pennsylvania and develop policy considerations for programs and other initiatives,” said Senator Gene Yaw, Center board chairman.

2017 Research Grant Projects
Availability of Medication-Assisted Treatment for Opioid Addiction in Rural and Urban Pennsylvania
Dr. Harry D. Holt of West Chester University of Pennsylvania will assess medication-assisted treatment (MAT) services in rural and urban Pennsylvania. He and his team of researchers will use GIS modeling to determine access to MAT services. They will also examine cost reimbursements and MAT expenses and provide policy considerations based on their findings.

Employment Opportunities for Rural Residents with Disabilities in Pennsylvania
Dr. Susan Boser of Indiana University of Pennsylvania will examine the opportunities and barriers to integrated employment for individuals with disabilities, options and challenges for community providers to address these barriers, and strategies other states are using. Policy considerations will also be presented.

Comparing Rural and Urban Drug Use and Violence in the Pennsylvania Youth Survey
Dr. Jennifer Murphy of the Pennsylvania State University€“Berks will analyze the 2015 Pennsylvania Youth Survey to identify differences between rural and urban schools in substance use and violence. She also will be analyzing the data to identify trends and any school-specific programs that may have contributed to decreased rates of substance use and violence.

Analysis of Cost-of-Living Data for Pennsylvania Counties
Dr. Kenneth Louie or the Pennsylvania State University€“Erie will use data from the C2ER County Cost of Living (COL) Index to determine urban-rural cost-of-living differences and to identify and quantify the factors that determine each county’s COL. The researchers will provide information on why the COL is higher or rising faster in some Pennsylvania counties compared to others.

Happy New Year!  I hope you had a wonderful holiday season and are enthusiastically tackling all of your New Year resolutions.

As you can see from the article on Page 1, the Center’s 2017 Research Grant Program awards have been presented and faculty from the Pennsylvania State System of Higher Education universities and Penn State University are well on their way to starting their research projects.

The Center’s board and staff are also working hard to identify topics for the 2018 grant cycle. Our goal is to zero in on specific questions among a very broad range of issues that are important to our rural residents and communities. Our mandated subject areas for the grant program are rural people and communities, economic development, local government finance and administration, community services, natural resources and the environment, educational outreach, rural values and social change, agriculture, and health and welfare concerns.

With such a wide range of areas, you can understand how challenging it can be to get to the policy-relevant questions that may be answered through our research. We rely heavily on our board members, whose expertise and experience are extensive, to be our eyes and ears in our communities. Our board, with the help of staff, also reaches out to the legislature, educators, state and federal executive branch agencies, nonprofit organizations and others to identify the roots and branches of the issues and formulate pertinent questions that can be addressed through research. We said goodbye to several seasoned board members last year, and are happy to welcome our new members, Dr. Michael A. Driscoll of Indiana University of Pennsylvania and Dr. Timothy Kelsey of Penn State University, to help us continue our work.

Once the ideas for the next research round have been reviewed, and the board approves the targeted research topics, the Center will prepare and issue its formal 2018 Request for Proposals. While the Center’s grant program is only available to faculty at the Pennsylvania State System of Higher Education universities, Penn State University and the regional campuses of the University of Pittsburgh, we encourage cooperation and collaboration between these faculty and other public or private organizations. Look for the Request for Proposals to be posted online in March.

As the year progresses, we’ll continue to share the results of our research, and of course information from our database on rural Pennsylvania, with you.

The Center welcomes Dr. Michael A. Driscoll, president of Indiana University of Pennsylvania (IUP), and Dr. Timothy Kelsey, professor of agricultural economics at Pennsylvania State University, to the board.

Dr. Driscoll joined IUP in 2012. In his tenure, he has focused on diversity and inclusion issues, improving the university experience for military-affiliated students and their families, and strengthening IUP’s relationship with the local community. Previously, he served as the executive vice chancellor and provost of the University of Alaska Anchorage. He earned his Ph.D., MS and BS in electrical engineering at Michigan State University.

Dr. Kelsey has been at Penn State since 1991. He currently teaches courses on community-based research methodologies, economic development tools, and community development. He received his Masters and Ph.D. in agricultural economics from Michigan State University.

At its November meeting, the Center board thanked departing members (from left) Dr. Ted Alter, Dr. Karen Whitney, Sen. John Wozniak and Taylor Doebler (not pictured) for their service to the board and their work on behalf of rural Pennsylvania. 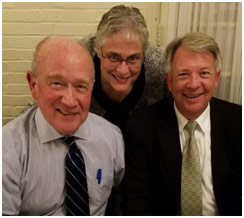 Rural Snapshot: Men and Women in the Workforce 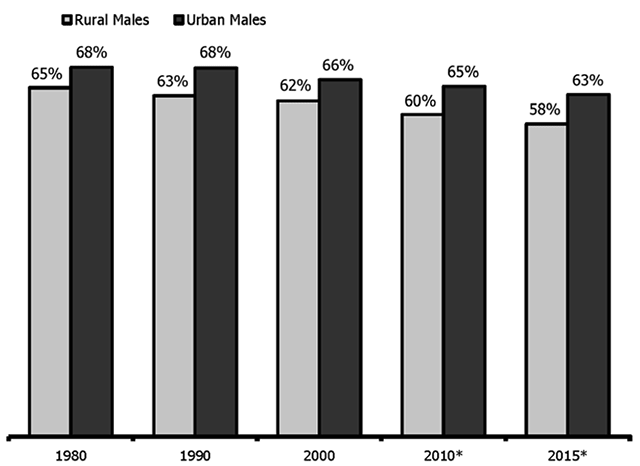 Median Earnings of Rural and Urban Males, 2015
Includes only males 18 years old and older who work full-time and year-round 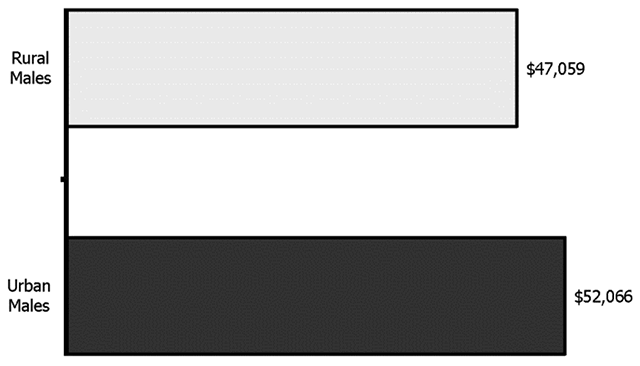 Rural and Urban Males in the Workforce, 2015 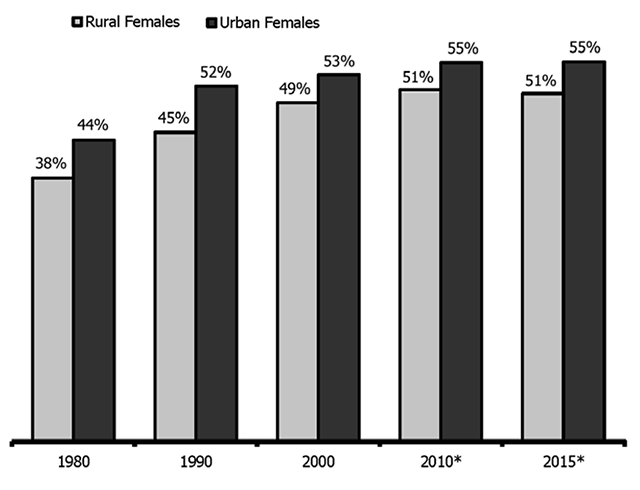 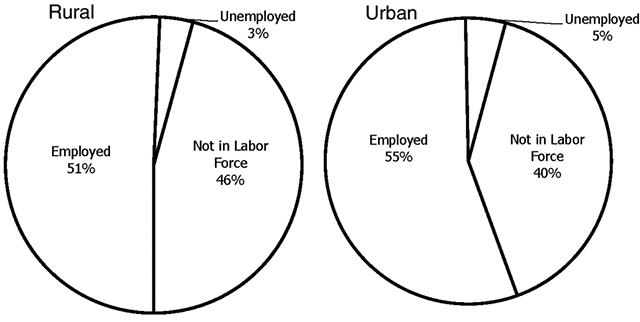 Median Earnings of Rural and Urban Females, 2015
Includes only females 18 years old and older who worked full-time and year-round 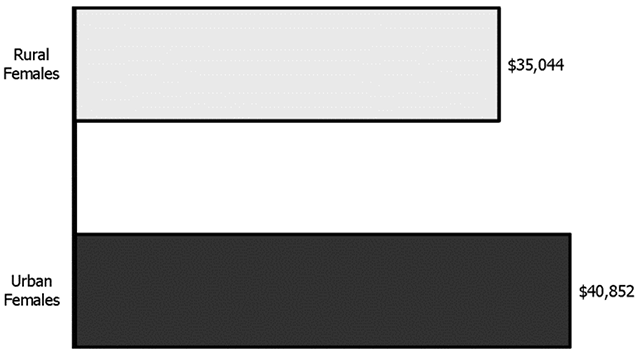 Rural and Urban Females in the Workforce, 2015

From 2007 to 2012, there was a decline in the number of farms (6 percent) and acres of farmland (1 percent) in Pennsylvania and an increase (5 percent) in average farm size, according to research conducted by Dr. Sunita Mondal and Dr. Roger Solano of Slippery Rock University of Pennsylvania.

The study also found that a majority of Pennsylvania farms were medium-sized, ranging between 50 and 179 acres, and were mostly family owned or individual proprietorships (88 percent). Pennsylvania farms sold nearly $5.8 billion, adjusted for inflation, in agricultural products in 2012, up 15 percent from 2007.

The research, sponsored by the Center for Rural Pennsylvania, used data from the 2002, 2007 and 2012 U.S. Censuses of Agriculture to provide a comprehensive analysis of Pennsylvania farmers, the types of farm operations in Pennsylvania, and existing trends and conditions in the state’s agriculture industry. The Ag Census is conducted every 5 years by the U.S. Department of Agriculture’s National Agricultural Statistics Service (NASS) to collect information on land use and ownership, operator characteristics, production practices, income and expenditures.

The research found that male farmers reported the greatest share of agricultural sales (96 percent). In more recent years, female farmers reported higher sales increases, with the value of crops sold increasing 93 percent from 2007 to 2012. This result is promising since female farmers comprise about 14 percent of the total number of farmers in the state. The proportion of minority farmers in the state remained very low (1 percent), and has remained unchanged from 2002 to 2012.

The research also compared Pennsylvania with Delaware, Maryland, New Jersey, New York, Ohio, West Virginia  and the U.S. as a whole in terms of farming as an occupation. In 2012, 52 percent of operators in Pennsylvania reported farming as their primary occupation, which was higher than the national average (48 percent), and lower than Delaware (64 percent) and New York (57 percent). Nationwide, there was a 10 percent decline in the proportion of operators with farming as their primary occupation between 2002 and 2012. In Pennsylvania, there was a 5 percent decline between 2002 and 2012. Ohio witnessed the highest decline of about 12 percent.

For a copy of the research results, Analysis of 2012 Census of Agriculture Data, visit the Center’s website at www.rural.palegislature.us.

Data from the 2015 American Community Survey, Public Use Microdata Sample show that, in both rural and urban Pennsylvania, unmarried partner households comprised 7 percent of all households.

Among unmarried partners that rented their home, 14 percent of rural households and 13 percent of urban households paid more than one-half of their income for rent.

56 Percent of all Pennsylvania bridges located in rural counties.

1,306 Number of rural bridges that are one-lane for two-way traffic.

4,523 Number of rural bridges with a "Good" to "Excellent" superstructure rating.

1,828 Number of rural bridges with a "Poor" to "Critical" superstructure rating.