A study sponsored by the Center for Rural Pennsylvania projects $310 billion in personal wealth will be transferred from one Pennsylvania generation to another by 2025, with $2.6 trillion changing hands by 2065.

“This transfer of wealth provides all Pennsylvania communities with an extraordinary opportunity for charitable investments,” said Senator Gene Yaw, chairman of the Center for Rural Pennsylvania.

In 2008, the Center published the first transfer of wealth (TOW) analysis of Pennsylvania to spark conversations about the magnitude of the assets present in every county of the commonwealth and the opportunities to invest a small portion of those assets toward community betterment projects.

Since that first analysis, however, much has changed in the state and nation. This updated TOW study integrated those changes into its estimates, as well as historical trends and key assumptions about the future, to develop more current estimates for this intergenerational transfer of wealth. The study also updated the wealth scenarios for all 67 Pennsylvania counties.

“It is our hope that, with these updated estimates, residents will once again understand the power of their charitable giving, and will consider making a charitable investment now or through their wills to strengthen their community for generations to come,” Sen. Yaw said.

“Giving is a personal decision. But there are many community members who take the future of their communities personally,” Sen. Yaw said. “Just think what could be achieved over the next 10 or 20 years if we include our community as one of our heirs.”

Background
The Center for Rural Entrepreneurship, a nonprofit organization based in Nebraska, conducted the first TOW analysis and the updated analysis. It developed a methodology for creating scenarios for inter-generational wealth transfer for the state and its counties, using conservative scenarios for the likely transfer of wealth from the base year of 2015 to 2065. The researchers considered 50 years of historical indicators starting with the post-World War II period and extending through 2015, the most recent year for which an adequate number of adjusted indicators necessary to establish current net worth are available, and projected estimates 50 years (to 2065) into the future, annually.

Making the transfer work for our communities
By tapping into some of the wealth that is projected to change hands over the next 10 to 50 years, Pennsylvania communities could take advantage of sustainable funding for community projects. “This is an opportunity to think about community investment in a new way,”  said Barry Denk , Center director. “If communities can capture just 5 percent of this wealth, they can dramatically improve and sustain their communities’ quality of life for decades to come.”

2015 Total Current Net Worth (in billions) 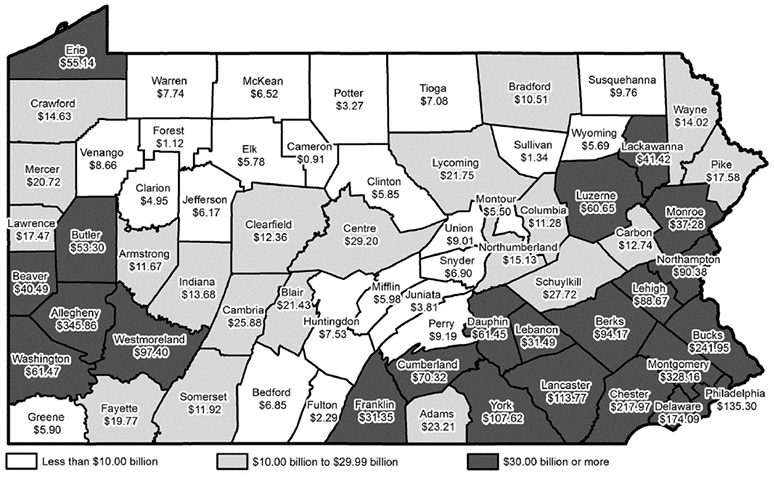 I’m sure that most people, at some point in time, have wished for a crystal ball to take a peek into the future. Knowing what to expect in the coming months or years ahead would certainly be a big help. And while we don’t have a crystal ball at the Center for Rural Pennsylvania, we do have math, which has helped us to formulate some reasonable assumptions about the future, specifically in terms of potential scenarios about the transfer of wealth from one generation to the next.

The transfer of wealth, or TOW, analysis offers two future scenarios of 10 and 50 years for every county, and provides an estimate of current net worth, as well. These scenarios are definitely worth reviewing, and can be found on the Center’s website.

I’m encouraged by the wealth scenario for my home county, and believe that every county scenario can be a real resource for philanthropic groups, community and economic development organizations, financial planners, agricultural interests, community residents and others working to enhance the quality of life in their county.

We appreciate the work of the Center for Rural Entrepreneurship for completing this TOW analysis, as well as the work of the many individuals who participated on the Technical Advisory Committee.

To learn more about the TOW analysis and the potential transfer of wealth from this generation to the next, I encourage you to review the report, Wealth Transfer in Pennsylvania 2016, which is available on the Center for Rural Pennsylvania’s website. It’s the closest thing to a crystal ball that we could muster.

This snapshot looks at rural and urban seniors, age 65 years old and older, who are enrolled in Medicare health plans that provide Part A and Part B benefits. The graph on PACE/PACENET, however, includes data for seniors who may be enrolled in other health plans as well as Medicare. Unless noted otherwise, data are from the Centers for Medicare and Medicaid Services Public Use File, State/County-All Beneficiaries. 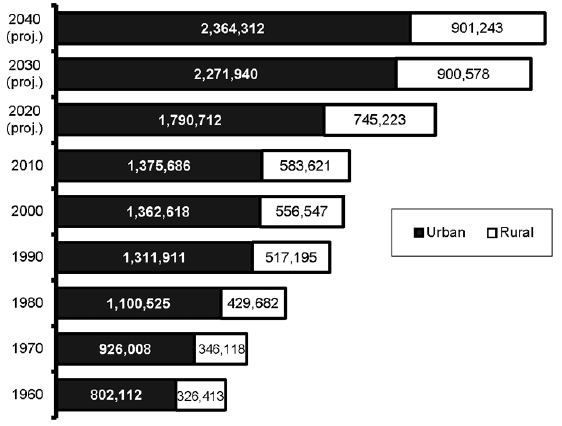 Percent of Total Population Enrolled in Medicare Part A and Part B, 2014 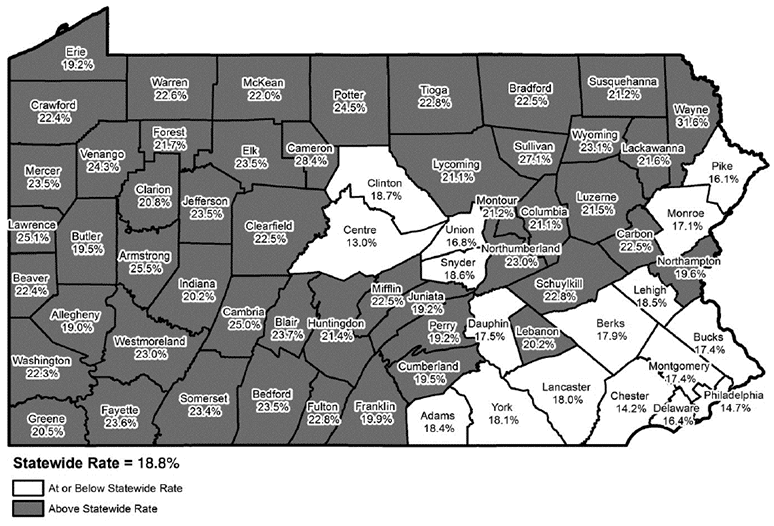 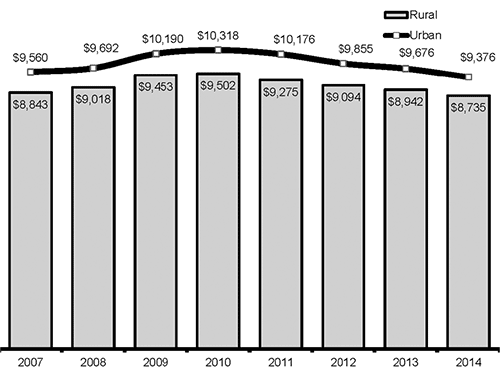 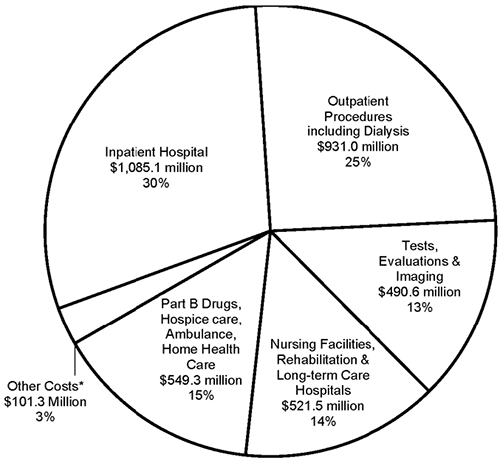 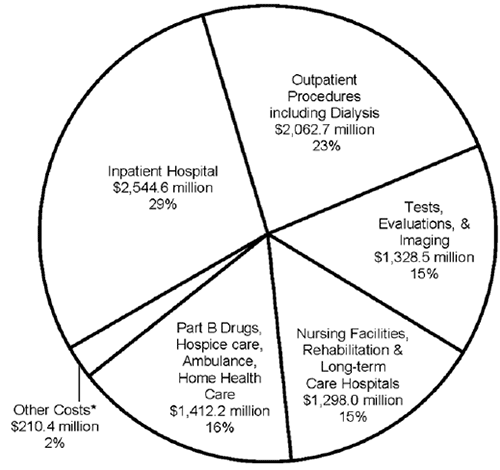 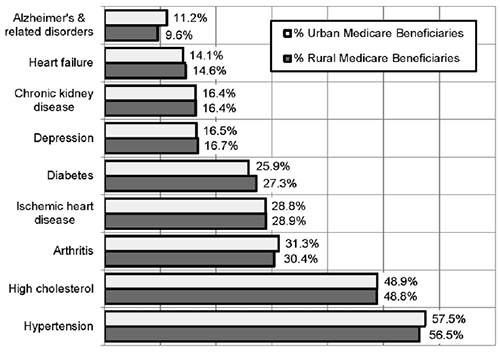 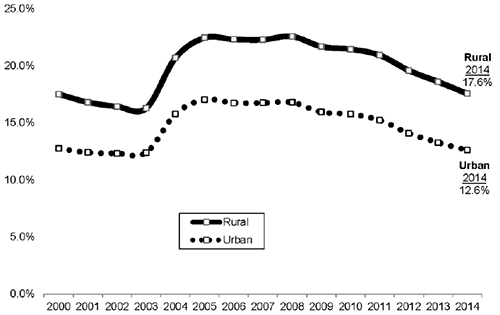 The Give and Take of Tax Season

According to data from the Internal Revenue Service (IRS), the majority of rural tax filers get money back after filing their federal income taxes.

Not everyone, however, received a refund. In 2013, 14 percent of rural and 16 percent of urban filers owed money when they filed. The average amount owed was $4,120 among rural, and $5,141 among urban filers.

Rural and urban Pennsylvanians were not the only filers reaping a return. In 2013, 76 percent of filers across the U.S. received a federal refund, which was $3,025, on average, while about 18 percent owed money at the time of filing. The average amount owed in 2013 was about $5,207.

These differences were apparent among rural and urban Pennsylvanians as well (see graphs below). Urban Pennsylvania tax filers tended to owe more money than rural Pennsylvania filers. For example, in 2013, 8 percent of rural low-income filers owed federal taxes at the time of filing, owing $1,080, on average. In comparison, the 9 percent of urban low-income tax filers who owed taxes at the time of filing owed $1,126, on average. 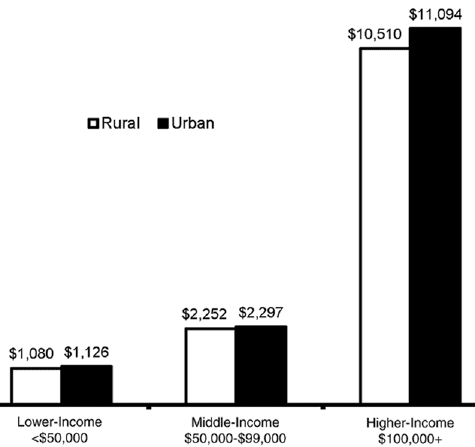 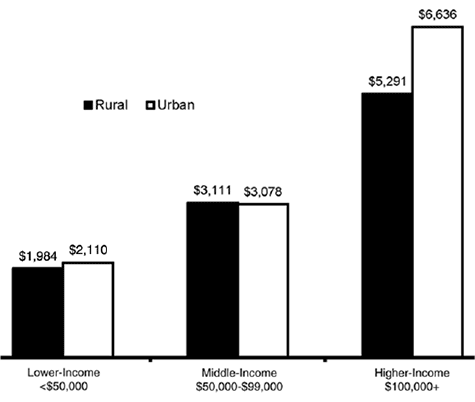 The Pennsylvania Department of Education (PDE) is encouraging rural nonprofit organizations to sponsor Summer Food Service Programs (SFSP) in their area. SFSP is a federally funded program that serves free meals to eligible children during the summer months. PDE administers the program, which is operated nationally by the U.S. Department of Agriculture. SFSP is a great resource available for local sponsors who want to combine a meals program with a summer activity program. Nonprofits that sponsor the SFSP receive reimbursement for qualifying meals served at approved SFSP sites. There is great need for SFSP sites, particularly in rural Pennsylvania, where many children are eligible for free and reduced price school meals.

Just the Facts: Vehicle Crashes and Cell Phone Use

In 2014, Allegheny, Montgomery and Philadelphia counties had the highest number of cell phone crashes, each with more than 70. Five counties, all rural, had no reported cell phone crashes: Cameron, Forest, Potter, Sullivan, and Venango.

Pennsylvania had the nation’s 10th highest number of fatalities (37).

Number of Vehicle Crashes Involving Cell Phones per 100,000 Licensed Drivers
in Rural and Urban Pennsylvania, 2004 to 2014