When it comes to Marcellus Shale development, discussions about its potential implications for the commonwealth's communities and natural environment run from the good to the bad to everywhere in-between.

A multi-year study conducted by Penn State University researchers on the social and economic impacts of Marcellus Shale development in Pennsylvania will no doubt add to these varied conversations. The longitudinal research, sponsored by the Center for Rural Pennsylvania, indicates that Marcellus Shale development impacts are dynamic and complex, and are influenced heavily by the pace of development, the location of development, and pre-existing characteristics of the population living in and around the area of development. Further, the research found that individuals near the development tend to see the impacts in many ways: it’s not all positive or all negative. It involves tradeoffs.

Research background
In 2012, researchers from Penn State University began to chronicle community changes in four counties €“ Bradford, Lycoming, Greene and Washington €“ to learn more about the social and economic impacts of Marcellus Shale development in Pennsylvania.

In this second wave of research, which began in 2014, the team looked to re-examine the impacts on crime, housing, the economy, agriculture, health and health care access, and traffic incidents in relation to Marcellus Shale development. The researchers also conducted interviews with social service providers and low-income residents in the study counties to assess any changes in social support and housing access for low-income families.

Findings
In general, the research results found that there is no one, singular answer to the question “what is the impact of natural gas development?” The research found that impacts vary by geographic location, by point in time, by social group, and by the type of impact that is of interest.

Conclusions
The research concluded that it is important to understand the local effects of development as aggregate trends tend to mask local and more individual experiences.

The research suggests that state policy needs to recognize these local impacts to be more flexible and responsive to local issues, and to be more adaptable as industry and local communities respond to industrial and technological changes. Another implication is that standard methods of public data collection do not match the need to document impacts at very local scales. Comprehensive monitoring at the municipal level is needed, so that attention, resources or programs may be targeted to areas or populations that may be especially affected, particularly in relation to funds, such as impact fees, that are intended to compensate for impacts. The research also suggests that policy approaches are needed that effectively recognize disparities in experiences. Since certain segments of the population are more vulnerable to rapid economic and industrial change, policies need to consider mechanisms that will help groups that may be negatively affected, and offer security for those who are most vulnerable.

As noted in the article on Page 1, opinions and ideas about the impact of Marcellus Shale development run far and wide. But whether you are for it, against it, or somewhere in between, you have to admit that the development has brought about considerable change across the commonwealth.

The first wave of the research was published in 2014, and the results indicated that the effects of development were not very consistent across places or time periods.

The team began the second wave of research in 2014, and now, that second wave has been completed. The research again found that, overall, development impacts vary by geographic location, point in time, social group, and topic. The seven research areas examined were crime, economic changes, housing, agriculture, health, traffic, and low-income individuals. The results within each of these research areas included both pluses and minuses, and emphasized the need for public policies that are flexible, responsive to local needs, and adaptable as industry and local communities respond to industrial and technological changes.

The research also emphasized that the standard methods of public data collection are not providing the type of information needed for research at very local levels. The researchers therefore suggested that more comprehensive monitoring at the municipal level is needed.

Visit the Center’s website for a copy of the full report, The Marcellus Shale Impacts Study Wave 2: Chronicling Social and Economic Change in Northern and Southwestern Pennsylvania, as well as the seven topical reports.

At its March meeting, the Center for Rural Pennsylvania’s Board of Directors elected officers for the 2017-2018 legislative session. 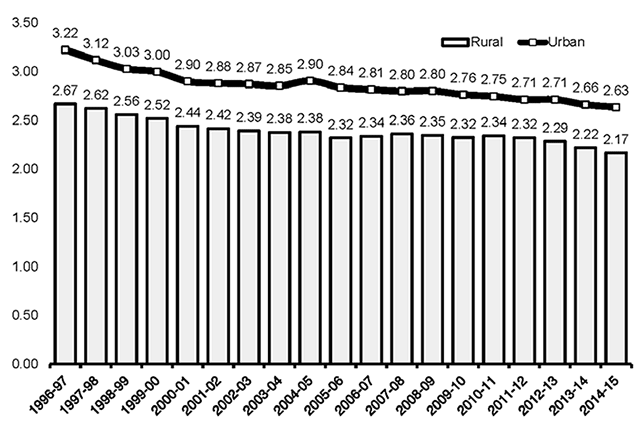 *Number of hospital beds set up and staffed per 1,000 residents. Data source: Pennsylvania Department of Health. 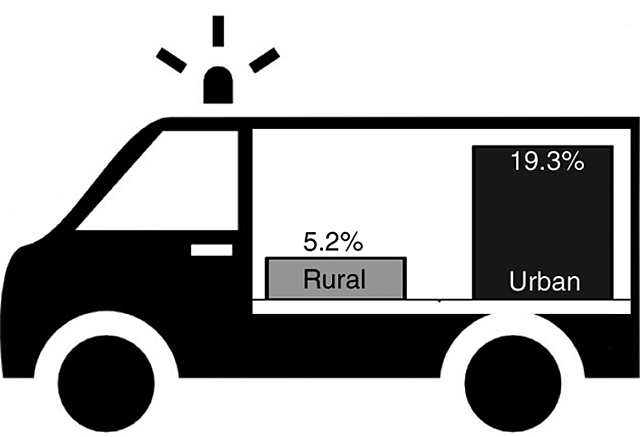 Number of Rural and Urban Health Care Providers per 100,000 Residents 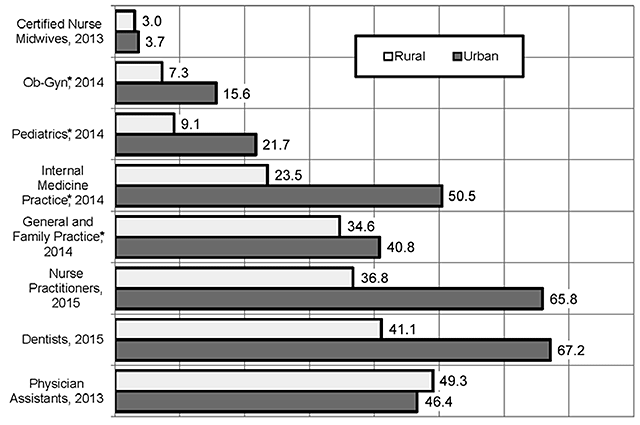 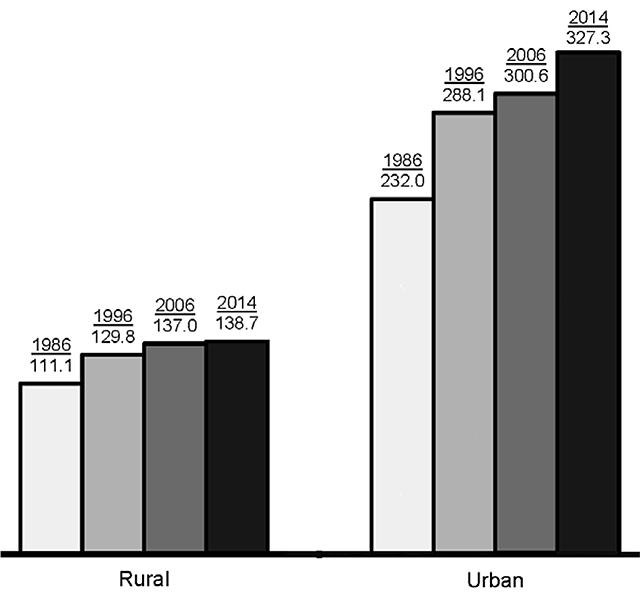 HPSAs are areas that have shortages of primary medical care, dental or mental health providers and may be geographic (a county or service area), demographic (low-income population) or institutional (comprehensive health center, federally qualified health center or other public facility). 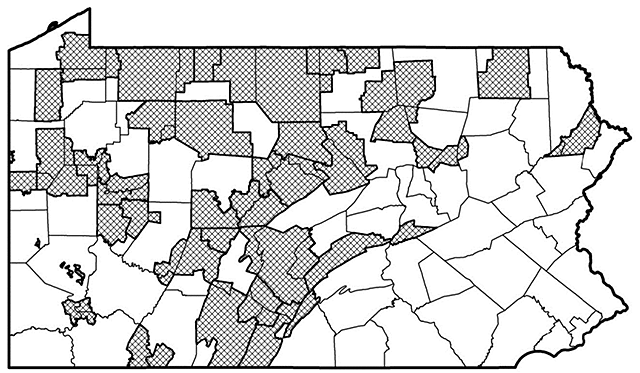 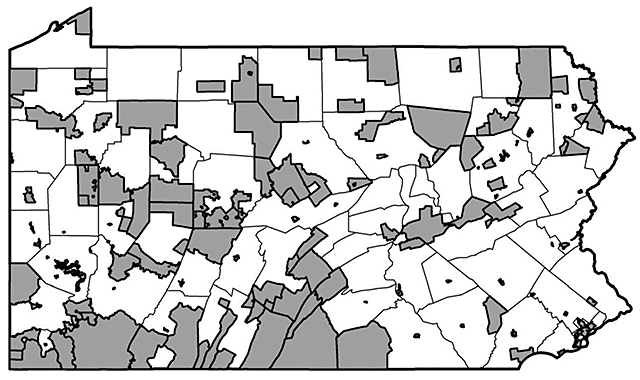 Rural Manufacturing: Down But Not Out

Rural manufacturing jobs may have taken a hit over the past 15 years, but they certainly aren’t down for the count.

A closer examination of the data revealed that most rural manufacturing jobs were lost over one period but then stabilized over another period.

The first period was from 2002 to 2009, when the number of rural manufacturing jobs plummeted by 23 percent. Most of this loss was between 2008 and 2009, during the Great Recession, when 29,800 manufacturing jobs were eliminated.

While the number of manufacturing jobs in rural and urban Pennsylvania and the U.S. are still below their historic highs, the manufacturing industry remains a vital economic sector. According to 2015 data from the U.S. Bureau of Economic Analysis, manufacturing contributes 12 percent, or $85 billion, to Pennsylvania’s Gross Domestic Product. 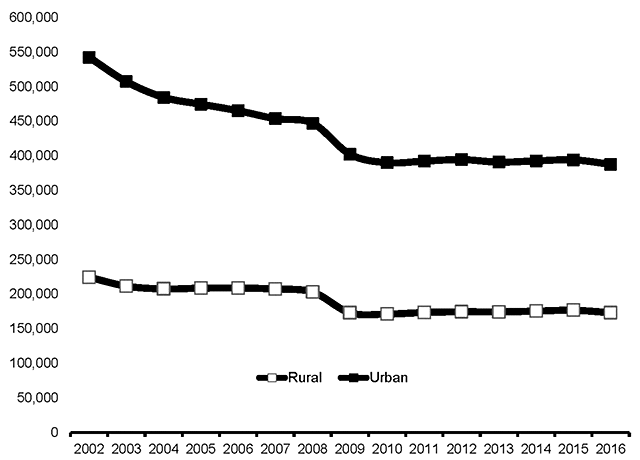 37 Percent of households with children (<18 years.)

$69,688 Median household income (About 8 percent of households were in poverty).

Data source: 2015 American Community Survey, Public Use Microdata Sample (ACS-PUMS), U.S. Census Bureau. Data include all occupied single family homes and mobile homes on lots of one acre or more and have agricultural sales of $1,000 or more. The weighted sample included 31,233 households, or little more than one-half of Pennsylvania's nearly 59,300 farms.

Among rural and urban married couples, women contributed 33 percent of income, on average, to total family income, according to data from the 2015 American Community Survey, Public Use Microdata Sample.

A closer examination of the data found that, among 24 percent of rural married couples and 26 percent of urban married couples, women contributed more than one-half (51+ percent) to their family’s total income. Here’s more on these “female breadwinners” and their families.

Female breadwinners are 53 years old, on average, and have median incomes of $44,757. Seventy-eight percent are employed and 37 percent have a bachelor’s degree or higher.

The men in rural female breadwinner families are 56 years old, on average, and have median incomes of $23,820. Fifty-four percent are employed and less than 20 percent have a bachelor’s degree or higher.

Thirty-four percent of female breadwinner families have children under 18 years old living in their home. Additionally, 88 percent of these families live in their own home and 12 percent are renters.