Lingering Effects of the Great Recession

It’s been more than nine years since the Great Recession hit U.S. households, businesses, and the overall economy. This 19-month downturn, which started in December 2007 and ended in June 2009, caused unemployment rates to escalate, home foreclosures to spike, household incomes to drop, and businesses to close their doors. Almost a decade later, the nation and Pennsylvania have seen signs of recovery, but some effects of the recession still seem to linger.

To better understand how rural and urban Pennsylvania have fared since the end of Great Recession, the Center for Rural Pennsylvania examined data from the U.S. Bureau of Labor Statistics, and the U.S. Census Bureau to analyze a range of economic indicators, including employment, unemployment, wages, and housing.

Overall, the analysis found that employment, the number of businesses, and the number of housing starts in rural Pennsylvania have not returned to pre-recession levels.

One bright spot in the recovery is that average weekly wages for rural workers have increased slightly from 2007 to 2017, from $744 to $806. Also, the wage gap between rural and urban workers has narrowed somewhat. However, urban workers still earn 28 percent more per week, on average, than rural workers.

The analysis also revealed that rural Pennsylvania is not alone in its post-recession economic languor, as rural America also continues to experience a slow economic recovery. Similarly, the economic gap between rural and urban America has increased, making future growth for rural areas more challenging.

Number of Rural and Urban Pennsylvania Employees, 2007 to 2017*
Note: Graph not to scale. 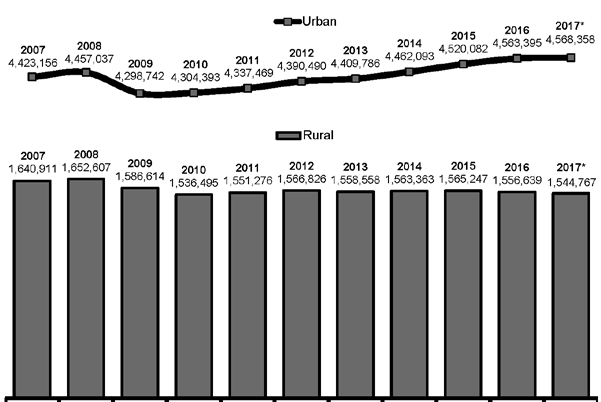 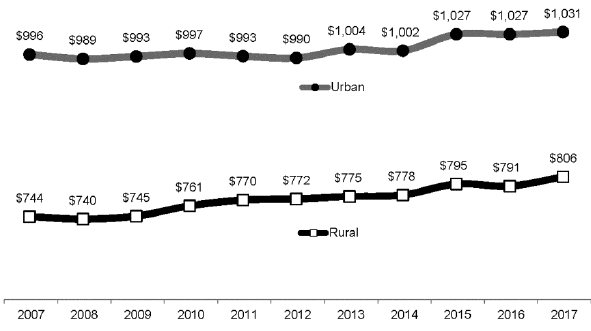 Data adjusted for inflation using the CPI-U with 2017=100. Analysis only included data assigned to a specific county. Data source: Quarterly Census of Employment and Wages, U.S. Bureau of Labor Statistics.

“Broadband access means so much more than interactive gaming or connecting with your family and friends,” said Center Board Chairman Sen. Gene Yaw. “Broadband access also means having access to your healthcare provider, completing a classroom assignment, and maintaining and expanding your business. The Center’s board will receive testimony on the challenges and opportunities regarding rural broadband deployment because it impacts a large part of our everyday lives.”

More information about the hearing is available here.

In January, the Center announced its 2018 research grant awards, one of which is a year-long project to analyze broadband access across Pennsylvania.

Dr. Sascha D. Meinrath of Pennsylvania State University, and a team of researchers, will provide a comprehensive look at the current availability of high-speed, fixed broadband services in rural Pennsylvania. Dr. Meinrath is using the Federal Communications Commission’s current definition of broadband, which is defined as a connection with 25 megabits per second as the minimum download speed and 3 megabits per second as the minimum upload speed.

The Center’s Board of Directors was eager to move forward with this research since broadband access is so important to the economic vitality and overall welfare of our rural communities.

We have heard, firsthand, from people and businesses in our communities about the challenges in having quality broadband access at home and at work. While many of us access the internet with the touch of a finger on a cell phone or a computer at home, in a coffee shop or even in our car, think about the high school student whose only reliable access is at her school and she is working on a research project as a graduation requirement. Or what about the small business that wants to expand operations by marketing its goods and services on the internet and the only access is over a landline? What about the rural campground owner whose customers want high-speed internet access? And how can home health aides transmit data back to a clinic or hospital if there is no high-speed connection in the communities they serve? In today’s global society, the availability, accessibility and affordability of industry-standard, broadband access remain a challenge for rural areas of Pennsylvania.

As part of the Center’s commitment to this issue, the board will also be hosting a public hearing on April 5 as noted on Page 1. We want to hear from providers and consumers about the issues, challenges and opportunities of delivering broadband services in rural Pennsylvania. It is recognized that the geography of rural Pennsylvania and the lack of population are issues that affect availability, access and cost. Yet, we also have seen that rural Pennsylvania can serve as a testbed for innovation and unique ways of dealing with the challenges of geography and isolation.

From the research currently underway and the public hearing, the Center will gather and share the findings and information with the General Assembly and others. We hope to help identify options and viable solutions on how to expand and deploy broadband throughout rural Pennsylvania.

This Rural Snapshot looks at the devices Pennsylvanians use and the type of internet connection that is available and accessible to them. The data source for the graphics is the Federal Communications Commission, unless otherwise noted. 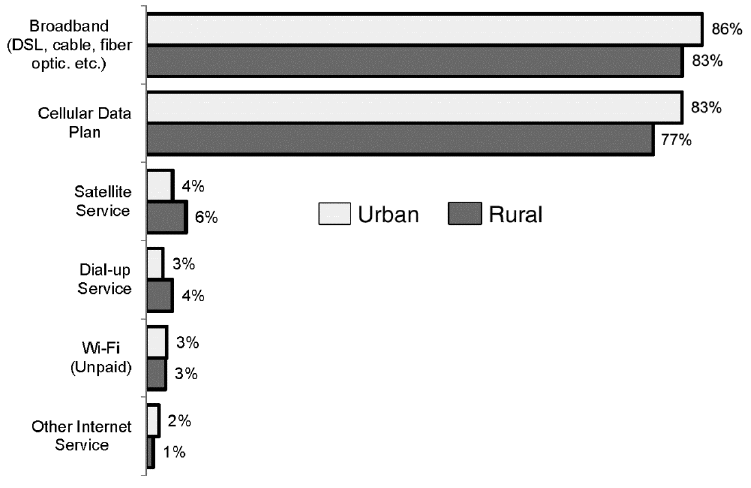 Note: Total will not add up to 100 percent due to households having multiple methods of accessing the internet. ACS-PUMS does not provide a definition of speed for broadband connectivity. Data only include households with internet access. Data source: 2016 American Community Survey, Public Use Microdata Sample, U.S. Census Bureau. 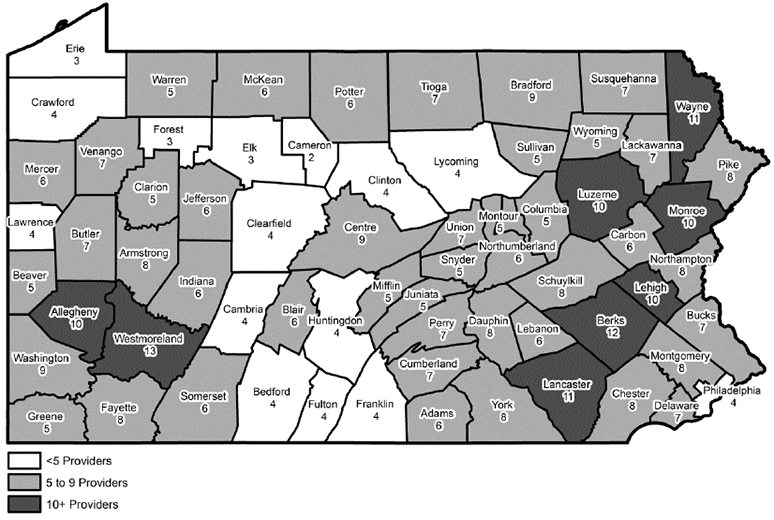 This map shows the number of unique residential broadband internet service providers that reported providing service in one or more Census Blocks in each county. Broadband is defined as 25 Mbps download and 3 Mbps or higher upload. Excluded are wireless and satellite internet providers. 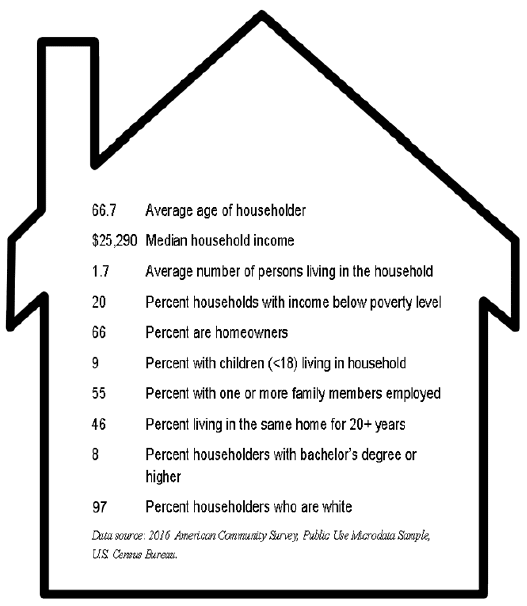 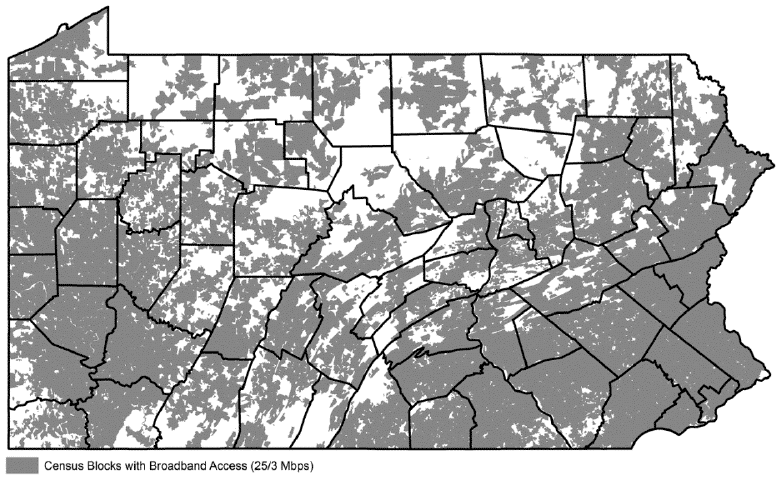 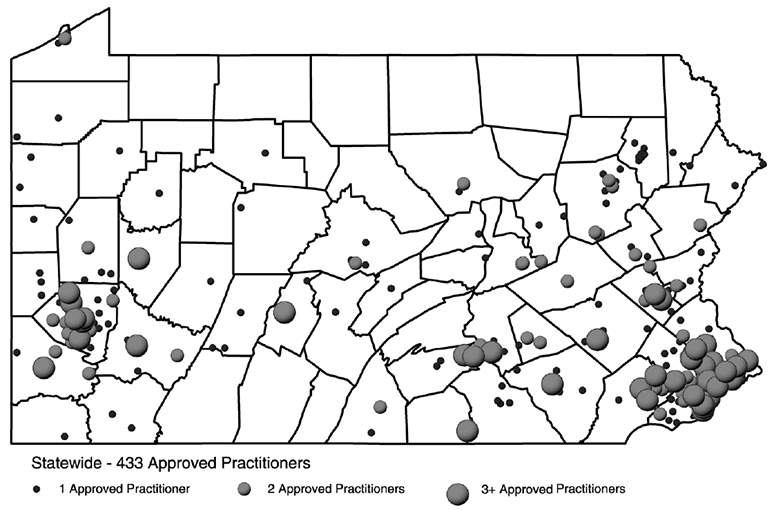 Did You Know. . . Female Elected Municipal Officials in 2018

45 Percent of rural female elected municipal officials who are Republican; 31 percent are Democrat, 4 percent are independent or other party, and 20 percent did not report their political affiliation.

35 Percent of urban female elected municipal officials who are Republican; 54 percent are Democrat, 2 percent are independent or other party, and 9 percent did not report their political affiliation.

It’s no surprise that family sizes have been shrinking over the past few decades. In 1970, rural families had 3.5 people, on average, according to U.S. Census Bureau data. By 2016, the average dropped to 3.0. The Census defines a family as a group of two or more people related by birth, marriage, or adoption, and residing together.

Despite this downward trend in family size, big families still exist. To learn more about big families, which are defined as families with six or more members, the Center for Rural Pennsylvania analyzed data from the U.S. Census Bureau’s 2016 American Community Survey, Public Use Microdata Sample (ACS-PUMS).

Seventy-eight percent of rural and 74 percent of urban big families lived in their own home. These homes had four bedrooms, on average. The median value of the rural big family home was $170,000, and the urban median was $235,000.

In 2016, 79 percent of rural and 82 percent of urban big families received no income from agricultural sales.