Volunteer fire companies have a strong history in Pennsylvania but have been challenged by a decrease in volunteers and a range of financial constraints over the past 30 years.

The research, sponsored by the Center for Rural Pennsylvania, used data from the Pennsylvania Department of Community and Economic Development, the Governor’s Center for Local Government Services, Internal Revenue Service (IRS) 990 Forms, and Guidestar for the 5-year period of 2008 to 2012.

The research also found that municipal financial support of VFCs decreased from 2008 to 2012, except among townships of the second class. Capital budgets for all VFCs also decreased over the 5-year study period. All of these factors point to difficult financial situations for VFCs.

Based on the study results, the researcher provided several considerations for state agencies, municipalities and VFCs that may help VFCs improve or maintain their financial strength. For example, state agencies may provide VFCs with more education about service revenue billing; municipalities may provide more support for service billing or via third parties; and VFCs could work more closely with state and local officials to gather more information about fire taxes and other sources of revenue for capital purchases. The researcher also suggests that the state provide incentives for VFCs to report call data, and to develop a database of VFCs in Pennsylvania, which would include information on merged/consolidated VFCs in Pennsylvania. State agencies could also provide grant writing assistance and instruction to small rural VFCs with with operating budgets of less than $150,000, since they did not receive as much grant monies as other VFCs.

For a copy of the research report, The Financial Fitness of Pennsylvania Volunteer Fire Companies, visit the Center’s website at www.rural.palegislature.us

The Center has released its 2017 Request for Proposals (RFP) and is accepting applications for its Research Grant Program.

All applicants must first submit a Letter of Intent, which is due May 23.

For more information on the RFP and the Center’s Research Grant Program, visit www.rural.palegislature.us/grants_rfp.html.

When it was created in 1987, the Center for Rural Pennsylvania was charged with promoting and sustaining the vitality of Pennsylvania's rural and small communities. While that mission may seem expansive, it actually allows the Center to address the wide range of issues that impact our rural communities.

With the release of its 2017 Request for Proposals, or RFP, also featured on Page 1, the Center is looking to examine a variety of other important topics through its Research Grant Program.

Topics for the 2017 RFP include an analysis of emergency medical services personnel, the economic impact of hunting and fishing in Pennsylvania, employment opportunities for rural residents with disabilities, and the availability of medication-assisted treatment for opioid addiction in rural and urban Pennsylvania.

The research topic on medication-assisted treatment was developed after hearing testimony on this treatment at several public hearings on heroin and opioid addiction sponsored by the Center. Over the past 3 years, the Center has been making its way around the state to gather information and insights on the heroin and opioid epidemic that has been plaguing our state and our nation. It’s a topic that the Center never imagined to consider or confront, but one that our mission and mandate certainly compelled us to address.

Over the next several months, the Center will conduct other public hearings on this epidemic, as our board and staff are committed to uncovering more ways in which our commonwealth can address this crisis.

Thank you to all who have supported the Center at these hearings €“ participants, panelists, facility hosts and attendees €“ and thank you to those who continue to offer their support in addressing this critical issue.

Center Sponsors Third Round of Public Hearings on Heroin/Opioid Epidemic

More than 160 people attended two public hearings on the heroin/opioid epidemic sponsored by the Center for Rural Pennsylvania on April 1 and April 21.

In this third round of hearings held by the Center over the past 3 years, law enforcement, treatment and health care professionals, and local government officials talked about the ways in which they and their organizations are confronting this epidemic.

The April 1 hearing was held at the University of Pittsburgh-Bradford and was hosted by Center Board Member and Pitt-Bradford President Dr. Livingston Alexander.

The April 21 hearing was held at Geisinger-Lewistown Hospital and was hosted by Sen. Jake Corman.

A third hearing is scheduled for June 2 in Aliquippa.

More details about the hearings are on the Center’s website at www.rural.palegislature.us. 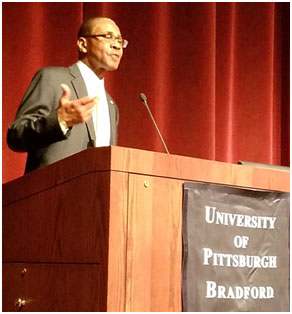 Dr. Livingston Alexander, president of the University of Pittsburgh-Bradford and Center board member,
welcomed more than 100 attendees to the April 1 public hearing on heroin at Pitt-Bradford.

The graduation rates, grouped into 4-year, 5-year and 6-year cohorts, are a calculation of the percentage of students who have graduated with a regular high school diploma within a designated number of years since the student first entered high school. The rate is determined for a group of students who have all entered high school for the first time during the same school year. Unless otherwise noted, the data used here are from the 4-year graduation cohort. All data are from the Pennsylvania Department of Education unless noted otherwise. 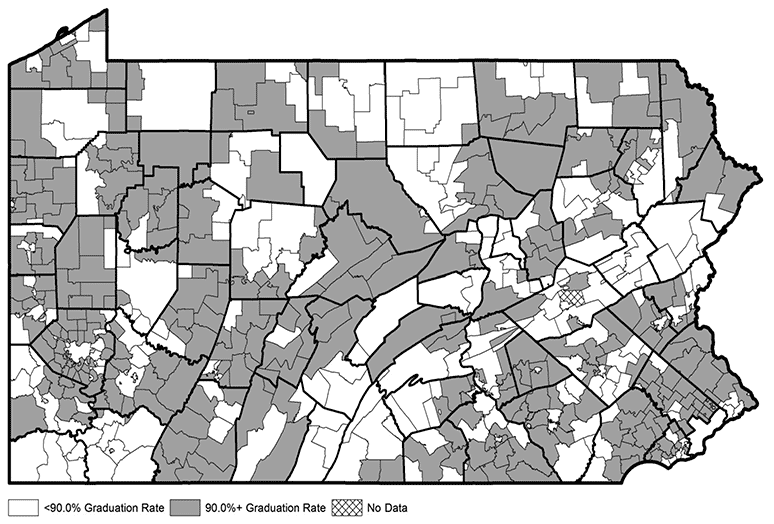 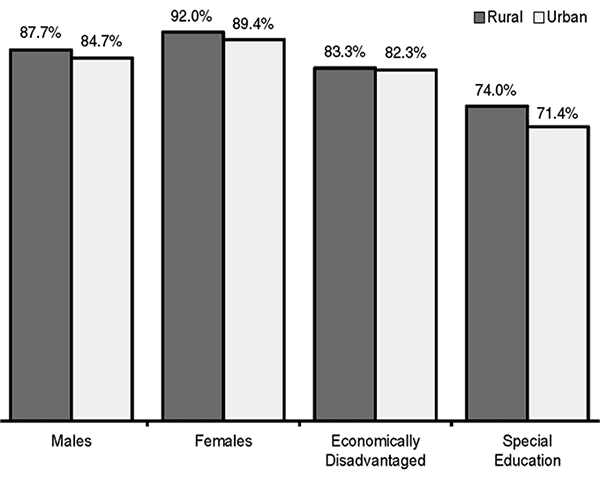 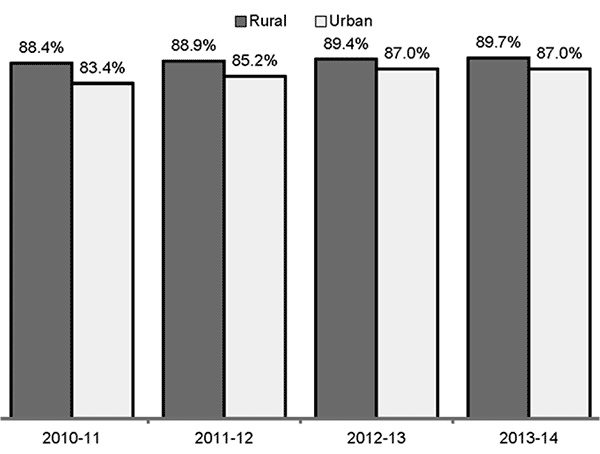 Percent of High School Seniors Planning to Attend a Postsecondary Institution after Graduation, 2009-10 to 2013-14 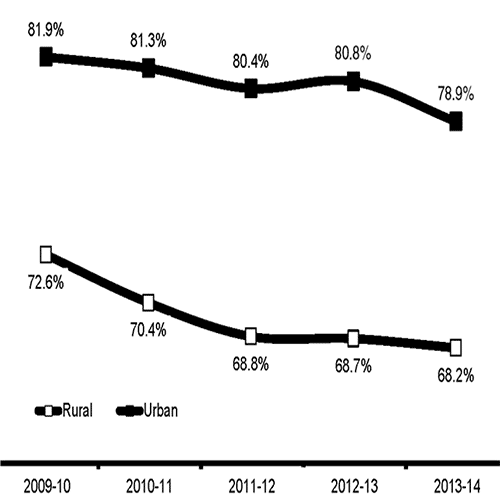 High School Dropout Rates by State: Percent of Young Adults (18-34) Not Enrolled in School and No High School Diploma or GED, 2014 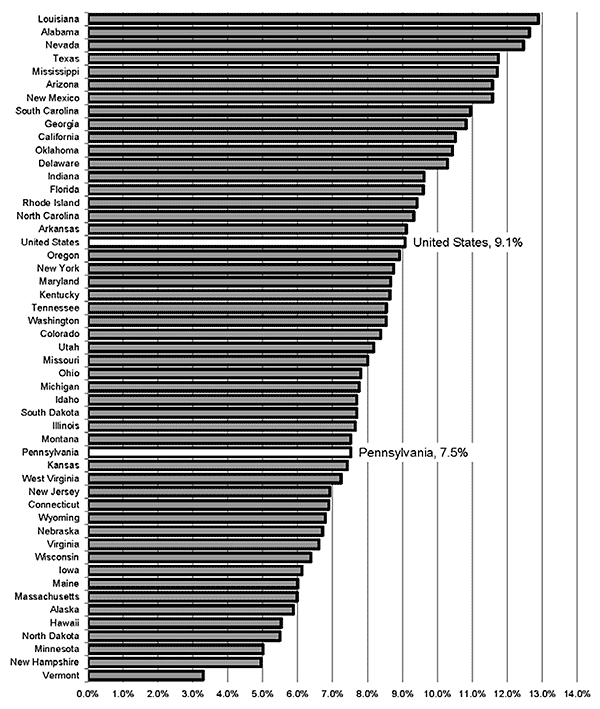 In 2014, 8 percent of rural and 7 percent of urban young adults (18-34) were high school drop outs (not enrolled in school and did not have a high school diploma or GED).

Hotel and Motel Trends Across the State and Nation

An estimated 189 million travelers came to Pennsylvania in 2013, with 65 million staying overnight, according to data from the Pennsylvania Office of Travel and Tourism.

Travelers in rural Pennsylvania had a choice of 534 hotels and motels, according to second quarter 2015 data from the Pennsylvania Department of Labor and Industry.

From 2005 to 2015, the number of hotels and motels increased in rural Pennsylvania by 8 percent.

From 2005 to 2014, the number of hotels and motels across the U.S. increased 6 percent, according to the U.S. Census Bureau’s County Business Patterns. The largest increases in hotel/motel accommodations were in North Dakota, Oklahoma, and Texas, each with increases of 30 percent or more.

Seventeen states saw decreases in the number of hotels and motels. The steepest declines were in Nevada, Maine, and Vermont, with a 7 percent or more decline.

Among all the states, Pennsylvania had the 17th highest increase (7 percent) in the number of hotels and motels.

Number of Hotels and Motels in Pennsylvania, 2nd Quarter 2015 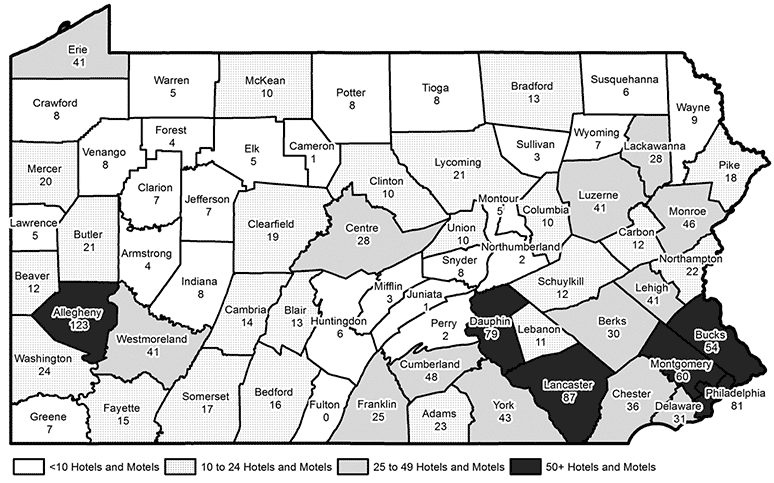 Data source: Pennsylvania Bureau of Labor and Industry. Map by the Center for Rural Pennsylvania.

The majority of both rural and urban bankruptcy filings were consumer, or nonbusiness, filings (97 and 96 percent, respectively). Consumer debt is debt incurred by an individual primarily for a personal, family, or household purpose. If the debtor is a corporation or partnership, or if the debt related to the operation of a business predominates, the debt is considered to be business.

While business bankruptcy filings are only a fraction of the total filings (less than 5 percent), they have increased. From 2014 to 2015, there was a 6 percent increase in rural business filings. Urban business filings, however, decreased 25 percent.

Within Pennsylvania, all but 15 of the state’s 67 counties had a decline in bankruptcy filings. Among these counties, the top three were Cameron, Somerset, and Blair. In each, the number of filings doubled. Per capita, the three counties with the highest number of bankruptcies were Pike, Monroe, and Somerset, each with 4.0 or more filings per 1,000 residents.

Nationwide, every state had a decline in bankruptcy filings. The three states with the largest declines were California, Wyoming, and Colorado, each with a decline of 22 percent or more. Pennsylvania had the nation’s 23rd largest decline in bankruptcies at 12 percent. Per capita, the three states with the highest number of bankruptcies were Tennessee, Georgia, and Alabama, each with 5.0 or more filings per 1,000 residents. Pennsylvania had the nation’s 33rd highest bankruptcy rate with 1.8 per 1,000 residents.