Research Examines the Cost of Living in Pennsylvania

The research, sponsored by the Center for Rural Pennsylvania and conducted in 2017, is a follow-up to a cost-of-living (COL) study conducted by Kurre on behalf of the Center in 2000.

The current research found that the key factors for the cost of living to be higher in some areas than others are income, population density, and the overall population in an area.

Research background
This research provides new and current data on the cost of living in Pennsylvania’s rural and urban areas. It explored several important issues, including whether the rural COL advantage still exists, if it has increased or dwindled, why it exists, and how Pennsylvania compares on the urban-rural cost differential with two other peer states, namely Ohio and Florida.

Cost-of-living data
The researchers used data from the Cost of Living Index (COLI), which is from the Council for Community and Economic Research (C2ER).

C2ER uses raw price data collected from approximately 300 urban communities each quarter to compute an index with the base of 100 equaling the average for the communities nationwide. Data are available for the overall cost of living in urban areas, and for six subcategories: groceries, housing, utilities, transportation, health care, and miscellaneous goods and services.

The researchers also used a statistical approach developed by Kurre to estimate the cost of living in rural counties, since the traditional COLI only provided data for urban areas and larger communities and not for rural areas.

Research results
Overall, the research found that Pennsylvania’s rural counties have a lower cost of living than urban counties for five of the six categories included in the research: groceries, housing, transportation, health care, and miscellaneous goods and services. In the housing category, costs for housing were significantly lower in rural areas than in urban areas. This is especially important since housing typically makes up about one quarter to one third of a family’s budget. For the utilities category, costs were higher in rural counties than in urban counties.

The overall cost of living tended to be highest among Pennsylvania counties in the southeastern and southwestern parts of the state.

When comparing Pennsylvania’s cost of living to other states nationwide, the research found that, on a population-weighted basis (again to account for the larger number of people living in higher-cost urban areas), Pennsylvanians pay about 10.7 percent more overall, on average, than other Americans.

Housing again was the key category driving the higher overall COL in the state, since Pennsylvanians pay 26.8 percent more, on average, for housing than Americans elsewhere.

Peer state comparisons
The research included both Ohio and Florida as peer states for comparison because they are similar to Pennsylvania in population, the number of counties, the percent of counties that are rural, and mean household income.

Of the three states, Pennsylvania is the highest cost state and Ohio is the lowest. A key finding is that rural costs are lower than urban costs in all three states. Also, the housing category is the sector driving the overall cost of living and the urban-rural differential in all three states. The urban-rural housing differential ranged from 16 percent in Florida to 29 percent in Ohio to 33 percent in Pennsylvania, after adjusting for population differences across counties.

Research report available
For a copy of the research report, Analysis of Cost-of-Living Data for Pennsylvania Counties, click here.

Board Approves Research on Spotted Lanternfly, Other Invasive Species

For the nine-month study, Legislative and Regulatory Efforts to Control Invasive Species, Dr. Sara A. Grove of Shippensburg University of Pennsylvania will assess government efforts to control the impact and spread of invasive species. She and her team will identify existing statutes, regulations and funding streams related to the control of invasive species, and will also evaluate the outcomes of the statutory and regulatory practices to control invasive species at the state and federal levels.

To learn more about the challenges and opportunities regarding broadband deployment in rural Pennsylvania, the Center’s board sponsored a public hearing in Wellsboro on April 5. Senate President Pro Tempore Joe Scarnati and Representative Martin Causer joined the Center’s board and Director Barry Denk to hear from broadband service providers and consumers about the issues, challenges, and opportunities of delivering broadband services in rural Pennsylvania.

More and more people are realizing how important broadband access is these days, and how our rural communities are missing out on many opportunities because of their lack of access. I’ve said before that the geography of rural Pennsylvania and the lack of population are issues that affect the availability, access and cost of broadband. But I’ve also said how rural Pennsylvania can serve as a testbed for innovation and unique ways of dealing with the challenges of geography and isolation.

If you would like to watch a video of the hearing or read the submitted testimony, click here. 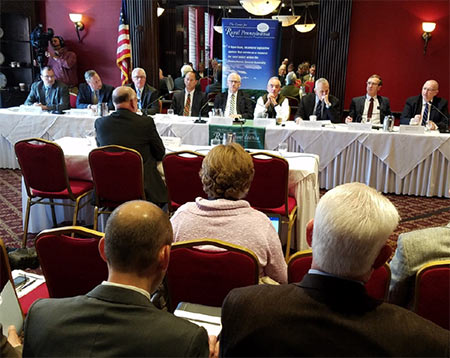 Center board members, staff and guests at a public hearing on rural broadband access and affordability on April 5 at the Penn Wells Hotel, Wellsboro, PA.

Types of Aircraft in Rural Pennsylvania, 2018 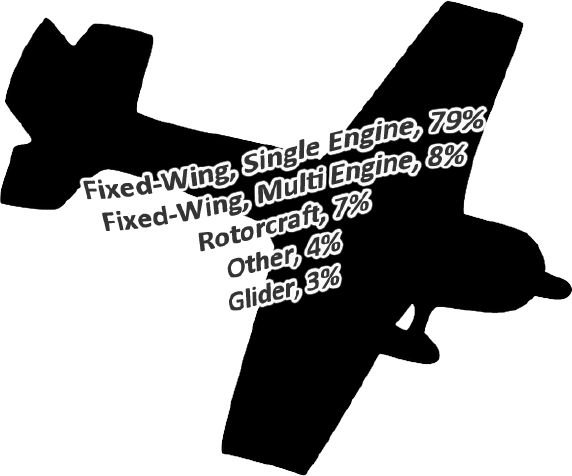 Number & Type of Aviation Facilities in Rural and Urban Pennsylvania, 2018

*Area for airplanes to take-off/land in water (lakes, rivers, etc.) 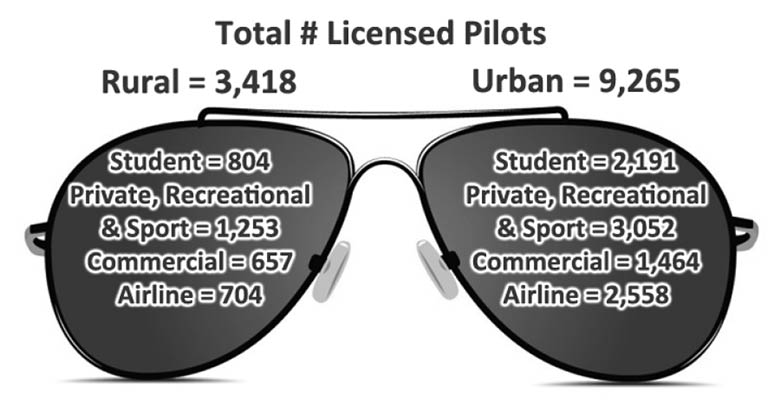 Number of Aircraft Registered in Rural and Urban Pennsylvania, 2018

Airports in Pennsylvania by Type of Runway, 2018 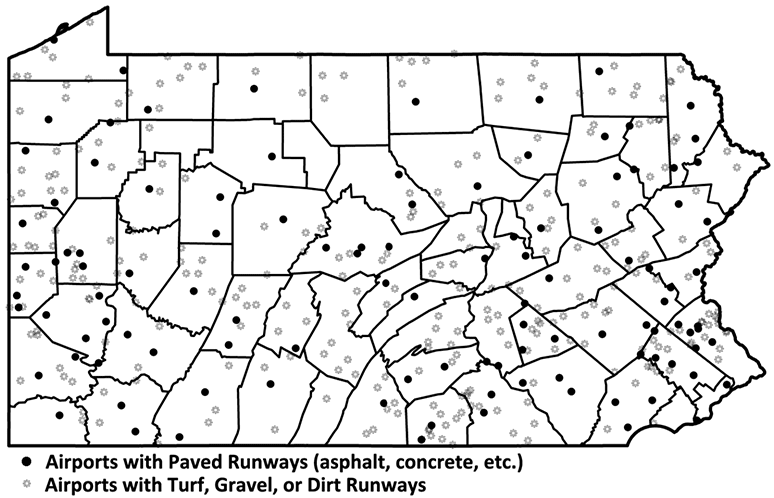 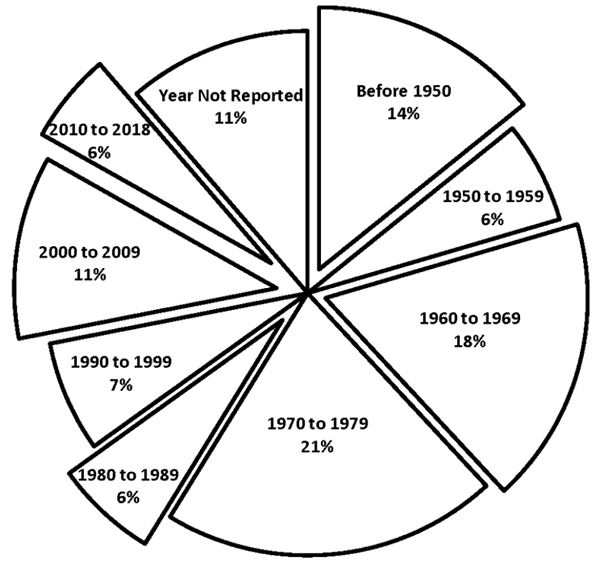 Number of Drones Registered in Rural and Urban Pennsylvania, 2018*

*The Zip Code for six drone owners could not be geocoded as rural or urban.
We got it wrong: this graph was updated to show that the number of registered drones in urban Pennsylvania is 27,300, not 27,301.

Did You Know . . . Pennsylvania's Century and Bicentennial Farm Program

Just the Facts: Adults without a High School Diploma

In 1990, more than 27 percent of adults (age 25+) in rural Pennsylvania did not have a high school diploma or equivalent, according to Census Bureau data. By 2016, the rate dropped 16 percentage points to 11 percent. In urban areas there was a similar decline.

While this decline is remarkable, rural adults still have lower educational attainment levels than urban adults.

To understand the characteristics of the approximately 273,700 rural Pennsylvania adults and 573,300 urban Pennsylvania adults who do not have a high school diploma or equivalent, the Center analyzed data from the 2016 American Community Survey, Public Use Microdata Sample (ACS-PUMS).

The analysis included adults who were 25 years old and older without a high school diploma or equivalent and who were not enrolled in school. People in an institution, such as prison or a nursing home, were excluded from the analysis. Here are the results: