Results from a year-long research project measuring median broadband speeds across Pennsylvania indicate that Federal Communications Commission (FCC) estimates of broadband speeds are not showing the true state of the digital divide in Pennsylvania. According to the FCC’s official broadband maps from December 2017 (updated in May 2019), broadband speeds that exceed 25 megabits per second are 100 percent available across the entire state. However, this new research indicates that there isn’t a single Pennsylvania county where at least 50 percent of the population have broadband connectivity, defined by the FCC as 25 megabits download speed and 3 megabits upload speed.

The results also indicate that connectivity speeds are substantially slower in rural counties than in urban counties.

“Many of us, with just one touch of a finger or click of a mouse, can quickly connect to the world around us,” said Sen. Gene Yaw, chairman of the Center for Rural Pennsylvania’s Board of Directors. “But as this research points out, that’s not always the case for many rural Pennsylvanians.”

The research, Broadband Availability and Access in Rural Pennsylvania, was conducted by Penn State University’s Palmer Chair in Telecommunications Sascha Meinrath and a team of researchers who developed a replicable research methodology that used open source tools for collecting broadband data. Both the tools and the data are publicly available.

Throughout the course of the research, which was sponsored by the Center for Rural Pennsylvania and conducted in 2018, the research team collected more than 11 million broadband speed tests from across Pennsylvania and found that median speeds across most areas of the state did not meet the FCC’s criteria to qualify as a broadband connection.

The research also found that connectivity speeds were much slower in rural counties than in urban counties.

By combining 2018 data with an archive of an additional 15 million broadband speed tests from Pennsylvania residents, the research team identified that, since 2014, the discrepancy between reported broadband availability and the speed test results collected through the research has grown substantially in rural areas. This could indicate a regular and growing overstatement of broadband service in rural communities.

The research notes that Internet Service Providers face several challenges to deploying broadband in rural areas, such as geography, population density, and access to infrastructure. However, the research also highlights options for government, private businesses, and community organizations that want to support the universal availability of broadband throughout Pennsylvania. The research also cites several examples of how private and public entities can work together to deploy broadband more fully.

A copy of the research, Broadband Availability and Access in Rural Pennsylvania, and links to the tools and data used as part of the research are available here.

The research was conducted by Dr. Shailendra Gajanan and Dr. Lisa Fiorentino of the University of Pittsburgh-Bradford. The researchers used data from the Pennsylvania Departments of Education and Health, and the U.S. Census Bureau to compare historical trends in childhood obesity at the school district level with various socio-economic variables, such as education, income, and employment, and various school district variables, such as PSSA scores and participation in the free and reduced school lunch programs. The researchers used the data to identify any relationships between those indicators and obesity rates among Pennsylvania public school students

The percent of overweight students in rural school districts in grades 7-12 also consistently exceeded those in urban districts by at least 4 percentage points. On average, about 21 percent of rural students and 17 percent of urban students in these grades are overweight.

These results indicated that youth obesity is a serious concern in Pennsylvania, particularly among rural students, and rural students in grades 7-12.

Click here for a copy of the research report, Analysis of Obesity Rates for School Children in Pennsylvania.

Almost 15 years have passed since Pennsylvania focused so much attention on broadband deployment. Act 183 of 2004 modified Chapter 30 provisions of the Public Utility Code to spell out how broadband would be deployed throughout the state. Back then, broadband was defined as download speeds of 1.544 megabits per second (Mbps) and upload speeds of 128 kilobits per second (Kbps). That definition remains the benchmark today for Pennsylvania. However, technology has come a long way, as those speeds are no longer considered to be true broadband. Today, the Federal Communications Commission (FCC) defines broadband as a minimum of 25/3 Mbps.

No one can deny the importance of high speed connectivity in today’s global society. And, as we’ve heard over the past few years, many residents in Pennsylvania do not have quality access to broadband and are missing out on economic, educational, health care and recreational opportunities. For example, at the Center-sponsored hearing on broadband access in Wellsboro, Tioga County, in 2018, the board heard from economic development representatives, a public school administrator, health care providers, tourism organizations, and an agri-business owner who talked about the lack of broadband in their areas and its effect on their day-to-day operations. The personal stories and experiences shared by the presenters painted a pretty good picture of the shortfalls in broadband accessibility in many of our rural communities.

The Center’s recent report on broadband access and availability, highlighted on Page 1, provides, in a very visual way, the varying levels of actual connectivity speeds that Pennsylvanians experienced while participating in a broadband test. The maps produced from these tests show that a digital divide in Pennsylvania is real, and that connectivity speeds are substantially slower in our rural counties.

The research clearly acknowledges there are a host of reasons why it has been difficult to deploy higher speed broadband to all of our rural areas. Topography, infrastructure access, population density and even consumer ability to pay all contribute to the current situation. However, the Penn State-led team of researchers point out there are examples where unique partnerships, cooperative initiatives, and support from federal, state and local governments, private businesses, and nonprofits are working to bring universal, high-quality broadband to all Pennsylvanians.

As with the diversity of Pennsylvania €“ being a complex blend of urban and rural €“ there is no single solution, no one way to address the challenge of quality, high-speed broadband connectivity. Innovation and entrepreneurship from both the public and private sectors are key to taking that challenge and making it an opportunity. The Center for Rural Pennsylvania will continue its efforts to support that process by providing quality research findings on matters that are important to Pennsylvania.

Percent Change in the Number of Pennsylvania Farms, by County, 2012 to 2017 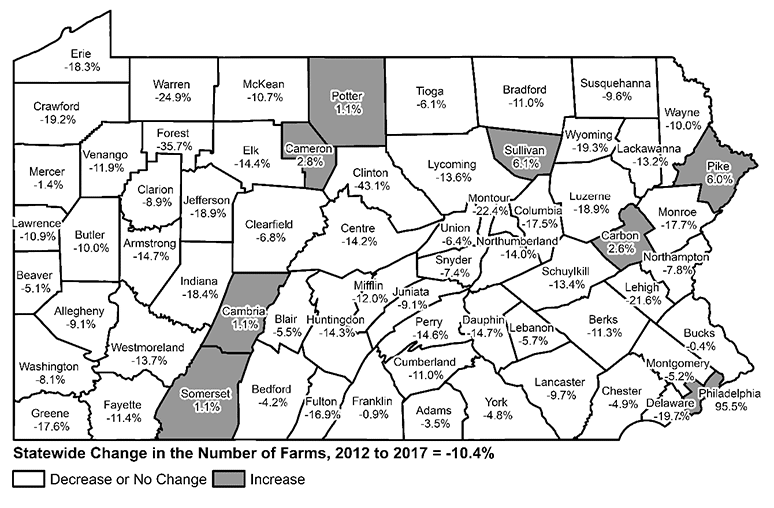 Percent Change in the Number of Acres of Pennsylvania Farmland, by County, 2012 to 2017 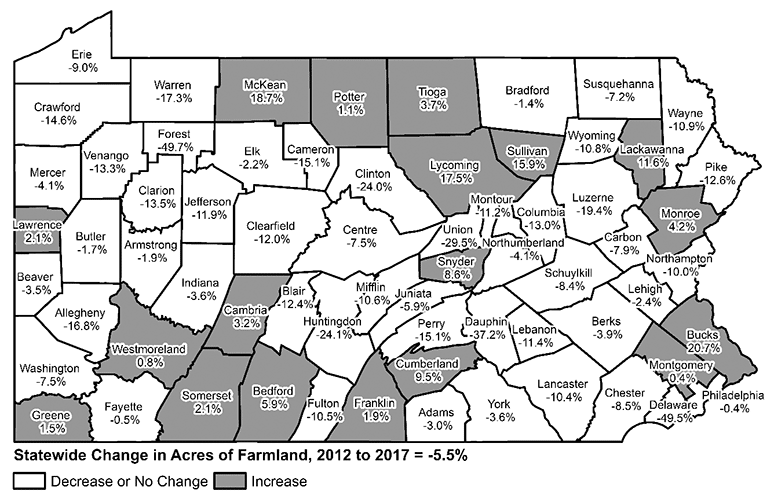 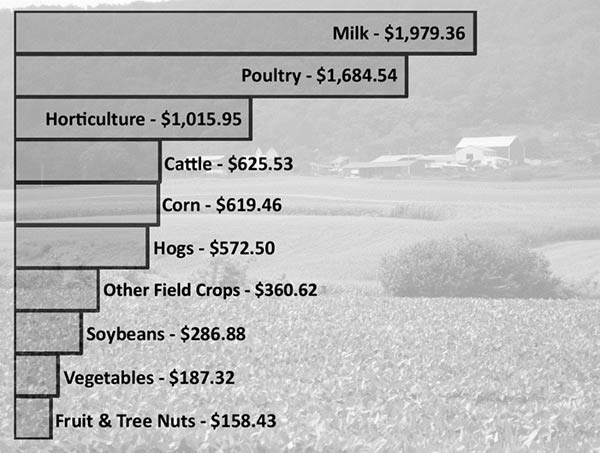 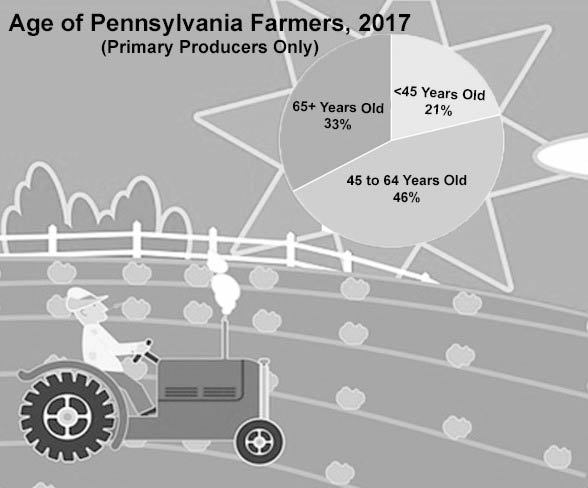 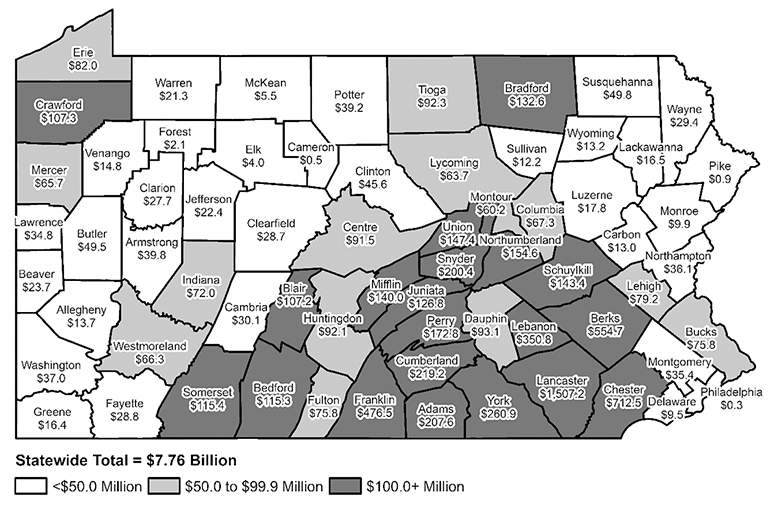 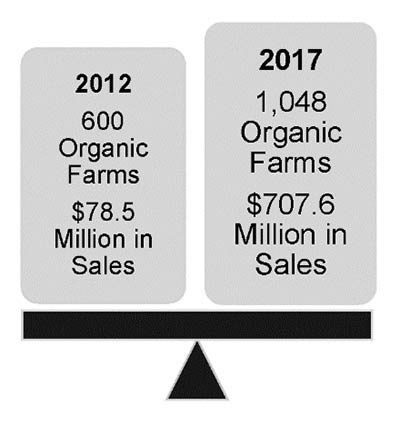 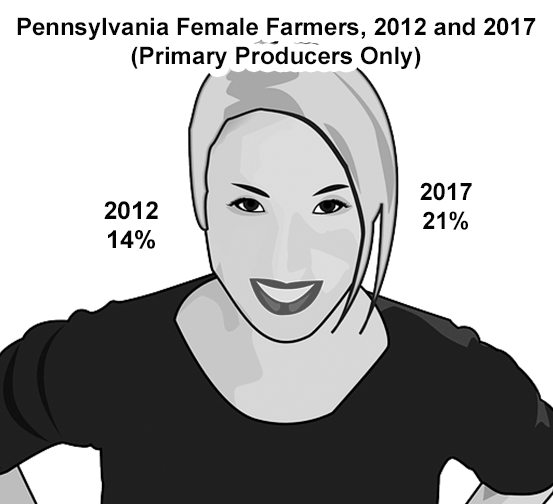 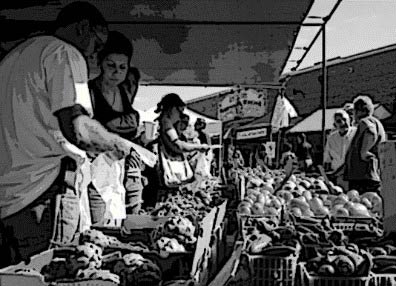 In 2017, 6,403 farmers participated in farmers' markets, roadside stands, CSAs, or other similar direct sales to consumers. These activities generated more than $173.8 million in sales.

Once a decade, every resident in the U.S. is asked to take part in the U.S. Census. The decennial census, which is mandated by the U.S Constitution, counts our nation’s population and households.
Here are 15 ways that Census data are used and how that data affect you and your community.

Penn State University is leading the research efforts currently underway to answer many questions about the insect’s biology, and the ability of the insect to adapt to the environment in Pennsylvania. USDA and the department are actively treating locations where SLF has been reported.

The department is also surveying all counties in the state outside of the quarantine looking for SLF.

To determine if your business or organization is required to carry permits, visit Penn State Extension at https://extension.psu.edu/spotted-lanternfly-permit-training.

The department is also encouraging all communities and homeowners to help contain the spread of this invasive pest. For more information, visit the department’s website at https://www.agriculture.pa.gov/Plants_Land_Water/PlantIndustry/Entomology/spotted_lanternfly/Pages/default.aspx, and Penn State Extension’s website at https://extension.psu.edu/spotted-lanternfly-management-for-homeowners.

On issues facing the municipality, both female and male officials were on the same page. There were, however, some differences. Males ranked streets and highway, and taxes and spending higher than females, while females ranked recreation, and economic development higher than males.

Click here for a copy of the fact sheet, 2018 Survey of Small Town Municipal Officials.