Pennsylvania counties and municipalities with unconventional natural gas wells received more than $313 million in impact fees from 2012 to 2014 because of the passage of the Unconventional Gas Well Impact Fee Act (Act 13 of 2012).

Research sponsored by the Center for Rural Pennsylvania found that counties and municipalities have allocated the majority of these funds for capital reserve, emergency preparedness and public safety, and public infrastructure. The research, conducted by Dr. Shailendra Gajanan and Dr. Stephen Robar of the University of Pittsburgh-Bradford, noted that the use of impact fee resources were consistent with the general governmental functions of both county and municipal governments.

Research background
The research, conducted in 2015, reviewed Act 13 monies allocated for 2012, 2013 and 2014 (for production years 2011, 2012 and 2013) to describe the overall disbursements to counties and municipalities and to analyze their spending/allocation priorities. The research also identified trends and significant patterns in county and municipal expenditures as a result of Marcellus natural gas activity and Act 13 funding.

The researchers used secondary data from the Pennsylvania Public Utility Commission (PUC) on Act 13 impact fee distributions and self-reported usage report data, as well as county and municipal financial data from the Pennsylvania Department of Community and Economic Development (DCED). To augment the secondary data, the researchers also surveyed counties and municipalities.

All Pennsylvania counties received Marcellus Legacy funds, which are to support environmental, highway, water and sewer projects, rehabilitation of greenways and other projects throughout the state. The total statewide Legacy allocation for 2011-2013 was more than $33.9 million, with more than $11.7 million going to the 37 Marcellus counties, and $22.2 million going to the state’s 30 remaining counties.

The research noted that county allocations of impact fee resources were consistent with the general governmental functions of county government. Also, Legacy funds were being used for a variety of development projects ranging from conservation to farmland preservation.

The municipal survey results indicated that the top three priorities for impact fee monies were public infrastructure construction, emergency preparedness and public safety, and storm water and sewer systems. Given that road and infrastructure maintenance is a central function of municipal governments, the study concluded that allocation trends were consistent with municipal functions.

For a copy of the research report, Analysis of Act 13 Spending by Pennsylvania Municipalities and Counties, visit www.rural.palegislature.us.

The Pennsylvania Public Utility Commission announced in June that counties and municipalities with unconventional natural gas wells would receive a total of more than $95.2 million in 2015 impact fees. Marcellus Legacy disbursements, which are distributed to all counties, totaled more than $10.1 million for 2015. These monies are collected and disbursed as mandated by Act 13 of 2012, the Unconventional Gas Well Impact Fee Act.

From the article on Page 1, which describes the results of research on Act 13 spending among local governments, we can expect our counties and municipalities to allocate these disbursements in a variety of essential areas, the most likely of which are emergency preparedness and public safety, public infrastructure, capital reserves, storm water and sewer systems, and environmental programs.

The research on Act 13 spending, which was sponsored by the Center, is perhaps the most comprehensive review, to date, on how Pennsylvania counties and municipalities have been using the impact fee monies, and how important these fees are to local governments with unconventional gas wells in their areas. The research results are available on the Center’s website at www.rural.palegislature.us.

On June 2, the Center held its 10th public hearing on the heroin/opioid epidemic in Hopewell Township, Beaver County. The hearing was attended by more than 55 people, and the 17 testifiers were from the fields of health care, law enforcement, education, and treatment.

In terms of treatment, some of the testimony was specific to the treatment of pregnant women with addiction and babies born with addiction. Several school superintendents who testified told us what their school districts are doing to combat the epidemic and about the adoption of progressive school policies on carrying and using naloxone on school property. The district attorneys from Beaver, Lawrence and Washington counties told us how they were cooperating with local and state law enforcement to target dealers and that legislation allowing them to prosecute drug delivery resulting in serious bodily injury is essential.

When the Center’s hearings began two years ago, we hoped to raise awareness about this public health crisis and to learn how communities are responding. I believe we have accomplished that, but we know there is still much to do. My colleagues in the General Assembly have passed important legislation to address different aspects of the epidemic, and recently have introduced legislation that gets to the epidemic on even more levels. I am confident that we will continue working together to fight this crisis. 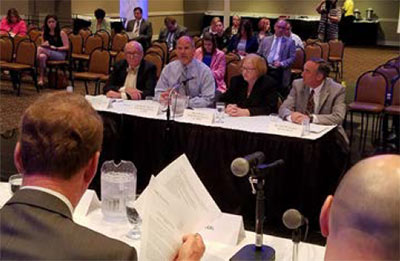 Over the past 3 years, the Center has held the hearings to raise awareness of the heroin/opioid crisis, and to bring law enforcement, treatment and health care professionals, community advocates, educators, local government officials and families together to learn more about the crisis and what is being done to confront the epidemic.

Since 2014, the Pennsylvania General Assembly passed the following legislation: Act 80, which established a non-narcotic medication assisted treatment pilot program within the Department of Corrections; Act 139, which provided legal protections for witnesses, or Good Samaritans, seeking medical help at the scene of an overdose, and allowed naloxone, a synthetic drug that blocks opiate receptors in the nervous system, to be prescribed to a third party; and Act 191, which expanded the types of drugs monitored under the state’s existing Prescription Drug Monitoring Program.

Most recently, legislation sponsored by Center Board Chairman Sen. Gene Yaw and Board Vice Chairman Sen. John Wozniak passed the Senate on June 15 and was on its way to the House of Representatives for consideration. The legislation would require licensed prescribers to undergo periodic education on pain management and opioid prescribing guidelines to help control the abuse of painkillers and heroin.

Several other pieces of legislation, addressing treatment, prevention and reporting of overdoses, have also been introduced in the State House of Representatives and Senate.

Sen. Yaw said: “We are hopeful that collaborative efforts by state and local governments, health care, law enforcement, educators and the public will help to decrease the rise in opioid abuse and increase the opportunities for successful treatment and effective prevention measures.”

Background
This snapshot looks at rural and urban Pennsylvania local parks, which are defined as any municipal-, county-, or nonprofit-owned park or recreational area/facility. Local parks, which also include natural areas, are publicly accessible and/or publicly owned and engage participants of all ages in outdoor recreational experiences. Excluded from this analysis were state parks, federal parks, state forests, national forests, parks on school grounds, and linear parks, such as rails-to-trials. Data are from the Pennsylvania Department of Conservation and Natural Resources unless noted otherwise. 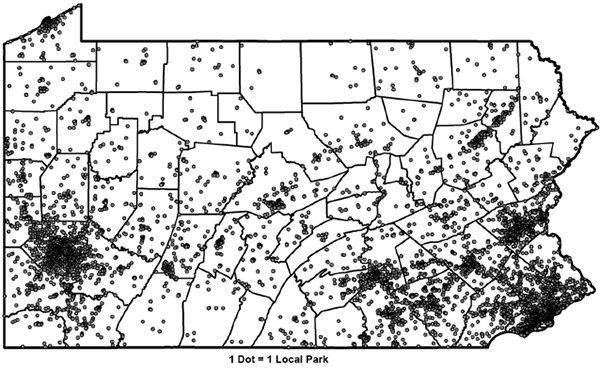 Percent of Rural and Urban Residents Living within 1 Mile of a Local Park, 2010 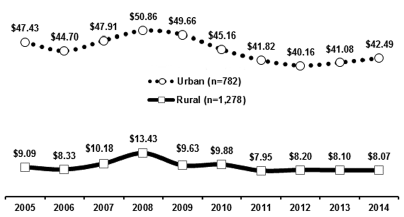 Data source: Governor's Center for Local Government Services. Data only include those municipalities that reported expenditures each year from 2005 to 2014. Data adjusted for inflation using the CPI-U with 2014 = 100. 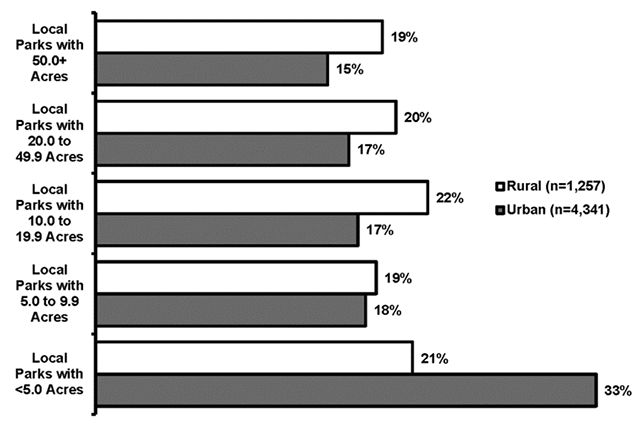 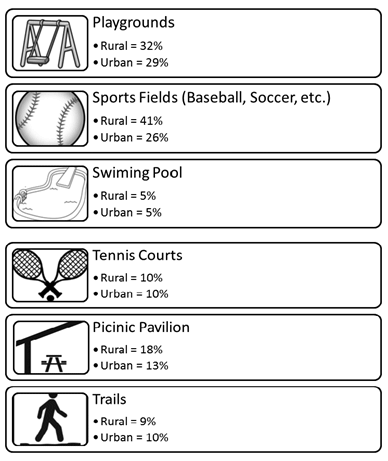 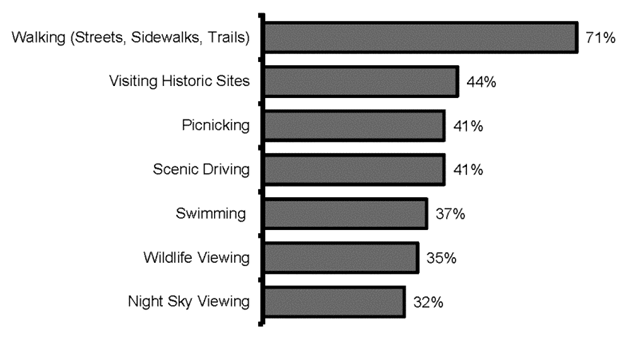 Changes in Business Establishments and Employment 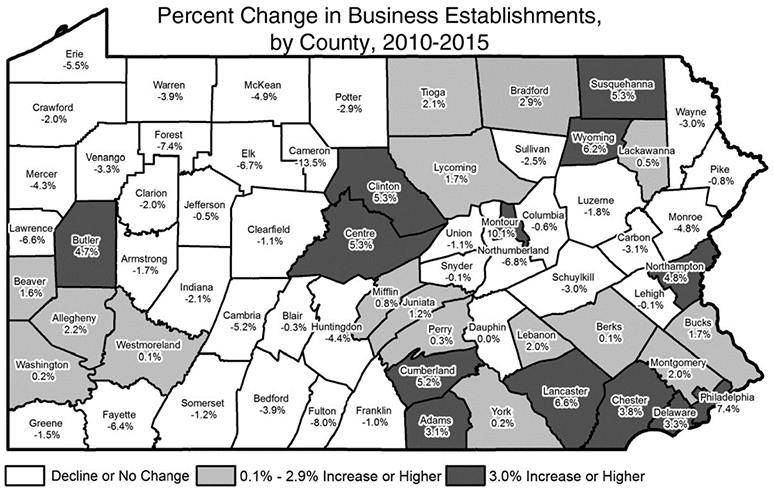 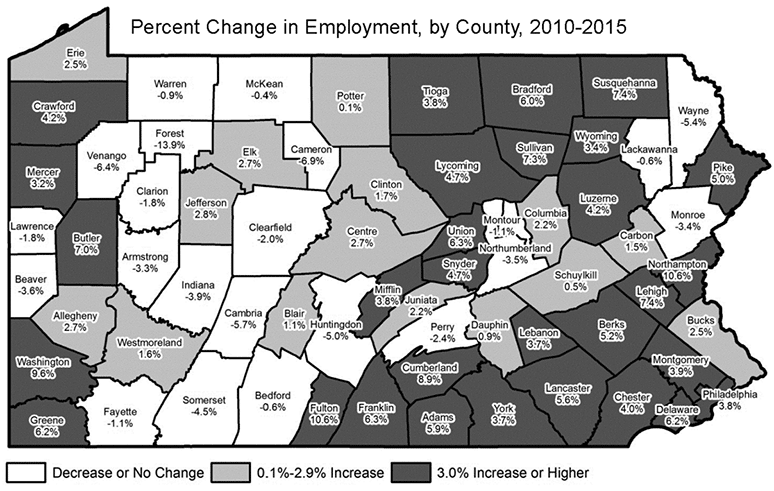 The Pennsylvania Human Relations Commission (PHRC) tracks the number of discrimination court cases by county and type. These cases involve discrimination as defined in state statutes.

The counties with the highest number of discrimination cases per 100,000 residents were Cumberland (29.9), Fulton (34.2) and Dauphin (68.5). The five rural counties of Armstrong, Forest, Sullivan, Susquehanna, and Wyoming had no cases filed in 2013-14.

From 2009-10 to 2013-14, the number of discrimination cases in rural and urban Pennsylvania declined significantly: 62 percent in rural counties and 66 percent in urban counties.

At the federal level, the U.S. Equal Employment Opportunity Commission (EEOC) is responsible for enforcing federal discrimination laws. According to its records, there were 88,484 discrimination charges filed nationwide in 2014, or 27.7 cases per 100,000 residents. 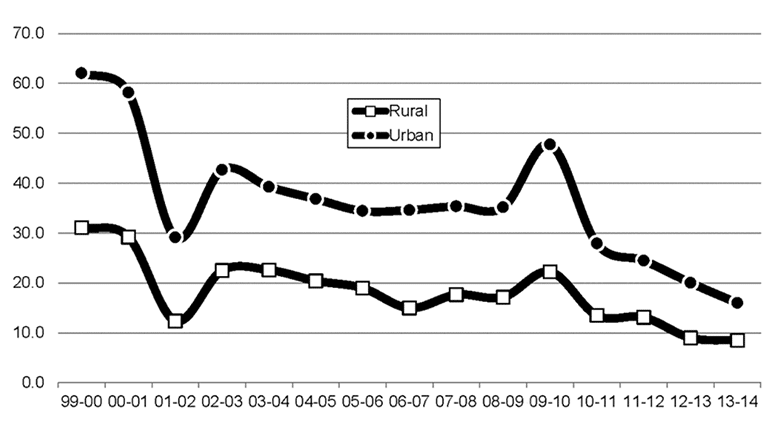