The research, Economic Outlook for Rural Pennsylvania Over the Next 10 Years, indicated that employment in this sector is projected to grow three times as fast as the average growth of total employment for both the U.S. and Pennsylvania.

The research indicated that employment in Pennsylvania’s healthcare and social assistance industry is projected to increase by 175,880 new jobs. Other industries with large projected increases in employment over the study period are professional and technical services (52,290 jobs), administrative and waste services (48,670 jobs), construction (43,110 jobs), and accommodation and food services (33,630 jobs).

Researchers Todd Behr, Dr. Constantinos Christofides, and Dr. Pattabiraman Neelakantan, of East Stroudsburg University, conducted the study in 2015 and 2016 using projections from the U.S. Bureau of Labor Statistics and the Pennsylvania Department of Labor and Industry’s Center for Workforce Information and Analysis. The research ranked industries according to the greatest growth in jobs and percentage growth in jobs over the decade (2012-2022) for the nation, the state, and the state’s 22 Workforce Investment Areas.

According to the research, there are some differences in the growth industries in rural and urban Pennsylvania. For example, healthcare, construction, and accommodation and food services are projected to grow rapidly in both rural and urban counties. However, administrative and waste services are projected to grow in urban counties but not rural counties since the markets for those services are in densely populated areas. Employment in transportation and warehousing is projected to grow faster in rural but not urban areas because the industry requires more spacious environments for truck traffic and the construction of warehouses.

Food preparation and serving-related occupations are projected to grow significantly statewide as the leisure and hospitality industry grows.

Click here for a copy of the report, Economic Outlook for Rural Pennsylvania Over the Next 10 Years.

I am always fascinated with the data the Center for Rural Pennsylvania maintains on our 67 counties and state as a whole. Here is one bit of information that may surprise some: Pennsylvania has the fifth largest population of people age 65 years old and older in the nation. Not surprisingly, many of our older residents tend to require the services of the healthcare industry.

In a recent study sponsored by the Center, the researchers estimated that the healthcare and social assistance industry is expected to experience the largest gains in employment in the coming years. That research, which is featured on Page 1, estimated that jobs in the healthcare industry will increase by more than 175,000 in Pennsylvania over the next 10 years.

The research also estimated large projected increases in employment in the professional and technical services, administrative and waste services, construction, and accommodation and food services industries.

The research indicated that occupations in support of the healthcare industry, such as healthcare practitioners, healthcare support, and personal care and service, will probably grow as well.

If you’ve been following the news on the heroin/opioid epidemic that is affecting Pennsylvania and the nation, we have more information to share about public opinion on the crisis on Page 3. The Center included two questions on the heroin/opioid epidemic in the most recent Penn State Poll to find out resident attitudes on the main causes of the crisis and state government’s role in addressing it.

While the respondents did not zero in on one main cause of the epidemic, they did indicate that state government has a role in addressing the crisis.

I know that state government, including the Center for Rural Pennsylvania, has been very active in raising awareness of this epidemic. The General Assembly has also been working on a variety of legislation to address various aspects of the crisis, including prevention and education, law enforcement, and treatment. This epidemic did not happen overnight, and it is not going to be fixed anytime soon. However, I’m confident that Pennsylvania will continue to take positive steps forward in addressing all aspects of this crisis.

Pennsylvania residents believe that individuals making bad personal decisions and the overprescribing of addictive medications are the main causes of Pennsylvania’s heroin/opioid crisis. That's according to results from the Spring 2017 Penn State Poll conducted by the Center for Survey Research at Penn State-Harrisburg.

The Center for Rural Pennsylvania contracted with the center to include two questions in its Spring 2017 poll. The questions in the poll asked adult respondents (age 18 and older) to identify the main causes of the heroin/opioid crisis and the role of state government in addressing it.

A total of 609 respondents completed the survey and the margin of error is plus or minus 4.0 percentage points.

The bottom line
While there was no consensus on the cause of the heroin/opioid crisis, there was solid agreement that state government has a role in addressing it.

Click here for a copy of the fact sheet, Pennsylvania’s Heroin/Opioid Crisis: Resident Attitudes and the Role of State Government.

A Note on the Safe Schools Act

The Safe Schools Act of 1995 (Act 26) established the Office for Safe Schools in the Pennsylvania Department of Education (PDE) and authorized PDE “to coordinate anti-violence efforts between school, professional, parental, governmental, law enforcement and community organizations and associations.”

Act 26 was amended in 1997 (Act 30) to mandate annual reporting of all incidents of violence, weapons, alcohol, drugs and tobacco possession to PDE. Another amendment to Act 26 (Act 104 of 2010) clarifies the requirements around reporting school violence incidents, mandates the creation of a statewide school safety advisory committee and establishes requirements for dating violence prevention policies and programs. 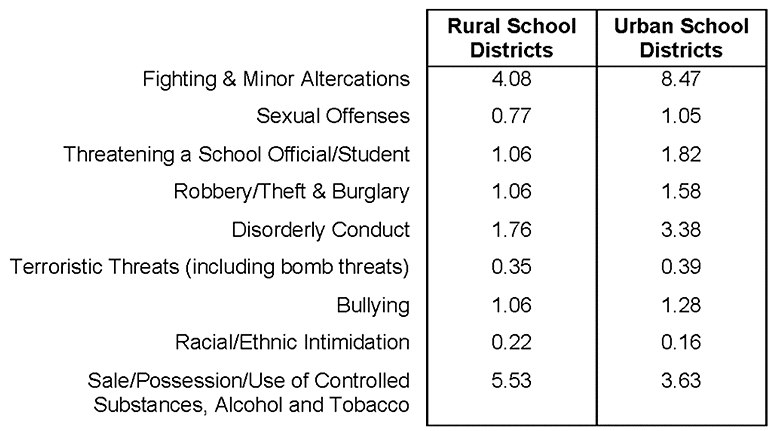 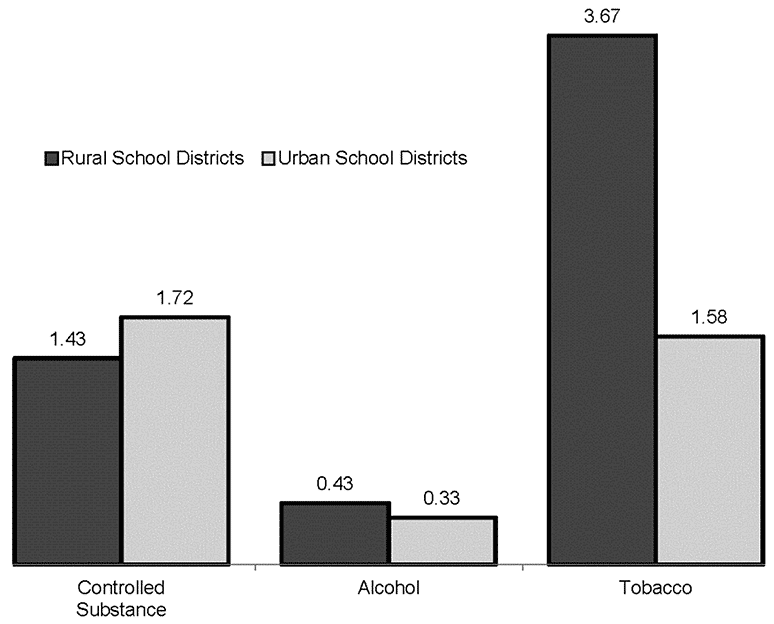 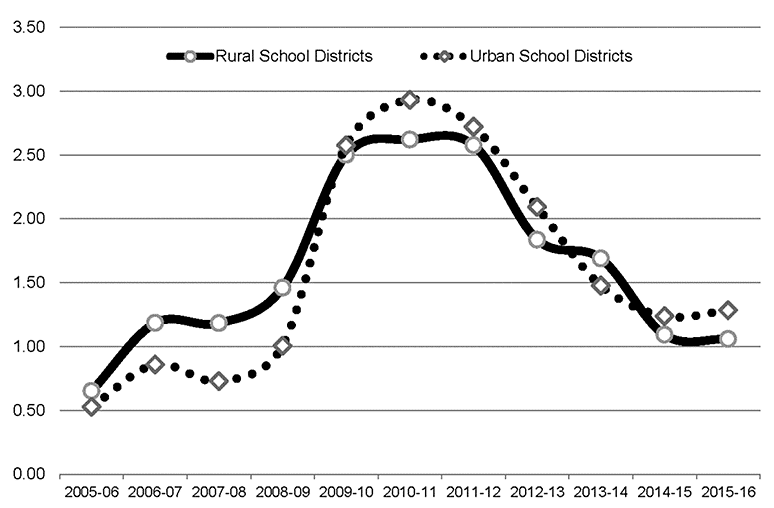 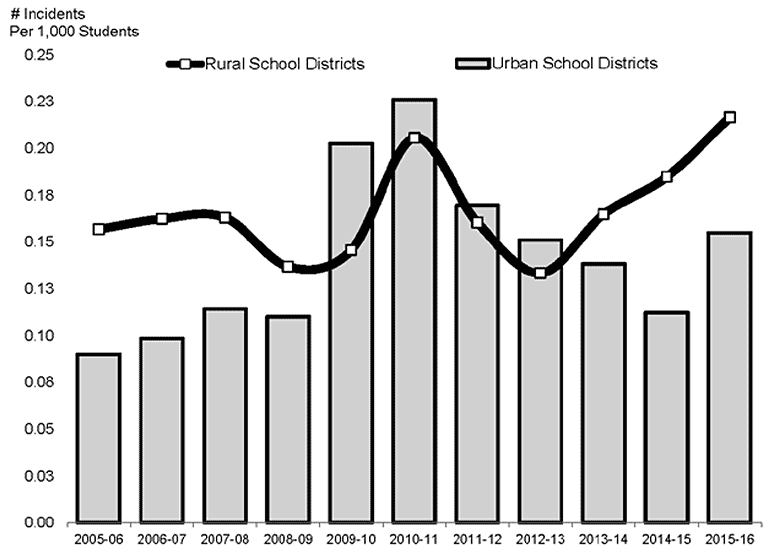 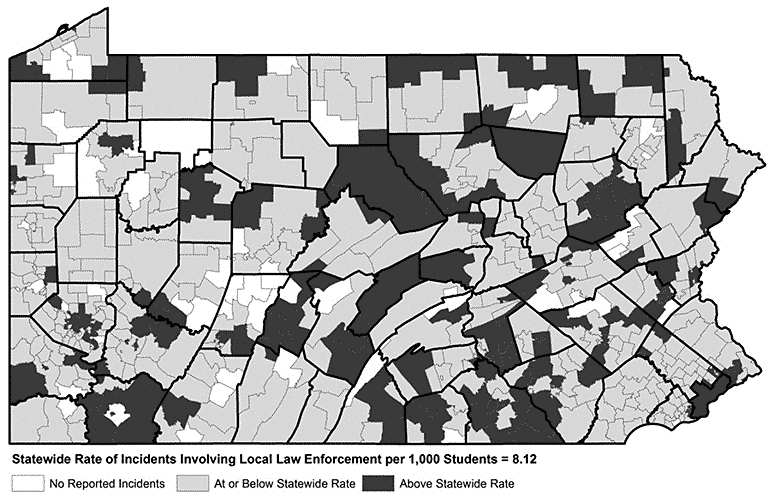 In June, the Center for Rural Pennsylvania released an analysis of Pennsylvania State Police coverage in rural and urban municipalities.

According to the analysis:

Click here for a copy of the fact sheet, Pennsylvania State Police Coverage in Rural and Urban Pennsylvania Municipalities.

Rural and Urban Municipalities by Type of Police Coverage 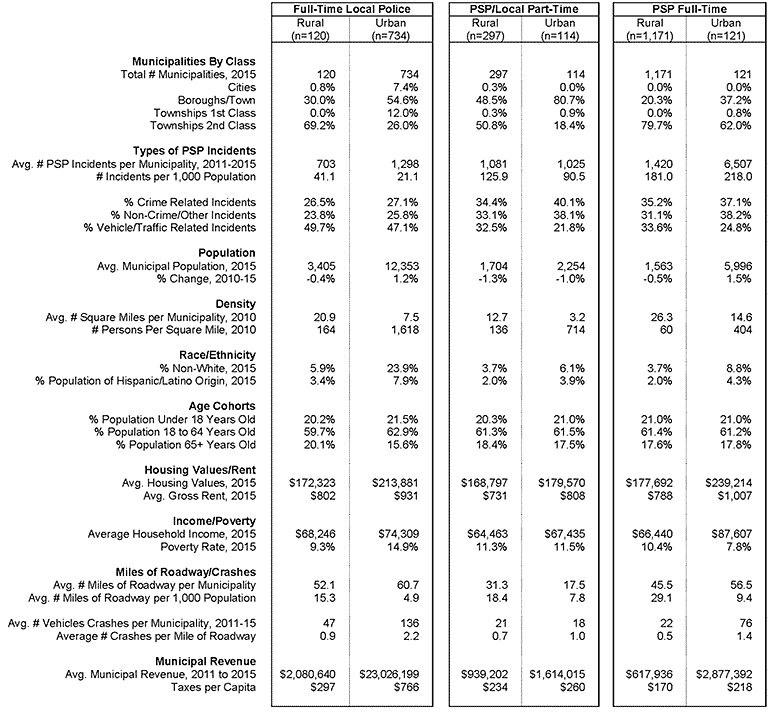 In 2015, 28 percent of rural and 32 percent of urban Social Security dependent households were in poverty.  The poverty threshold in 2015 for a single person was $12,082.