Invasive species, like the spotted lanternfly and brown marmorated stinkbug, can wreak havoc on Pennsylvania’s environment and its economy. Unfortunately, government efforts to control invasive species, both nationwide and in Pennsylvania, can be described as slow and reactive, according to recent research by Dr. Sara Grove and Dr. Michael Moltz of Shippensburg University of Pennsylvania.

In their research to better understand government approaches to dealing with threats from invasive species, the researchers found that, nationwide, about 50 percent of the efforts to address invasive species were related to control, often of specific insects, plants, or aquatic life. Nine percent of the statutes and regulations were focused on prevention, and only 4 percent emphasized eradication. Roughly 18 percent of the efforts had mixed goals (typically, control and prevention) and another 18 percent were classified as other. This last category included the development of administrative structures, including state invasive species councils.

The research was sponsored by the Center for Rural Pennsylvania.

The researchers contacted states with invasive species programs that related to threats in Pennsylvania, and asked for information on funding sources devoted to controlling invasive species and any research reports on the effectiveness of the programs.

Research findings
Overall, the research found that Pennsylvania’s efforts to control invasive species are reactive, with the Pennsylvania Invasive Species Council being created only in 2004, and with the first comprehensive species management plan implemented before the end of the Rendell administration. The council entered a dormant period during the Corbett administration and was only reinvigorated by Governor Wolf in 2017. Furthermore, Pennsylvania has no dedicated funding streams for addressing outbreaks of invasive species. Rather, when threats arise from invasive species, departments use general fund monies or rely on grants from the federal government until the next budget cycle.

The four policy case studies showed the benefits of interagency cooperation and interstate coordination. They indicated that management expertise and funding are critical because invasive species do not respect agency or state boundaries. To be effective, efforts to control and prevent the spread of invasive species require a holistic approach.

When reviewing reports from federal and state agencies involved in controlling the spread of invasive species, the researchers noted a common theme €“ namely, inadequate funding. The research found that the federal government provides funding primarily through programs under the U.S. Department of Agriculture, typically those associated with the Farm Bill and directly linked to invasive species that threaten agriculture. Funding to address invasive aquatic species comes from the U.S. Fish and Wildlife Service. Furthermore, federal agency efforts rely on cooperation with their state counterparts.

The research found that states use a variety of funding mechanisms to support efforts to detect, suppress, and eradicate invasive species.

Policy considerations
Based on the evaluation of existing state statutes and regulations, as well as the four case studies, the researchers identified several policy considerations: one of which is to provide institutional support and dedicated funding for the Governor’s Invasive Species Council, including a statewide invasive species coordinator.

Full report available
Click here for a copy of the full report, Legislative and Regulatory Efforts to Control Invasive Species.

Across the nation, invasive species have been taking their toll on wildlife, waterways, agricultural productivity, tourism, outdoor recreation and more. These invaders also have been costing billions of dollars in damages over the years. A report by the U.S. Fish and Wildlife Service noted that the U.S. spends more than $120 billion on invasive species each year.

From the gypsy moth to the zebra mussel, Pennsylvania is no stranger to the damage invasive species can cause and the impact they can have on our environment, our economy and even our health. The latest threat to Pennsylvania is the spotted lanternfly. Currently, there is a quarantine zone that covers 14 counties in Pennsylvania, including Berks, Bucks, Carbon, Chester, Dauphin, Delaware, Lancaster, Lebanon, Lehigh, Monroe, Montgomery, Northampton, Philadelphia, and Schuylkill counties. The Pennsylvania Department of Agriculture and Penn State University and Extension have come together to control and contain the spread of spotted lanternfly (SLF). The department is regulating the movement of commodities that may be moving within or leaving the quarantine zone, and it is restricting the movement of articles that contain any life stages of SLF, including egg masses, nymphs, and adults. Businesses operating in the quarantine zone must have permits to move equipment and goods within and out of the zone. To learn if your business or organization is required to carry permits, visit Penn State Extension by clicking here. Following the quarantine requirements will help to contain the spread of this pest.

The Center’s board was well aware of this latest threat to Pennsylvania, and in 2018, it supported research to document what Pennsylvania and other states are doing to control and prevent invasive species. The research, conducted by Shippensburg University’s Dr. Sara Grove and Dr. Michael Moltz, found that there are no uniform approaches to controlling, preventing or eradicating invasive species nationwide. However, the research case studies indicated that there are benefits to interagency cooperation and interstate coordination, and noted the importance of the Governor’s Invasive Species Council. The council is chaired by the Secretary of Agriculture and includes members from state agencies and the public who represent agriculture and natural resource organizations and educational institutions conducting invasive species research and outreach. The results of that research are featured on Page 1.

In the coming months, we will share the results of research on the economic impact of SLF on Pennsylvania agriculture and forests. We trust that the information from these two projects will help Pennsylvania move forward in its efforts to prevent and control invasive species.

The ag purchase program is dedicated to slowing the loss of prime farmland to non-agricultural uses. Funding allows state, county and local governments to purchase conservation easements from owners of quality farmland. State, county, local, and federal funds are allocated to county programs to purchase the development rights to preserve farms on county waiting lists.

This Snapshot looks at the female/male pay gap. The data do not take into account years of service or job title. Full-time, year-round workers are employed 35+ hours per week and 50+ weeks per year. 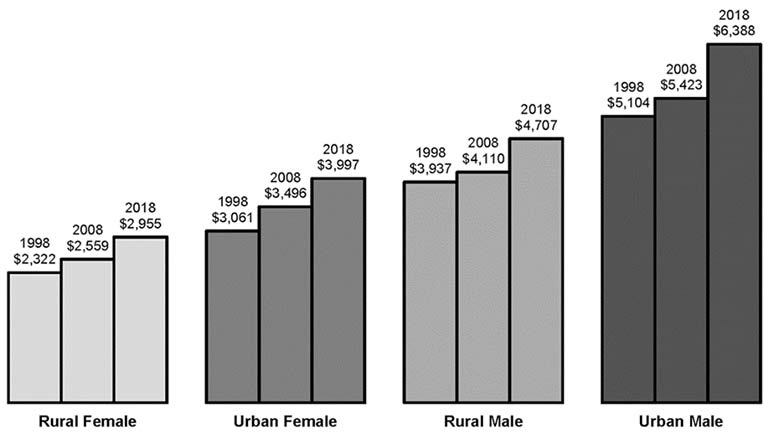 Median Income for Rural Pennsylvania Workers Who are Employed Full-time and Year-Round, by Gender and Other Characteristics, 2017 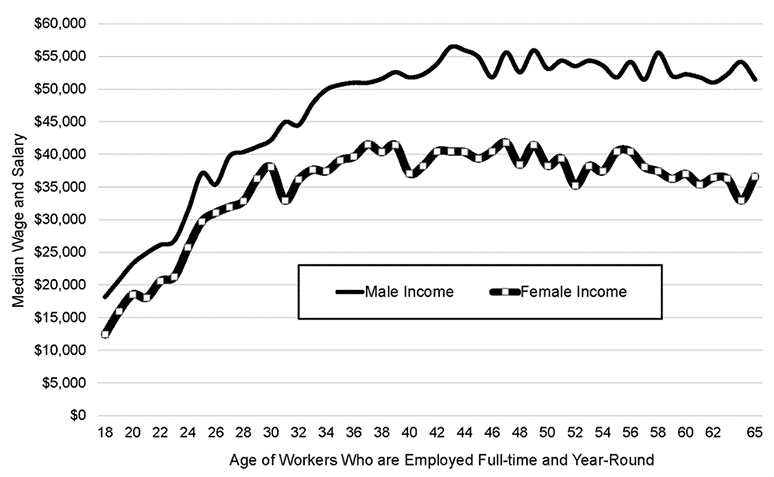 Percentage of Female Pay to Male Pay, by County, 2017 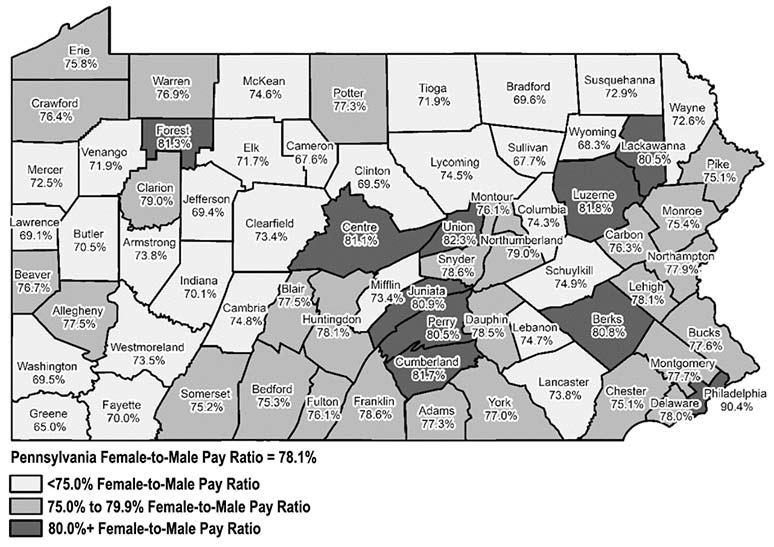 It's Electric: Vehicles and Charging Stations

According to the most current estimates from the U.S. Department of Energy, in 2017, there were 366,940 electric vehicles on the road. Nearly one-half of these vehicles (49 percent) were registered in California.

EVs captured less than 1 percent of new vehicle sales in 2017, according to the Alliance of Automobile Manufacturers, and only increased their share of the road by less than 1 percent from 2013 to 2017. While EVs do not appear to be gaining much traction presently, advancements in technology and/or new policies may change that outlook in the future. As clean energy options continue to be explored, it may be less a question of if EVs will dominate the market, and more a matter of when.

Number of Registered Electric Vehicles in Pennsylvania, by County, 2018 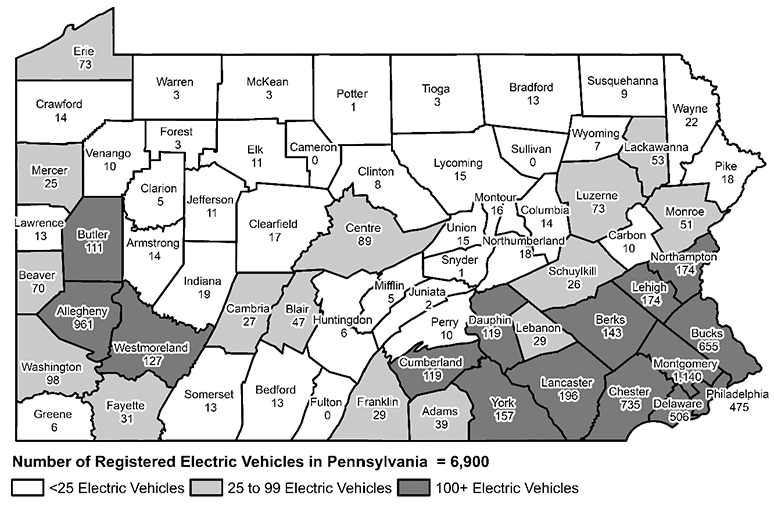 Just the Facts: Take Cover! It's a Tornado

When are these twisters striking? Forty-four percent of tornadoes occurred in the early summer months of June and July, and more than 63 percent of them touched down between 12 p.m. and 6 p.m.

The Food and Nutrition Service's Office of Community Food Systems has announced the launch of the third Farm to School Census in September.

The Farm to School Census (the Census) is the only national survey that examines school districts’ farm to school activities, such as local food purchasing behaviors, the number and use of school gardens, and the frequency of agricultural education. The Census surveys all School Food Authorities participating in the USDA National School Lunch Program in all 50 states and U.S. territories.

The USDA Food and Nutrition Service has contracted with the research firm Abt Associates to administer the 2019 Farm to School Census. Abt will start contacting state agencies and school districts later this summer.

The Census is a valuable measure of the effectiveness, scope, and reach of farm to school activities, nationwide, over time. It’s important to participate in the Census, regardless of your school's current level of farm to school participation. Click here for more information.