Pennsylvania’s Employment First Act, signed into law in June 2018, requires some important changes in employment supports for people with disabilities. It requires state, county, and other entities receiving public funds to first consider competitive integrated employment for individuals with a disability who are eligible to work under state law.

The results of recent research conducted by faculty of Indiana University of Pennsylvania and sponsored by the Center for Rural Pennsylvania could offer important information to state agencies that are working to implement the provisions of Employment First.

The research, conducted in 2017 and 2018 by Dr. Susan Boser, Dr. Brandon Vick, Dr. Alex Heckert, and Dr. David Yerger, identified the opportunities for competitive employment for individuals with a disability; analyzed the barriers for obtaining such employment, with a focus on rural barriers; and identified the strategies other states are using successfully. The research used secondary data from the U.S. Department of Labor and the Census Bureau. The researchers surveyed service providers, conducted focus groups with families of individuals with disabilities and with service providers, and interviewed individuals representing various stakeholder groups at the regional, state and national levels.

The qualitative analysis uncovered a number of time and benefit gaps that may delay employment. These include the time it takes to access job-related supports when moving to employment and the reinstatement of benefits when coming out of employment. The length of such gaps and the complicated processes related to benefits and employment serve as a disincentive for families, many of whom support the idea of competitive, integrated employment in principle, but feel that the potential risks are too high to pursue.

The research identified three additional barriers. First was the transportation system available for persons with disabilities in rural areas. These systems are designed for congregate care settings, and currently are not able to accommodate the needs of individuals seeking competitive, community-based employment. Second, the structure of the rate system for providers is not well-aligned to support competitive employment goals, particularly the rates to hire, train and maintain professional staff in the necessary employment and benefits services. Third, state agencies maintain separate data management systems that do not permit cross-system access to data, system queries, and data management integration. Each limitation inhibits access to information on program effectiveness and the ability to monitor outcomes.

The researchers offer several policy considerations including: increasing the flexibility of regulations; aligning funding rates with the goals of employment, and ensuring that provider agencies receive adequate funding for professional staff with the appropriate training; developing a transportation system, similar to the system created for medical appointments, to meet the flexible transportation needs for community-based employment; and setting employment goals for employment rates of individuals with disabilities that reflect the variations in the availability of jobs and the competition for those jobs in rural areas.

Report available
Click here for a copy of the report, Employment Opportunities for Rural Residents with Disabilities in Pennsylvania.

To gather more information on medication assisted treatment services, county drug courts, and reemployment opportunities for people battling addiction to heroin and opioids, the Center for Rural Pennsylvania held a public hearing in Ebensburg on August 15.

“From our previous hearings, the Center learned how difficult it is for people with a substance use disorder to get back to work,” said Senator Gene Yaw, board chairman. “We also heard about the many treatment options for individuals that can help them in recovery. At this hearing, we wanted to learn more about the local programs that help with reemployment, the success of county drug courts, and the treatment programs that help people recover from their addiction and be successful in their recovery.” 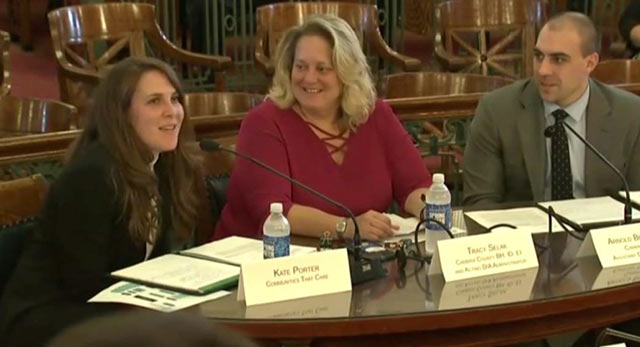 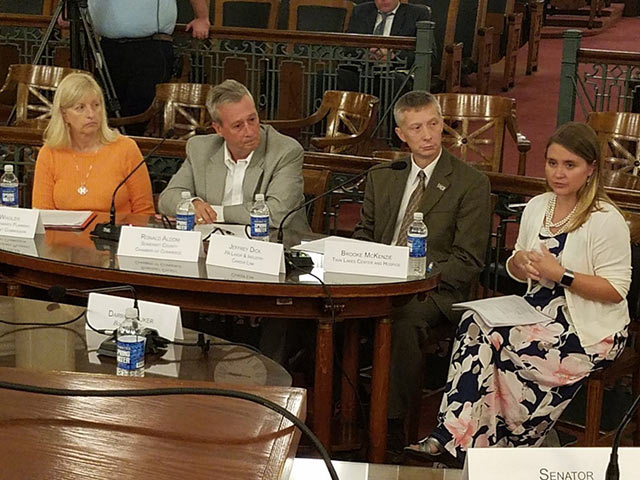 In August, the Center’s board held its 14th public hearing on the heroin/opioid epidemic to learn more about medication assisted treatment options, the work of county drug treatment courts, and county-wide efforts to support reemployment of people in recovery.

Each of our hearings has helped us to better understand a host of issues that not only affect people battling addiction but also families, communities, law enforcement, social services, the judiciary, health care, our workforce, and so much more.

This latest hearing helped to reinforce the importance of medication assisted treatment options, with medications like vivitrol, and the significant work of county drug treatment courts to help people with addiction get back on track in their home and work lives while continuing to work on their recovery. We also heard about the critical work of Single County Authorities, engaged community members, law enforcement, state agencies and the treatment community in developing wrap-around services and reemployment options that can help people work toward recovery and overcome barriers to housing and employment. We know there is no single solution out there that is going to solve this crisis, and, as we’ve seen over the past four years, we must continue to attack the crisis from every angle.

On behalf of the Center’s board, I thank Sen. Wayne Langerholc for sponsoring this latest hearing in Ebensburg, and I thank Sen. John Eichelberger and Rep. Frank Burns for joining us. A link to the hearing video is on the Center’s website.

On behalf of the Center’s board, I also thank Dr. Livingston Alexander of the University of Pittsburgh-Bradford for his service to the board. Dr. Alexander retired as president of Pitt-Bradford and from his position on our board this past summer. Dr. Alexander joined the board in August 2010, and since then he has provided great insight and feedback to the Center about our rural communities, which has helped the Center to develop a research agenda that continues to yield timely and important policy considerations for the General Assembly. We wish Dr. Alexander all the best in his retirement. 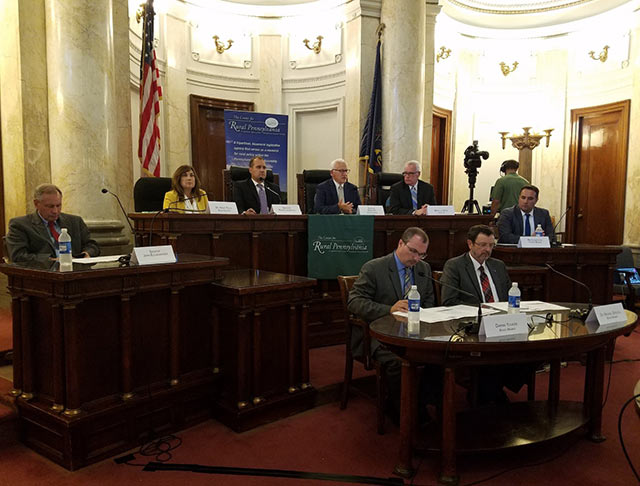 Center Board members and area legislators at the State of Addiction public hearing at the Cambria County Courthouse in Ebensburg, PA. 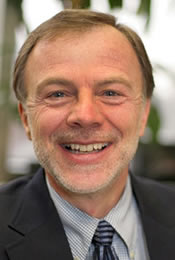 Note: The data source for this Rural Snapshot is the Pennsylvania Department of Health, unless noted otherwise. 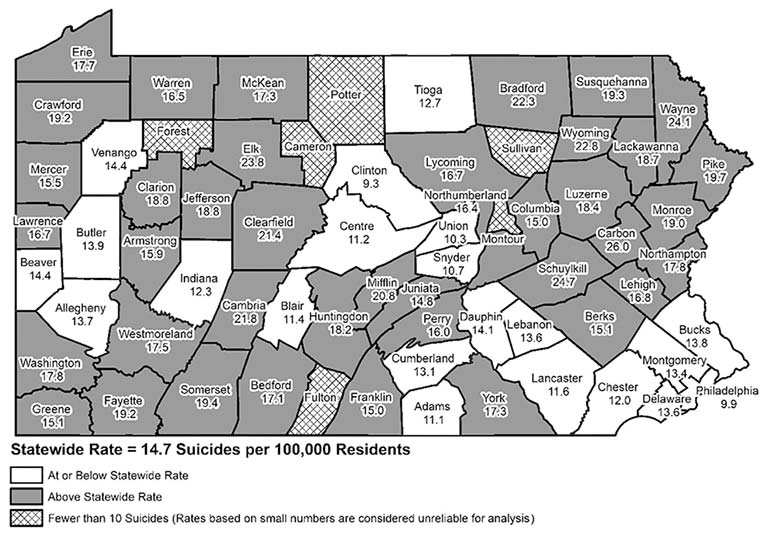 Number of Rural and Urban Pennsylvania Suicide Deaths by Age, 2016

Rural and Urban Pennsylvania Suicides by Gender, 2016
In rural Pennsylvania, 82 percent of suicide deaths were male and 18 percent were female. 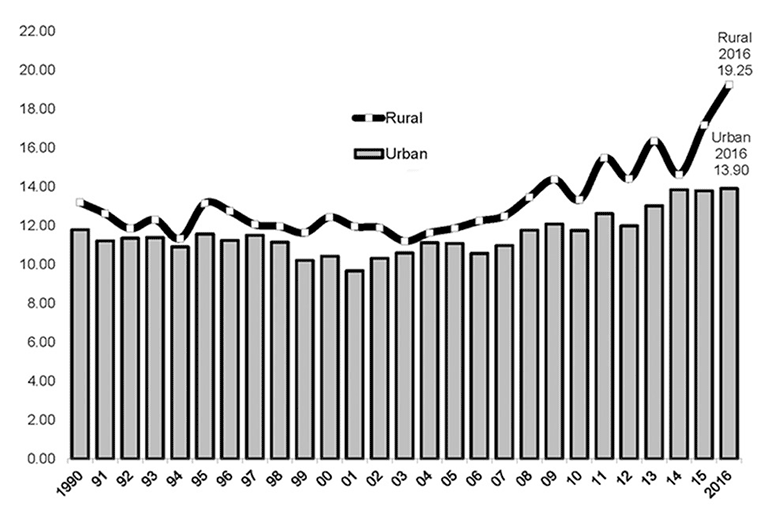 Just the Facts: Born in PA, Live in PA