With current shortages of health care professionals in rural Pennsylvania, community health workers have the potential to play a significant role in the delivery of rural health services, according to research out of Lock Haven University of Pennsylvania. Currently, there is no single definition of a community health worker (CHW). However, the research used the definition from the Human Resources and Services Administration’s Community Health Workers National Workforce Study, which defines CHWs as lay members of communities who work or volunteer with local physical health and/or mental health care systems and usually share ethnicity, language, socio-economic status, and life experience with the community members they serve.

Research results
Results from the surveys, interviews, and focus groups found that CHWs work or volunteer in a variety of agencies and serve a wide range of populations in rural Pennsylvania. Their duties range from working with the elderly to working with infants and children. Depending on the agency and work status, CHW caseloads can be very different. Thirty-nine percent of CHW survey respondents said they had 31 or more cases a month.

According to the CHW survey, 91 percent of CHWs are female, with an average age of about 48. CHWs have worked or volunteered in the field for 9 years, on average, with 76 percent of the respondents being paid workers. The educational background of CHWs varied, and ranged from a high school education to a college degree.

Twenty percent of CHWs earn between $20,000 and $30,000 per year. It was evident from the focus groups and leadership phone interviews that low pay, high turnover, and lack of adequate funding were significant issues for many agencies.

According to the CHW survey, 89 percent of respondents received some type of training to be a CHW. It was evident from the leadership interviews and focus groups that there was a variety of training opportunities being offered to CHWs, depending on the work setting and whether they were volunteer or paid workers. On-the-job training, conference training, certificate programs, shadowing, and formal education were the predominant types of training.

Overall, the research provides an overview of CHWs in 37 rural Pennsylvania counties. While the research was limited by the lack of a clear definition of CHWs, it found that there is currently no official certification process for this job category or standardization of the position. It also found that the number of CHWs is limited by a lack of funding sources. In the medical health care field, CHWs do not have a large source of funding, while in the mental health field, field peer specialists receive Medicaid money and county/state funds.

The research provides several policy considerations for the state legislature and state health and human services agencies. The first concerns the decision on whether CHWs should be certified in Pennsylvania. Others relate to funding solutions to allow CHWs to further assist community members with accessing care.

A copy of the research report, Examination of Community Health Workers in Rural Pennsylvania, is at www.rural.palegislature.us.

Over the past 30 years, the Center has been honored to work with many knowledgeable and dedicated faculty and administrators at the 14 Pennsylvania State System of Higher Education universities, Pennsylvania State University, and University of Pittsburgh branch campuses to research issues that impact our state’s nearly 3.5 million rural residents.

The Center’s research speaks to the widening scope of issues affecting our rural communities, including community and economic development, the growth of healthcare alliances, flood mitigation, special education enrollment and funding, Marcellus Shale development, domestic violence services, homelessness, the financial viability of volunteer fire companies, telehealth services, potential minimum wage increases, and the heroin/opioid epidemic. As always, the goals of our research have been to provide a practical understanding and knowledge of rural Pennsylvania and to identify program and policy options that can have meaningful impact for our state’s rural residents.

Through the Center’s ongoing relationships with state and federal agencies, associations, and organizations, it continues to collect data that help to develop the most comprehensive profile of Pennsylvania’s 67 counties, especially our 48 rural ones. After all, Pennsylvania is home to our nation’s third largest rural population.

Over the years, the Center has also had the privilege to work with members of the Pennsylvania General Assembly and many organizations, institutions and individuals that are dedicated to addressing both the trials and opportunities that are prevalent in our rural communities. From township supervisors to school librarians, community health centers to community colleges, and legislators to executive branch personnel, the Center is often called upon to share its research and data. This reputation extends beyond Pennsylvania, as the Center is recognized nationally for its quality work and research.

We look forward to continuing that work in the years ahead.

On October 26, the Center sponsored a public hearing, the State of Addiction, at UPMC Susquehanna in Williamsport, Pa., to gather information from federal, state and local officials on the current state of the heroin/opioid crisis in Pennsylvania.

More information on the hearing is available on the Center's website at www.rural.palegislature.us. 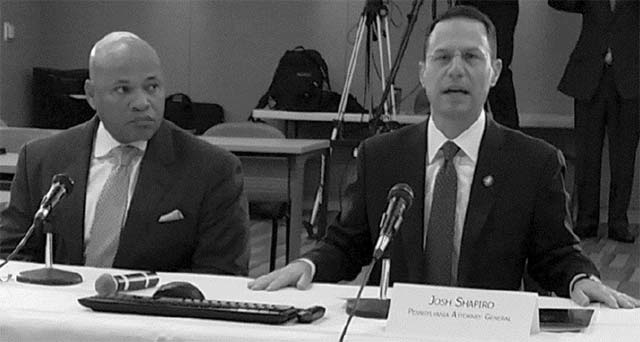 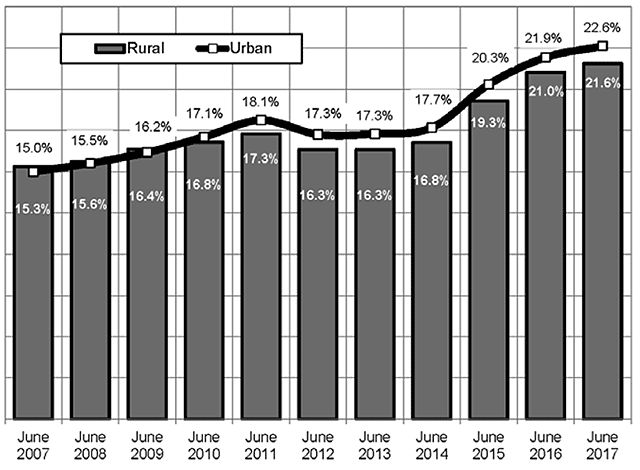 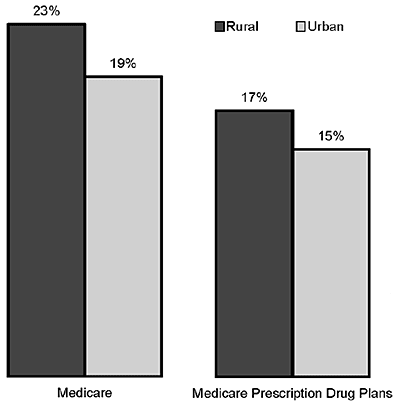 Percent Change in the Number of Uninsured Pennsylvanians Under 65 Years Old, 2005 to 2015 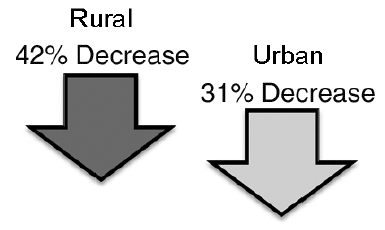 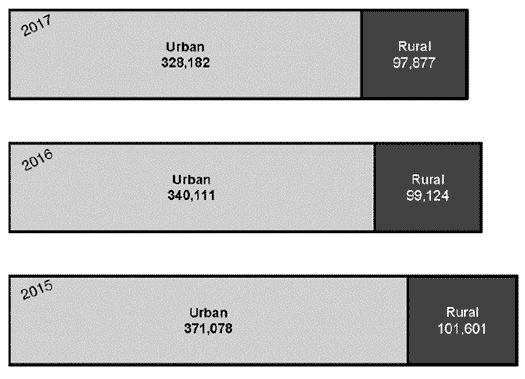 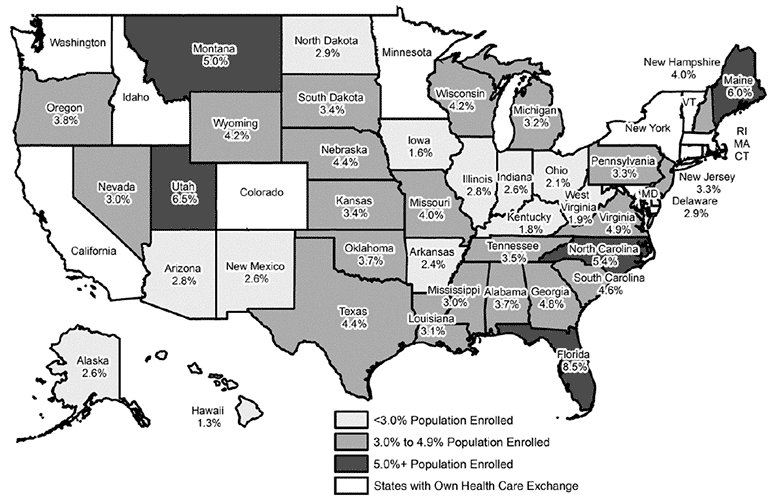 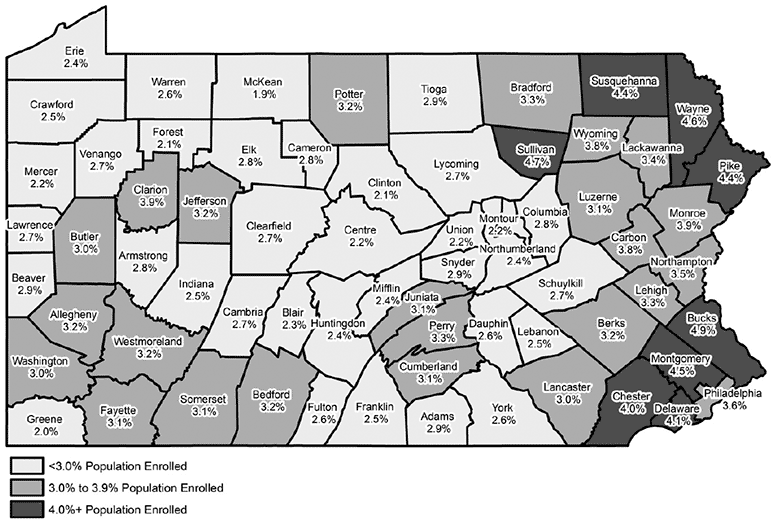 Decline in Retail Establishments and Employment

According to data from the Pennsylvania Department of Labor and Industry (L&I), retail isn’t what is used to be. From 2006 to 2016, there was a decline in both retail establishments and retail employment in Pennsylvania.

The largest declines in rural retail establishments were among furniture stores (19 percent), electronics and appliance stores (16 percent), clothing and accessories stores (12 percent), and motor vehicle and parts dealers (12 percent). The two bright spots among rural retailers were general merchandise stores, which include big box retailers and “dollar” stores, and non-store retailers, which include online and catalog stores. General merchandise stores increased 14 percent and non-store retailers increased 3 percent from 2006 to 2016.

In urban areas in 2016, there were 30,173 retail establishments that employed approximately 479,500 people. Urban retailers represented 12 percent of all urban employers and employees represented 11 percent of the urban workforce. From 2006 to 2016, the number of urban retail establishments and employees each declined 3 percent.

Number of Rural and Urban Pennsylvania Retail Establishments, 2006 and 2016 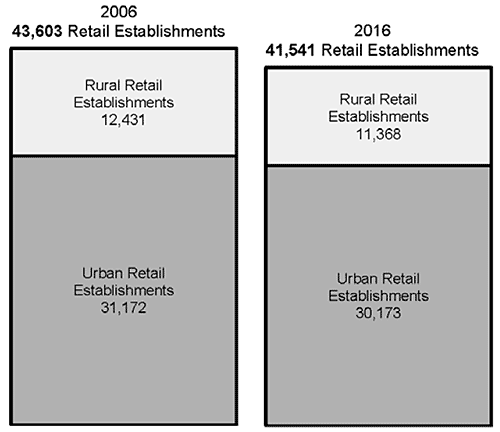 Just the Facts: Living on the Road

Data from the Pennsylvania Department of Transportation show there are more than 42,400 miles of state roadways in Pennsylvania. These roadways include state routes, U.S. routes, and interstate highways but do not include municipal roadways. In 2016, 231 million vehicles, on average, used these transportation arteries each and every day. For many rural Pennsylvanians, their homes are located along these roadways.

Using computer mapping, the Center for Rural Pennsylvania estimated that, in 2010, 2.54 million rural residents lived in a Census block that was within 100 feet of a state roadway. These residents account for 73 percent of the total rural population.

A Census block is the smallest level of geography on which the Census Bureau collects data. In 2010, there were more than 421,500 blocks in Pennsylvania, with an average block encompassing one-tenth of a square mile and having 30 residents.

In 2010, an estimated 6.13 million urban residents lived within 100 feet of a state roadway, or 66 percent of the total urban population.

To understand the characteristics of residents whose homes are located along state roadways, the Center aggregated Census blocks to the Census block group level.