Hospice Use, Availability in Rural Pennsylvania

Hospice is a form of palliative care that optimizes quality of life by anticipating, preventing, and treating suffering, and is typically delivered within the last six months of life. Research has shown that hospice positively impacts patients’ quality of life, and also mitigates the cost of care at patients’ end of life. Despite these reported benefits, hospice remains underused, with substantial geographic variation in hospice availability and use rates. As there was limited information about hospice availability and use in rural Pennsylvania, Dr. Lisa Kitko, Dr. Joel Segel and Elizabeth Thiede of Penn State University, through a grant from the Center for Rural Pennsylvania, analyzed data from the Centers for Medicare and Medicaid to describe the availability and use of hospice care throughout Pennsylvania. The research was conducted in 2019.

The research included the following results:

For a copy of the report, Availability of Hospice in Rural Pennsylvania, click here.

Over the past several weeks, together we have faced an unprecedented and truly challenging situation with the onslaught of COVID-19. We’ve all had to adjust our daily habits to deal with a public health pandemic that continues to affect the way we work, learn, interact, and live.

As I write this message, we are five weeks into the now Pennsylvania-wide, stay-at-home order. We’re anticipating that coronavirus infections will decrease in the coming weeks, but we must remain vigilant to the threats of this devastating virus. While some have said that it may be somewhat easier for our rural counties to adapt to and maintain social distancing, as we have lower population densities in our rural counties than our urban counties, we know our rural communities are not immune to this virus and its effects.

Right now, the virus has infected residents in every Pennsylvania county. And several rural counties are showing dramatic increases in unemployment in vital industry clusters.

As the limitations of the stay-at-home order are lifted, and we return to what will most likely be an adjusted normal, we know it may be harder for our rural areas to bounce back economically. We’re basing this on our analysis of the rural economy after the 2008 recession, Nine Years and Counting: Rural Pennsylvania’s Economy After the Great Recession.

These data and research results all help to keep a necessary focus on our rural communities, and the resources they need to return to the new normal.

We know that the coming weeks and months will be a difficult time for our commonwealth, and our nation. Stay healthy and safe, and remember to follow the advice of the Centers for Disease Control and Prevention, and the Pennsylvania Department of Health.

Finally, while relatively few respondents identified expanding broadband internet access as needing to receive a “higher priority” from state government, the proportion who said this nearly doubled in comparison to a similar survey in 2008, so its importance has increased among respondents. Furthermore, access to the internet was significantly related to attitudes on many issues. Those without internet access at home felt that their communities were less desirable, were less satisfied with the way things are going in Pennsylvania today, and had less trust in government officials and institutions.

For a copy of the full results, Attitudinal Survey of Pennsylvanians, 2019, click here.

Coal Mines by Location and Employment, 20181 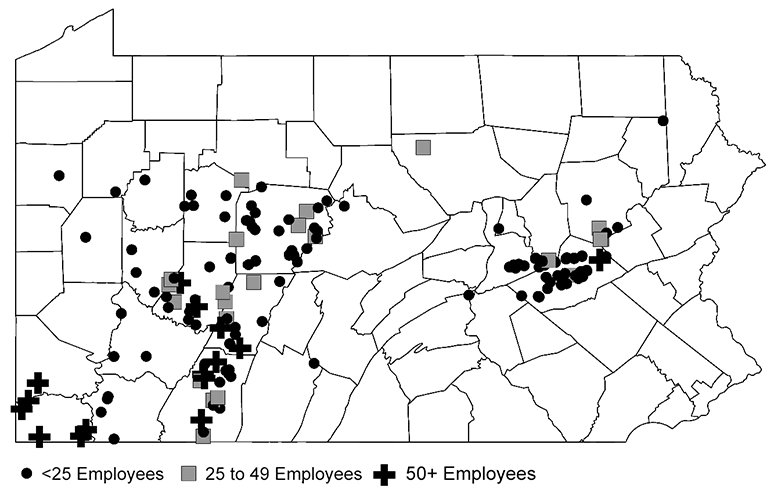 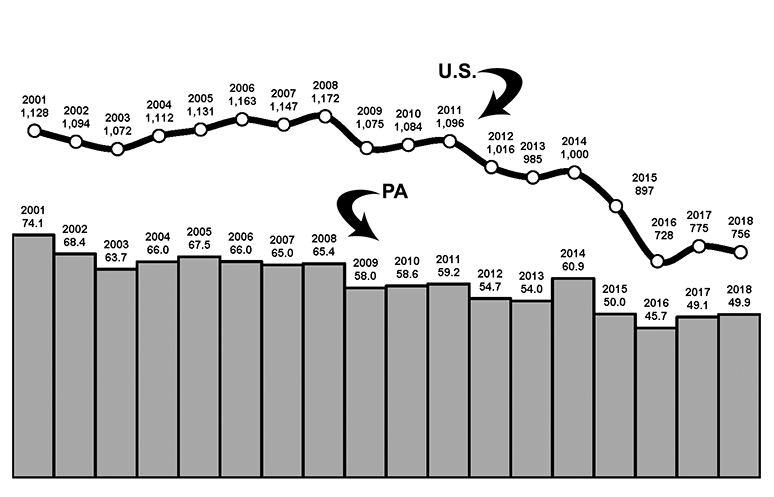 Average Annual Employment in Pennsylvania by Type of Mine, 20181 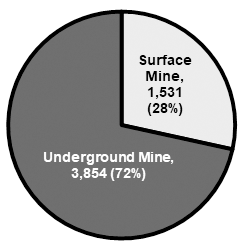 Average Annual Coal Mine Employment in Pennsylvania, 2010 to 20181 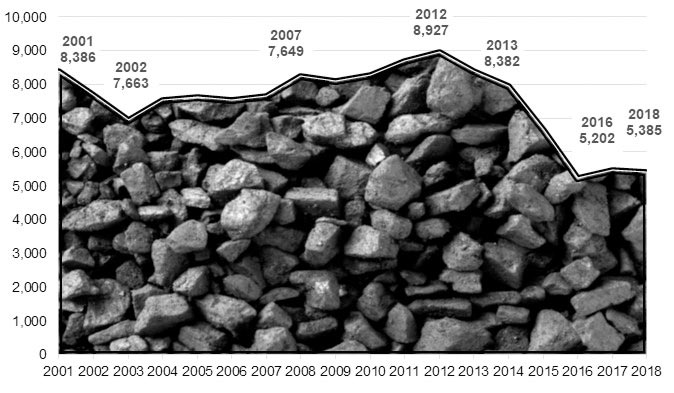 Energy Sources Used to Produce Electricity in Pennsylvania, 1990 to 20182 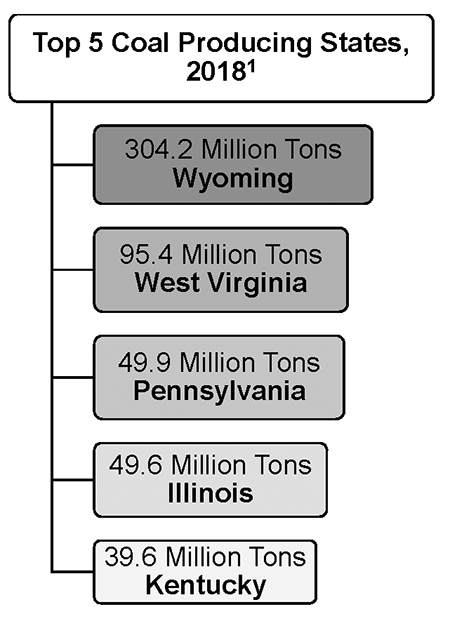 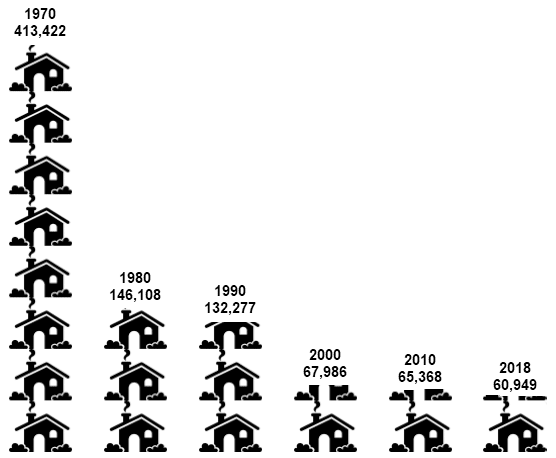 What are some of the common federal definitions of rural?
The two most commonly used federal definitions are from the Office of Management and Budget (OMB) and the Census Bureau. OMB’s definition defines Core Base Statistical Areas as cities and counties that are comprised of Metropolitan Areas (50,000 or more residents) and Micropolitan Areas (10,000 to 49,999 residents). Everything else is often referred to as Non-Metro Areas. The Census Bureau uses the terms Urbanized Areas (Census Blocks that are joined together and have a combined population of 50,000 or more), and Urban Clusters (Census Blocks joined together that have a population of 2,500 to 49,999): everything else is rural.

Will the Center for Rural Pennsylvania update it definition?
Yes, when the results from the 2020 Census are released in 2021, the Center will re-calculate Pennsylvania’s population density, and then update its county, school district, and municipal rural/urban definitions.
Click here for more information.

Pennsylvania had more than 12,700 elected municipal officials in 2018. Less than one-fifth of these officials were women.

In addition to their municipal responsibilities, a higher percentage of female officials volunteered in their communities (81 percent) than male officials (72 percent).

(Note: The survey was mailed to elected municipal officials in municipalities with fewer than 2,500 residents. The statewide survey was sent to a random sample of borough and township officials and had a response rate of 33 percent, with a margin of error of +/-2.6 percent.)

The Center has released a fact sheet, Pennsylvania Fire Company Capacity, 2012 and 2019, which is available here. It is the second in a series based on a 2019 survey of Pennsylvania fire chiefs from volunteer fire companies and combination paid/volunteer companies. The Center conducted the survey in partnership with the Pennsylvania Fire and Emergency Services Institute (PFESI).

The 2019 survey results indicated that: