Recent research indicates that community colleges are a bridge to economic and workforce opportunities in local areas as well. In 2019, Dr. Matt Saboe, Dr. Mia Ocean, and Dr. Simon Condliffe of West Chester University of Pennsylvania conducted research to learn more about the economic impact of rural community college sites in Pennsylvania. The research was sponsored by the Center for Rural Pennsylvania.

Using the economic modeling software IMPLAN and the detailed data provided by five rural community colleges, the research team found that, on average, rural sites (excluding the largest, outlier sites) support about 15 jobs, contribute $722,000 in value-added GRP, and generate about $1.25 million in total output within their local economies. This does not include the future impact of students who use the valuable skills and credentials provided by community colleges to further pursue higher education, find employment, and contribute to Pennsylvania’s economy.

The research indicated that rural community colleges are markedly invested in their communities, yet they face many challenges. Additionally, these colleges do not have access to enough resources to meet their needs. If they had access to adequate resources, they could develop additional partnerships with local industry and work to increase interest in technical fields.

The research suggests that another way to capitalize on government partnerships is to expand the existing rural community college locations through the concurrent-use campus model, where community colleges and PASSHE universities share a location to maximize public spending and minimize student barriers.

For a copy of the report, The Economic Impact of Rural Pennsylvania Community Colleges, click here.

Thank You and Farewell 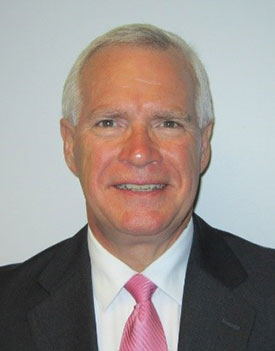 While it should be no surprise to anyone that I am not a fan of heavy metal music, I find that a quote from well-known guitarist Dave Mustaine quite appropriately sums up my departure from the Center for Rural Pennsylvania: “Moving on, is a simple thing, what it leaves behind is hard.”

For 28 years, I have called the Center for Rural Pennsylvania my employer. Ending that was fairly simple: set a date, inform the board, and sign a bunch of forms for retirement. Easy-peasy some would say. But now comes the hard part. How do I bring to an end, or find closure for, years of doing something that has been my passion? I have worked with so many dedicated people, visited every county in Pennsylvania and numerous states for meetings and presentations where I learned more than I ever contributed, and have been a part of the public policy arena so that rural has a voice. And I have worked day in and day out with a board and staff whose talents and commitment are stellar. These all are so very hard to leave behind.

I strongly believe, though, there comes a time when moving on is the right thing to do. Step aside for fresh ideas and new ways of doing things. While my dream job is coming to an end, the friendships and the memories I have made will always remain. Thank you all!

On behalf of the Center Board of Directors and staff, I congratulate Center Director Barry Denk on his upcoming retirement. After 28 years of service to the Center for Rural Pennsylvania and to rural Pennsylvania overall, Barry will retire at the end of July.

For more than a quarter of a century, Barry has been steadfast in his vision to carry out the mission of the Center. Under his direction, the Center has developed and maintained a reputation for being the most reliable resource for information and data on rural Pennsylvania and the citizens who call it home. In Harrisburg, across the Commonwealth, in Washington and beyond, Barry and the Center have been called upon countless times to present at conferences, formal hearings, and forums of all kinds. He is often noted for his passion and personal commitment to his work.

During Barry’s service, the Center: worked with the small network of rural Community and Higher Education Councils to obtain formal state recognition and ongoing funding; supported the establishment of Pennsylvania’s Main Street and Elm Street Programs; funded the pilot program for the statewide Area Health Education Centers; and provided strategic planning for the PA Route 6 Alliance, just to name a few. He has been a board member of the Pennsylvania Rural Health Association, Pennsylvania Downtown Center and Pennsylvania Rural Partners.

Also, through Senate and House Resolutions and gubernatorial appointments, he served on commissions addressing land use planning, poverty, broadband deployment, the Census, and education. He served as staff vice-chair and chair of the Agriculture and Rural Development Committee and staff-vice chair of the Health and Human Services Committee for the National Conference of State Legislatures, and was a charter member of the Rural Policy Research Institute’s State Rural Policy Initiative. In recent years, Barry has championed awareness and action on the opioid epidemic, the fundamental need for high-speed broadband deployment, and rural philanthropy for community and economic development.

I have worked with Barry for almost nine years and know his commitment to the mission of the Center and to rural Pennsylvania is authentic and sincere. While we will miss his leadership, he has certainly earned this next step in life’s path. I hope you all join us in wishing Barry the best in his retirement.

I am pleased to report that the Center’s board has hired Dr. Kyle C. Kopko as the new director. Kyle joins the Center July 1. He comes to us from Elizabethtown College, where he most recently served as Associate Dean of Institutional Effectiveness, Research, and Planning, and as Associate Professor of Political Science. We look forward to welcoming Kyle to the Center and working with him.

As a new era begins at the Center for Rural Pennsylvania, we are confident that the Center will continue its important work on promoting and sustaining the vitality of Pennsylvania’s rural and small communities.

Pennsylvania has long been known as an exporter of teachers and has rarely experienced a shortage of teachers in areas other than the traditional shortage areas of math, science, English Language Learner, and special education. Recent data, however, suggest a growing shortage across the state.

In 2018 and 2019, Penn State Researchers Dr. Ed Fuller, Dr. Andrew Pendola, Dr. Kai Schafft, and Dr. Erica Frankenberg used a variety of secondary data, a focus group, and a survey of principals and superintendents to review the supply and demand of teachers to determine if there are existing, or projected, shortages of teachers in Pennsylvania.

Currently, however, there is a shortage of teachers in Pennsylvania as evidenced by the ratio of newly prepared teachers to the number of beginning teachers hired, the dramatic increase in the number of teachers employed on long-term emergency permits, responses to research surveys, and districts’ indications of shortage areas.

The research found that the shortage is much more acute in specific subject areas and for specific areas of the state. The subject areas include special education, English Language Learner in urban areas, secondary math, and secondary science (physics, chemistry, and other advanced courses). To a lesser extent, evidence also suggests there may be shortages for secondary social studies, foreign language, physical/health education, and fine arts (music and art).

With respect to location, the research indicated shortages in some large city districts and in some rural districts. There is also evidence that many rural districts are experiencing difficulty in finding a sufficient supply of teachers in a wide array of subject areas. These shortages are projected to persist over time.

The primary cause of the shortage in Pennsylvania is the insufficient supply of individuals willing to enter the teaching profession. There are myriad underlying factors influencing this trend, but there has yet to emerge a clear research consensus about all of the factors. Some factors may include compensation, legislative changes to the pension system for teachers, and the cost of higher education in Pennsylvania.

For a copy of the research, K-12 Teacher Supply, Demand, and Shortages in Pennsylvania, click here.

About the data: The data featured here are from the Center for Rural Pennsylvania’s Attitudinal Survey of Pennsylvanians, 2019. The 2019 results are based on a panel survey of 2,008 Pennsylvanians aged 18 and older. The margin of error is +/-2.2% with a 95 percent degree of confidence. This analysis focuses on the responses from the 569 survey participants who were age 18 to 34 years old. Additional data sources are listed where applicable.

Number of Rural and Urban Young Adults and Percent of Young Adult Population in Pennsylvania, 1990 to 2018 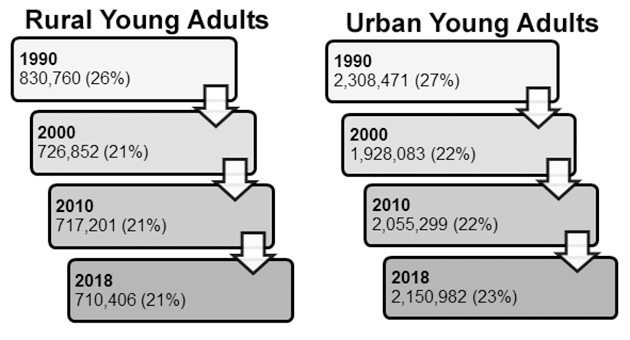 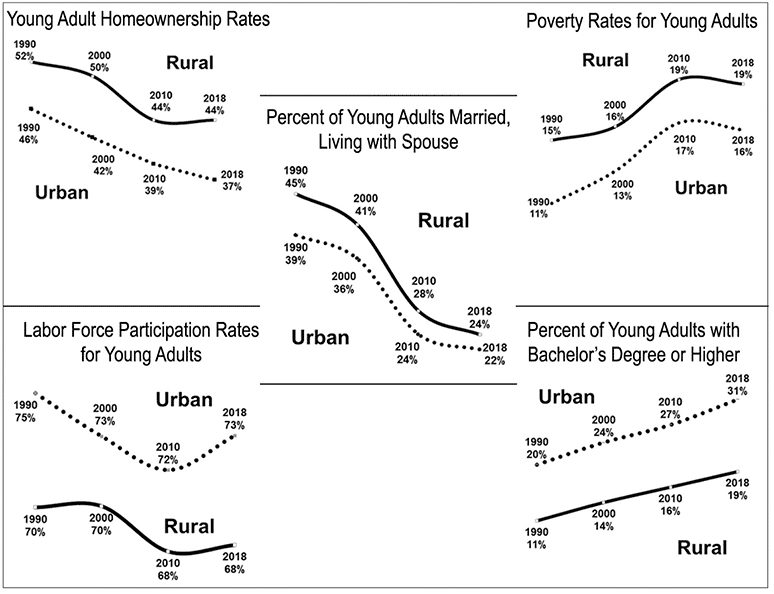 46 percent of rural young adults volunteered in their community to help others either occasionally or often. These individuals tended to be unmarried, not have a college degree, and have incomes under $50,000.

Percent of Rural Young Adults, by Income, Who Rated the Following Indicators in their Community as €œHigh€ Quality, 2019 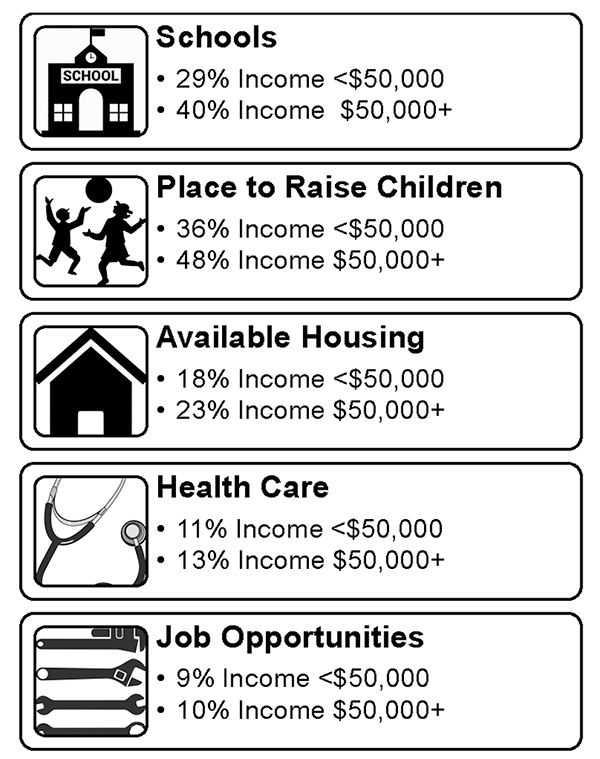 Level of Satisfaction Among Rural and Urban Young Adults in the Way Things are Going in Pennsylvania, 2019 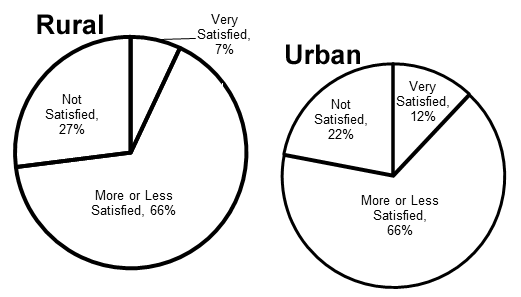 Percent of Rural and Urban Young Adults Who Said the Following Issues Should be Given a Higher Priority in their Community, 2019
(Analysis excludes €œdon't know€ answers.) 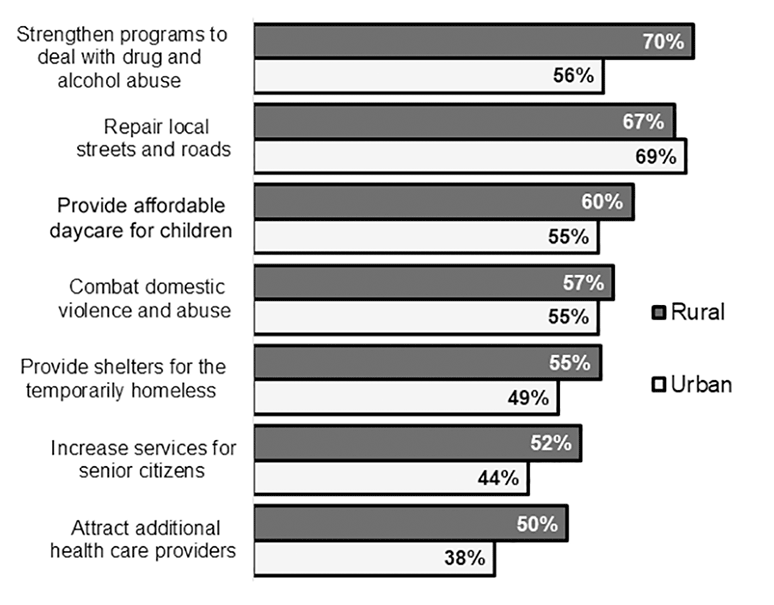 In March 2018, Pennsylvania launched the Overdose Information Network, a centralized repository that tracks overdoses, naloxone administrations, and other drug information, to allow police, public safety, and healthcare professionals to share all types of information related to opioid abuse in their communities. The Pennsylvania State Police maintains the information for the network, and participation in the network is voluntary.

Following is an analysis of the network data covering the period of January 1, 2018 to May 15, 2020. While all overdoses statewide may not be included in the repository, the data that are included provide a better understanding of overdose incidents in Pennsylvania.

Overdoses occurred every day of the week; however, nearly 33 percent of them happened on Fridays and Saturdays. This pattern was evident in both rural and urban areas. Similarly, overdoses occurred around the clock. However, a larger volume of incidents happened in the early evening hours between 6 p.m. and 10 p.m. In both rural and urban areas, more than 25 percent of overdoses happened during this 4-hour period.

Overdose Victims
In both rural and urban areas, overdose victims, on average, were white males between the ages of 25 and 39 years old.

Conclusions
Excluding the pre- and post-pandemic comparison of overdose incidents, the data from January 2018 to May 2020 indicate that overdose incidents are similar in both rural and urban Pennsylvania, reinforcing the harsh reality that the opioid crisis is a statewide crisis that knows no geographic boundaries.

Just the Facts: Keep on Scratching

Urban residents have been busy buying and scratching as well, spending more than $3.24 billion on tickets, or $344 per resident, and winning $2.05 billion, or $218 per resident, in total prize money.

From 2015 to 2019, rural lottery ticket sales increased at a lower rate than urban ticket sales (5 percent and 11 percent, respectively, after adjusting for inflation).