More than locating books and DVDs

Their research, conducted in 2019 and 2020 and sponsored by the Center for Rural Pennsylvania, began with a review of recommendations from the 2010 Joint State Government Commission’s report, The Pennsylvania Public Library Code: Findings and Recommendations. The researchers then analyzed data from 2007 through 2017 collected by the Pennsylvania Office of Commonwealth Libraries to assess library service provision, staff numbers and training, and revenues received from all sources. They used data collected by the Institute of Museum and Library Services through the Public Library Survey to compare Pennsylvania public library revenues, staff and other indicators with those of libraries in other states. These data were supplemented by online surveys completed by library staff and patrons, and by focus groups with staff and patrons at six rural Pennsylvania public libraries.

After reviewing the 2010 report from the Joint State Government Commission, the researchers concluded that the majority of recommendations were followed. The most significant of the recommendations was the codification of the Public Library Code into consolidated statute form. The recommendations related to providing improved and consistent funding have not yet been realized.

The Public Library Survey indicated that the federal government provides little money to public libraries nationwide, representing about 0.5 percent of revenue. Pennsylvania state government was more generous than other state governments in supporting public libraries, as it ranked among the top 15 states for state library funding. However, the research found that local government funding ranked second lowest among all states. Pennsylvania libraries are increasingly reliant on funding from other sources, primarily donations from individuals and community groups, with some grant funding. The research noted that these activities require more time and effort from staff when this time and effort could be used to help library patrons.

To supplement the publicly available data, the researchers conducted surveys with library staff and patrons. Library staff were asked about the services provided to patrons and training associated with those services. Traditional library functions were evident, with a heavy emphasis on assisting patrons with finding reading materials and DVDs. Assistance with digital library services, including e-books, reflected the growing influence technology has on library services. While most library staff reported occasionally assisting with locating information on health issues, substance abuse, and wellness and mental health issues, nearly one-fifth reported having to assist patrons with these topics often or all the time. Library staff reported having high levels of training associated with fulfilling traditional library functions, but less training to address patrons’ questions about health issues, substance abuse, and mental health and wellness. The results did not differ among rural and urban libraries.

Beyond training, libraries face challenges in such areas as funding, physical space, and equipment. Funding was reported as the most significant issue, with nearly three-fourths of respondents seeing this as a problem. On average, respondents reported spending 20 percent of their time on fundraising for the library. Library staff typically reported the library was meeting the demands of its patrons when it came to providing public computers with adequate internet access and bandwidth; however, they expressed challenges in meeting patrons’ needs for meetings or workspace. Respondents from rural libraries more often saw information technology support and transportation as problems than respondents from urban libraries.

Staff turnover, while a challenge for urban libraries, was not an issue for rural libraries. Patrons interviewed uniformly shared positive experiences with their libraries. And, library staff focus groups shared their efforts to bring more patrons to the library. Data from the PLS bear out these efforts with an increased number of participants in library programs despite an overall decline in the number of visitors and borrowers.

Overall, the research found that libraries are meeting community needs and strengthening individual human capacity within their communities.

Click here for the full report, The Role of Rural Public Libraries in Providing Access to Online Government Services.

We Want to Hear from You

We're surveying our readership to learn how you use our information and what rural issues you might be interested in learning more about. Click here to take the survey. It should take about 5 minutes to complete, and will be available until September 30. Thank you!

Throughout the year, and through these strange and unusual times, there is one thing that we can always count on, and that’s change.

Here at the Center for Rural Pennsylvania, we, like everyone else, have been adapting to changes brought about by the coronavirus. Where we work and how we work, in terms of added safety precautions, have all changed since the beginning of the year, but we continue to conduct business as usual.

Other changes, thankfully not associated with the coronavirus, also have been happening among our staff and our board.

In July, we bid farewell to former Center Director Barry Denk, and welcomed new Center Director Dr. Kyle Kopko. When the board hired Kyle, it was confident that his strong research and analytical background and his focused leadership capabilities would continue to drive the Center forward in its mission to promote and sustain the vitality of Pennsylvania’s rural and small communities. After only a few months, I can say that the board should be confident in its decision, as Kyle has been working hard to get to know the diverse landscape of rural Pennsylvania and the many issues and opportunities that affect our rural communities. For more about Kyle, see the article below.

In August, we bid farewell to Board Member Dr. Stephan Goetz. Dr. Goetz first joined the board in 1999, and he was the Center’s longest serving member among our current board. Over these many years, Dr. Goetz has provided great insight and feedback to the Center about our rural Pennsylvania communities, and rural communities across our nation, and that has helped the Center to develop a research agenda that continues to yield timely and important policy considerations for the Pennsylvania General Assembly. We wish him well and thank him for his longstanding service.

In the coming months, we are not sure of what other changes may come our way, but rest assured, whatever may come, we will continue our work on serving Pennsylvania’s nearly 3.4 million rural residents and the communities we call home. 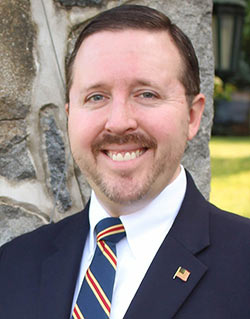 On July 1, the Center for Rural Pennsylvania Board of Directors welcomed Kyle C. Kopko, Ph.D., as the Center’s new director. Dr. Kopko succeeds Barry L. Denk, who retired from the Center at the end of July after 28 years of service.

Dr. Kopko most recently served as Associate Dean of Institutional Effectiveness, Research, and Planning, and Associate Professor of Political Science at Elizabethtown College. He earned his Ph.D. in political science from The Ohio State University in 2010. Dr. Kopko has authored or co-authored more than 30 scholarly publications, and he regularly speaks on a wide range of policy and political topics. His research has also received national and international media attention in numerous outlets, including The Wall Street Journal and The New York Times.

“I am honored to join the Center for Rural Pennsylvania,” Dr. Kopko said. “The Center’s outstanding reputation is the result of the hard work of the Center’s Board of Directors and staff.  I am especially grateful for Barry Denk’s years of service to the Center. Under Barry’s leadership, the Center established itself as the preeminent source of information and data on rural Pennsylvania communities. I look forward to working with the Center’s board and staff, and serving the millions of people who live and work in rural Pennsylvania.”

Managers/administrators and secretaries working in Pennsylvania’s 2,562 municipalities were invited to participate in the survey. A total of 388 municipal employees responded to the survey, for a response rate of 15.1 percent.

Based on these and other findings, the researchers recommended several policy considerations, including: resource pooling among different municipalities to share IT staff with security expertise; periodic assessment of information systems security readiness among municipalities to monitor progress or any potential deterioration; and written policies for enforcing sound, daily information systems security practices.

Percent of Pennsylvania Population, by County, with Public Library Cards, 2018 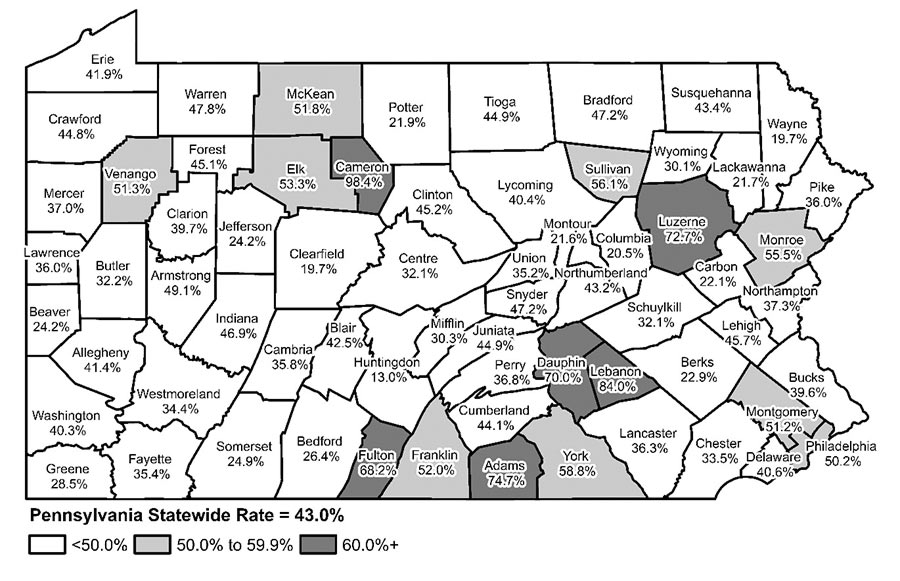 Percent of U.S. Population, by State, with Public Library Cards, 2018 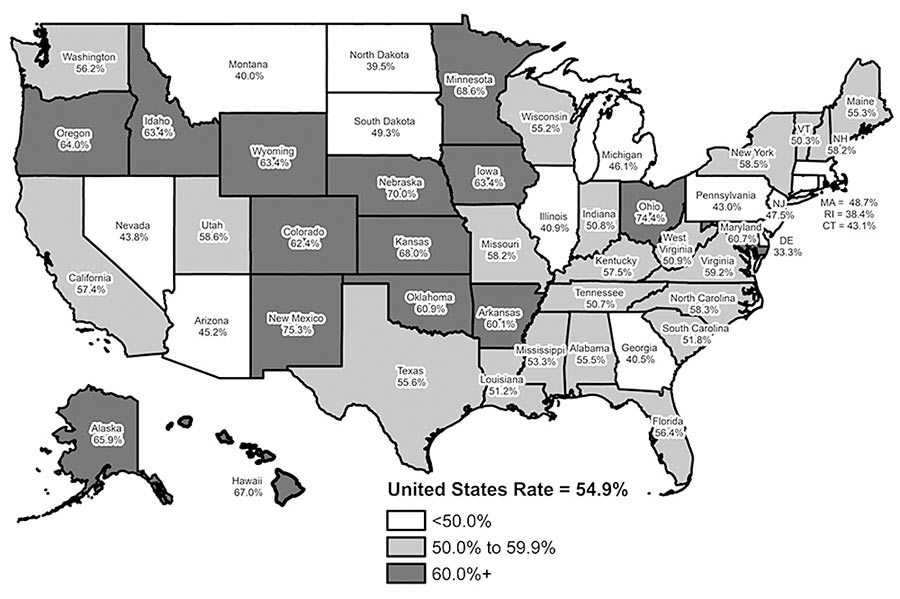 Sources of Pennsylvania Library Revenues, 2018
(Note: Graphs exclude federal revenues, which were less than 1 percent in both rural and urban libraries.) 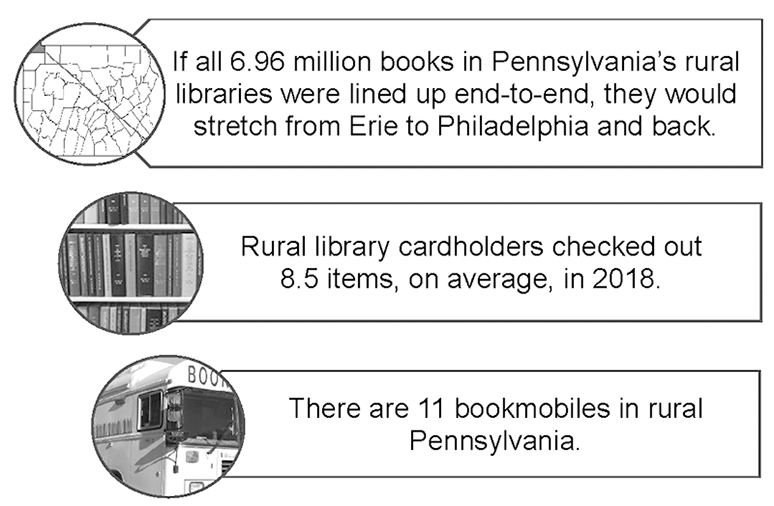 Library Circulation* per Capita, in Rural and Urban Pennsylvania and U.S., 2008 and 2018
* Number of items checked-out of library 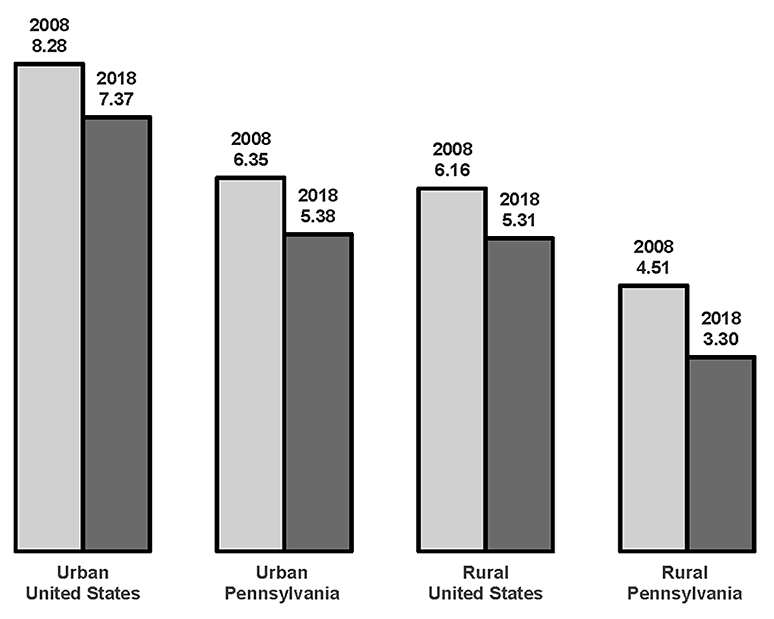 According to data from the U.S. Small Business Administration, 165,891 Pennsylvania businesses and nonprofit organizations participated in the Paycheck Protection Program (PPP). This federal loan program was created through the CARES Act (March 2020) to provide small businesses (<500 employees) with funds to pay up to 8 weeks of payroll costs, including benefits. Funds may also be used to pay interest on mortgages, rent, and utilities. The PPP loans will be forgiven if employers maintain or quickly rehire employees during the 8-week period as well as maintain salary levels.

The Center for Rural Pennsylvania analyzed the data on PPP participation at the ZIP Code level. Using the employers’ ZIP Codes, the Center aggregated the data to Census Bureau ZIP Code Tabulation Areas (ZCTAs). ZCTAs are generalized areal representations of U.S. Postal Service Zip Codes. Eighteen participants either had incomplete ZIP Codes or out-of-state ZIP Codes. These participants were excluded from the analysis.

Rural employers retained 317,033 employees, or 109 employees per 1,000 residents. Urban employers retained nearly five times that number, with 1.50 million or 151.8 per 1,000 residents. The top three industries in which rural employees were retained were: other business support services, full-service restaurants, and religious organizations. The top three industries in which urban employees were retained were full-service restaurants, law offices, and all other business support services.

Although it is too early to assess the full impact of the PPP in Pennsylvania, the program did keep paychecks coming to 23 percent of the rural workforce and 31 percent of the urban workforce.

Click here for the factsheet, Rural Pennsylvania and the Paycheck Protection Program, 2020. 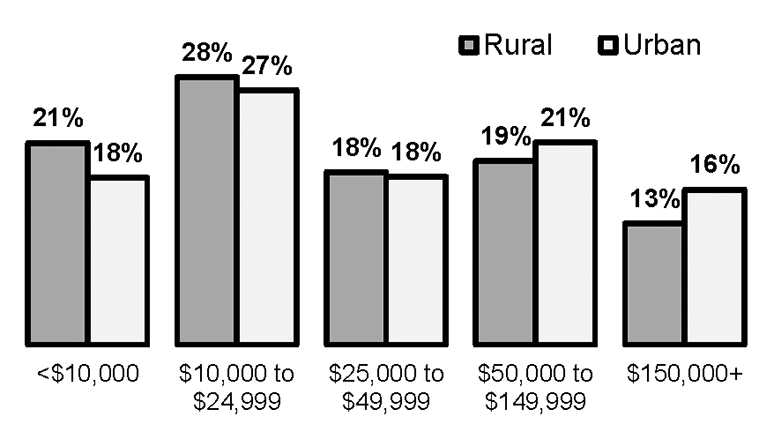