In 2019, the Center sponsored two research projects to get baseline data on Pennsylvania public school sports participation. The results are now in and here’s what the research found.

The research suggests that requiring the total number of students involved in sports, regardless of the number of teams in which they participate, to be reported would help when comparing urban and rural school sports teams, as the qualitative data suggest that rural schools may be supportive of multi-sports athletes.

The research also noted that reporting of school policies, such as pay-to-play policies, late bussing, and intramural program participation, could help with evaluations of the effectiveness of these practices in encouraging sports participation.

We're Getting a New Look

In the coming months, the Center for Rural Pennsylvania is going to change its look by introducing a new logo, and an updated newsletter and website. We're excited to share our updated look, but rest assured, our commitment to rural policy research and data analyses will remain strong. Stay tuned.

I’ve heard it many times: this has been a year like no other. What an appropriate way to describe 2020. With the pandemic still affecting Pennsylvania, the nation, and the world, we are all trying to manage our everyday lives and cope with the challenges and threats of COVID-19. It doesn’t matter if you live in a rural area, an urban area, or anywhere in between. This virus knows no boundaries.

Many of the articles in this issue focus on the pandemic and its impact in Pennsylvania. The two most devastating have been the lives we’ve lost and the number of people who have fallen ill to the virus.

Another disturbing impact is the increase in overdose deaths in our rural counties. Information compiled by the National Institute of Environmental Health Sciences indicates that stress and social isolation may make it much more difficult for people to maintain their mental health, especially people who are in recovery. If you know of someone who is struggling with their recovery and needs to find treatment, please call 1-800-662-HELP. You can also visit the Pennsylvania Department of Drug and Alcohol Program’s website at https://apps.ddap.pa.gov/gethelpnow/.

As I write this message, the number of COVID cases are continuing to rise. During this time of thanksgiving, we can’t thank our health care workers enough for everything they have done over these many months. These front-line workers continue to put their own health and lives on the line to help us fight against this pandemic. We also owe huge thanks to other front-line workers €“ our grocery store workers, restaurants, manufacturers, and police and fire personnel, for example €“ who also have worked tirelessly throughout the pandemic, and who continue to do so.

As this peculiar year comes to an end, I’d like to thank all of our board members for the work they do on behalf of the Center and rural Pennsylvania.

Rep. Garth Everett will be leaving the board this year as he retires from the legislature. We truly appreciate his service to the board, and the knowledge and guidance he has provided over the years to expand the work of the Center. On behalf of the board and staff, I wish him all the best in his retirement, and in the years ahead.

I also wish all of you healthy and happy holidays. 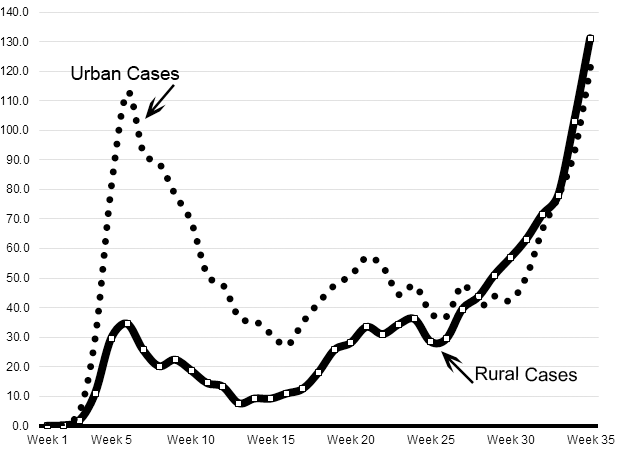 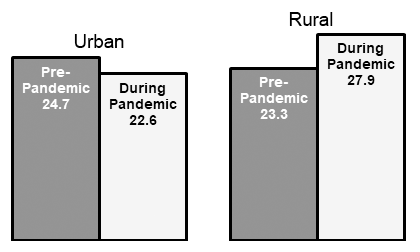 Unemployment Rates in Rural and Urban Pennsylvania, September 2019 to September 2020
(Rates are not seasonally adjusted) 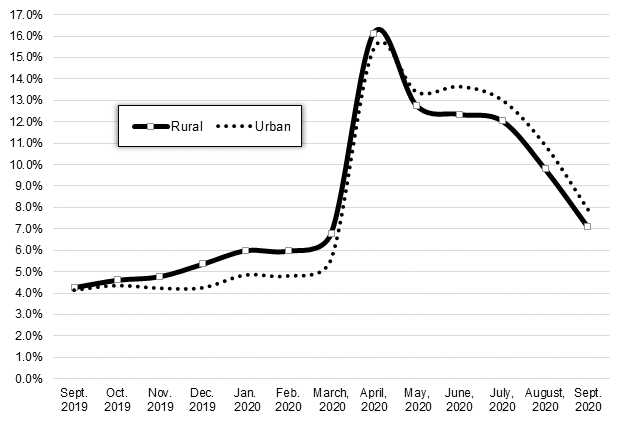 Note: Except for expenditure data, all data are for Pennsylvania public school fall sports for Grades 7 - 12. Fall sports were defined using the Pennsylvania Interscholastic Athletic Association list of fall sports. The data may include students who participate in two or more sports during the same season. Seventeen school districts had either no data or incomplete data. These districts were excluded from the analysis. Data sources: Pennsylvania Department of Education, National Federation of State High School Associations, and the 2018, 5-year Average, American Community Survey, U.S. Census Bureau 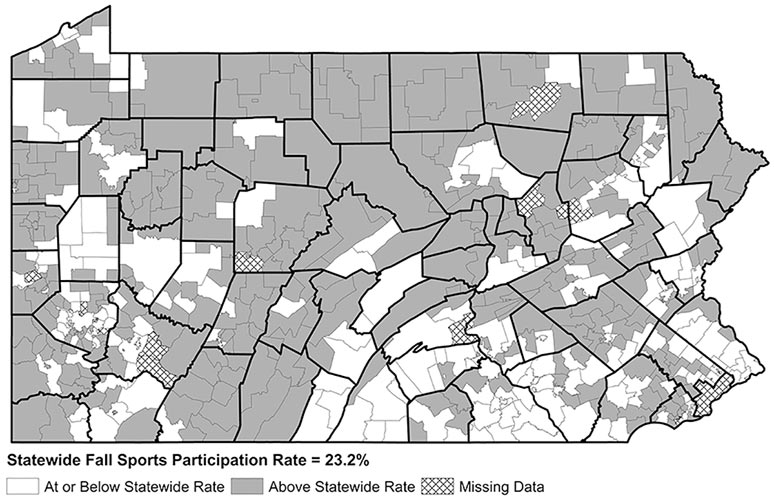 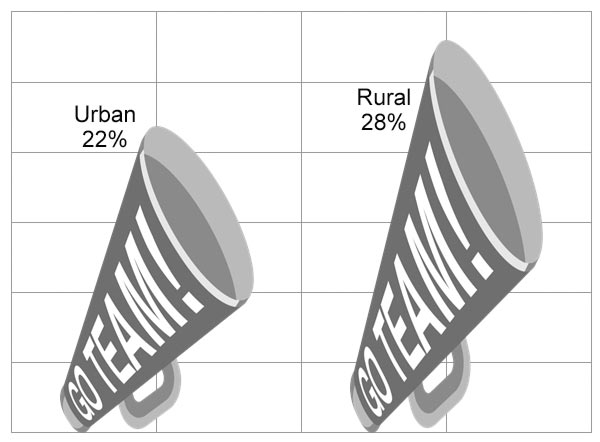 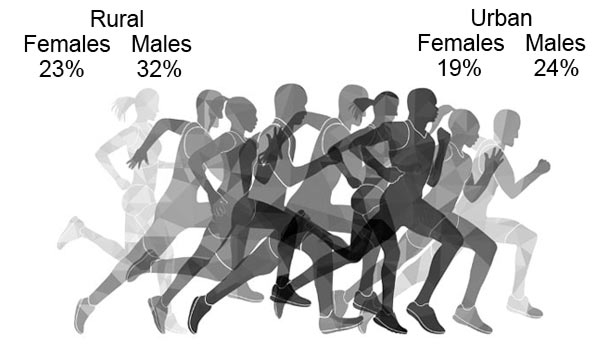 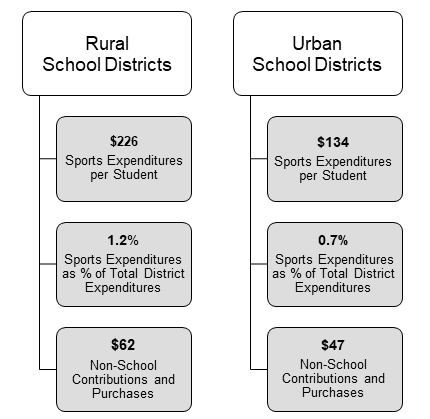 Percent of Rural and Urban Students Participating in Fall Sports by Type, 2018-2019 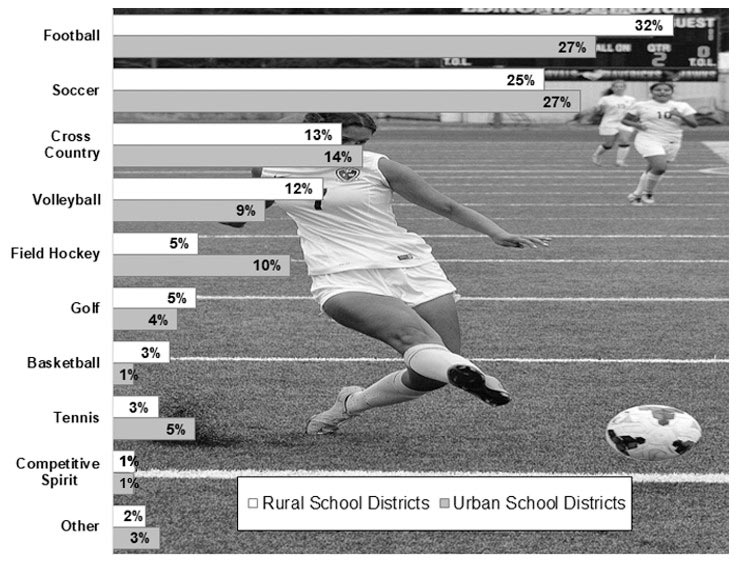 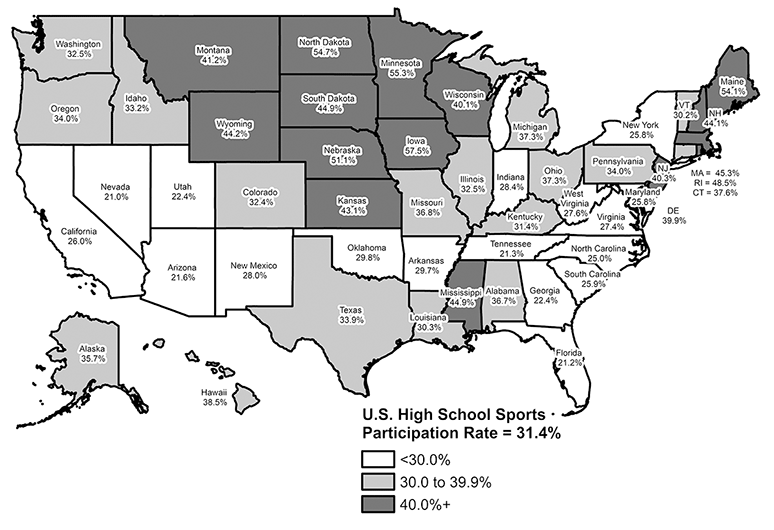 Decline in Fire Calls Across Pennsylvania

Here’s a bit of good news: the number of fire calls has declined in Pennsylvania.

The counties with the largest declines were Cameron, Butler, and Armstrong, each with a decline of more than 40 percent. Adams County was the only county with an increase (2 percent).

Data are not yet available on the types of fire calls over this period, so it’s difficult to determine why there has been a decline. However, it is probably safe to guess that the change was not entirely caused by fewer drivers on the road. Data from 2015-2017 show that only 8 percent of rural fire calls and 6 percent of urban fire calls were for vehicle fires.

Fire Calls in Rural and Urban Pennsylvania, March to July 2019 and 2020 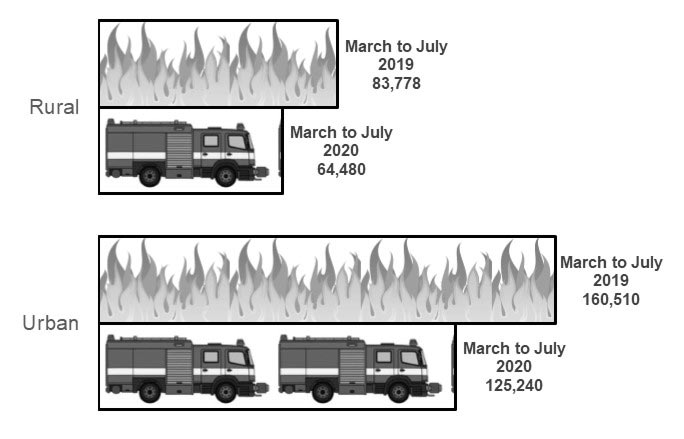 The COVID-19 pandemic is creating a slew of economic difficulties for rural and urban Pennsylvania families, one of which is hunger.

Data from the Pennsylvania Department of Human Services indicate that there was an increase in the number of rural and urban Pennsylvanians participating the in Supplemental Nutrition Assistance Program (SNAP).

To qualify for SNAP assistance in Pennsylvania, a three-person household must have a monthly income of less than $2,311.

From March to July 2020, 452,884 rural Pennsylvanians, on average, participated in SNAP, which was a 4 percent increase from the same five-month period in 2019. In urban Pennsylvania, 1.40 million residents, on average, participated in SNAP from March to July 2020, an increase of 6 percent from the same period in 2019.

At the national level, the most current SNAP enrollment data from the U.S. Department of Agriculture are from April 2020. Data from March and April 2020 show that more than 40 million individuals, on average, were enrolled in SNAP. This was a 7 percent increase from March through April 2019, on average.

The percent of rural Pennsylvanians enrolled in SNAP from March to July 2020 was positively correlated with the average unemployment rate during this period. This means that as the unemployment rate increased, so did SNAP enrollments. There was, however, no significant correlation between SNAP enrollment and the number of COVID-19 cases per capita. This same pattern also occurred in urban Pennsylvania.

Percent of Rural and Urban Pennsylvania Residents Receiving SNAP, March to July 2019 and 2020 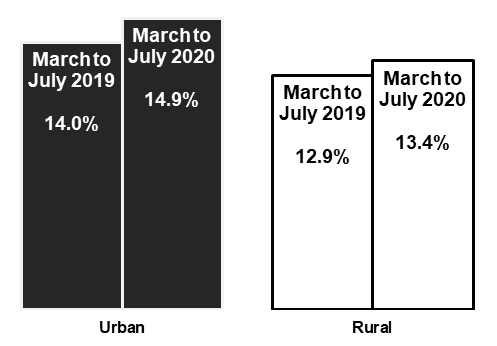