Specifically, the research produced estimates of the foreign-born share of rural Pennsylvania’s workforce (defined as individuals aged 16-64 years) overall and across different regions within the state, described their social and economic characteristics, identified their levels and sources of income, and tracked changes in these outcomes over time.

Foreign-born members of the rural workforce are split with respect to educational attainment. More than 30 percent have a bachelor’s degree or higher, while 20 percent did not complete high school. Also, a disproportionate share, or more than one in five, live in families with incomes below poverty.

The research found shifts in the socioeconomic profile of the rural foreign-born workforce population since 2000, which suggest growing disadvantages and challenges to socioeconomic integration, with declining levels of educational attainment and English language skills, and increasing rates of poverty.

Rural foreign-born workers also were more likely than native-born workers to have jobs in the personal services, transportation, and agriculture, forestry and fisheries industries.

The results of the research on income sources suggest broad similarities between foreign- and native-born Pennsylvanians living in rural and urban areas. The differences that emerged are complex and do not align neatly with any particular narrative of U.S. immigration, whether positive or negative.

The research offers a number of potential focus areas for policymakers. These include renewed efforts to improve and make accessible English language training and adult learning/training opportunities, as well as attention to programs to reduce poverty. The diverse socioeconomic circumstances among the rural foreign-born also underscore the challenges to developing widely applicable policies.

2019 is quickly coming to a close, and as I look back over this past year, I am once again encouraged by the impressive work of the Center for Rural Pennsylvania. Like years past, the Center continues to support and publish research that contributes solid data and important policy considerations on a wide range of topics that are important to rural Pennsylvania.

This past year, the Center released notable research on the availability and access to broadband internet service across Pennsylvania, the economic benefits of our state forest system, the availability of medication-assisted treatment for opioid use disorder, the incidence of youth obesity in Pennsylvania, and a review of legislation and regulations to control invasive species in Pennsylvania. This month, we released two additional research reports on the foreign-born workforce in Pennsylvania, and the status of oral health care for low-income children, which are featured on Pages 1 and 3, respectively. Each of these research projects and resulting reports provide important information that affects our economy, health, and social well-being.

We plan to continue that work in 2020. The Center’s Board of Directors will be meeting in Williamsport, Pa., in December to review research grant proposals, and we look forward to sharing the news about our 2020 grant recipients with you in January.

You can also count on our continued analyses and presentation of data that is important to rural Pennsylvania, and our state as a whole. A sample of some of the interesting information that we keep tabs on is on Pages 4 and 5, the top farm commodity groups by county. As you can see from the map, agriculture is an important industry in all of our 67 counties.

And speaking of counting, 2020 will be an important year for Pennsylvania and our nation as a whole, because of the 2020 Census. Throughout this past year, Center staff has been reminding residents of the importance of the Census in its many presentations to various groups across the state. You’ve probably noticed the Census-related articles in this newsletter over the past year as well. We want to continue reminding all residents of the importance of the Census, which is a Constitutional requirement. The distribution of many public and private sector resources is based on Census data, and our voice in Washington is based on our population count. According to the Census, in March 2020, the majority of people will get a letter with information on taking the survey online, while some people may still receive the paper survey. No matter which version you receive, please complete the form. Let’s all do our part to be counted.

Cavities continue to be the most common chronic disease in children and adolescents between the ages of 6 and 19, according to the Centers for Disease Control and Prevention (CDC) (2016). CDC data indicate that income level is a significant factor in determining a child’s risk for developing cavities; specifically, the lower the household income, the higher the rate of untreated cavities.

Researchers Lisa Davis, Kelly Braun, and Myron R. Schwartz used data from the U.S. Census Bureau, the Pennsylvania Departments of Human Services and Health, and the American Dental Association to examine the oral health component of the Medical Assistance (MA) program, the Children’s Health Insurance Program (CHIP), and the school oral health program. They also reviewed the supply and geographic distribution of dentists in Pennsylvania.

Here’s a short summary of what they found:

The full report, Oral Health Status of Low-Income Children in Pennsylvania: A Rural-Urban Comparison, is here. 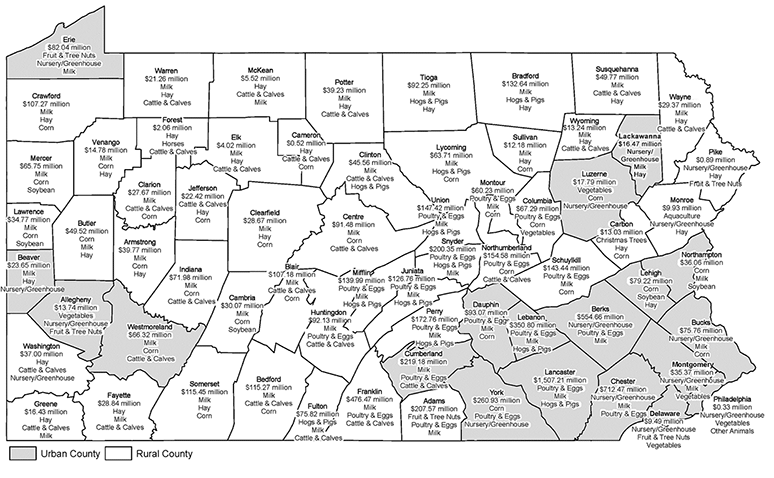 In the fall of 2008, elementary school teachers in rural public school districts welcomed more than 30,900 students to the first grade. More than a decade later, in 2018, these teachers greeted nearly 3,600 fewer first grade students. And, according to enrollment projections by the Pennsylvania Department of Education, in 2028, teachers will be saying good morning to almost 1,300 fewer first graders.

The Pennsylvania Department of Education’s enrollment projections are based on the school retention model. This model includes factors such as students progressing from one grade to the next and birth rates. Details on this model can be found on the department’s website. 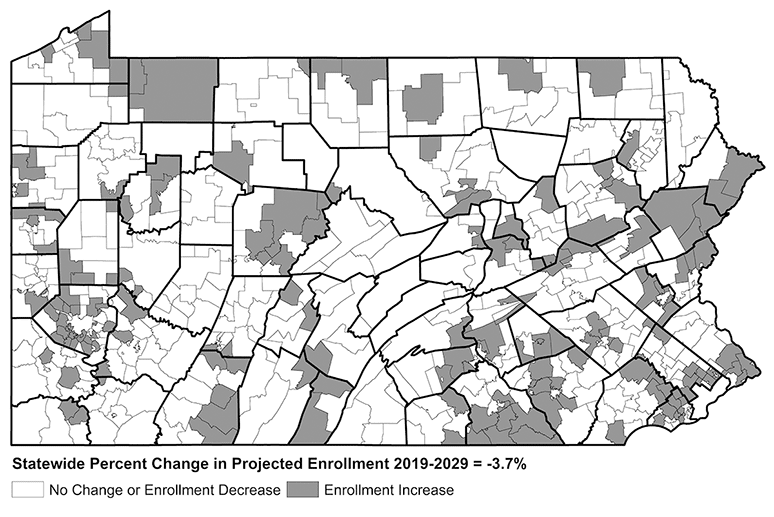 Just the Facts: Crimes and Arrests

The number of crimes and arrests in both rural and urban Pennsylvania counties decreased from 2013 to 2017, according to Uniform Crime Reports from the Pennsylvania State Police.

Part 1 reported violent crimes decreased at a higher rate in urban counties than in rural counties (7 percent and 3 percent, respectively). Violent crimes, which include murder and non-negligent manslaughter, rape, robbery, and aggravated assault, decreased in 34 counties, 25 of which are rural.

From 2013 to 2017, reported drug-related crimes doubled in eight counties, all of which are rural.